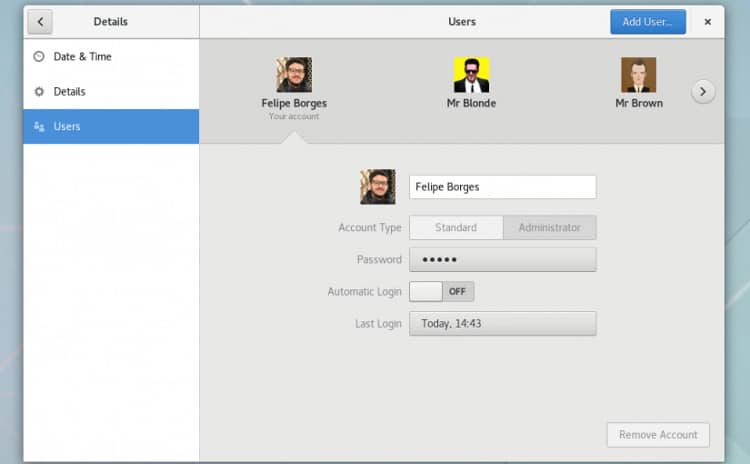 GNOME desktop environment is all set to offer a new users panel. Ahead of the final release, the open source community has received the first glimpse of the upcoming development that will be featured in GNOME 3.24.

The new users panel design on GNOME 3.24 is based on a single-page concept. It comes with the Carousel as the main feature, and there are up to three alphabetically sorted system users on the top.

Unlike the previous two-column interface, the single-page experience on the new users panel includes pagination that lets you easily move from one user to another. The panel also gets the keyboard, printers and mouse options as the new Settings.

First beta is about to arrive

The GNOME developers are planning to launch the final 3.24 version in March. Meanwhile, you can experience all the latest features of the desktop environment through the first beta release. The beta version includes the ability to handle APT and Snap URLs to offer quicker installation of apps and a faster experience than the previous GNOME build.

With a native support for APT and Snap URLs, GNOME will allow you to install applications directly from the links that come in apt:// and snap:// formats. You can also install Flatpak runtimes at the time of update process through the new updates panel.

The first beta version of GNOME 3.24 additionally packs with some bug fixes and performance improvements. It does not catch the firmware during its download. Likewise, the environment generates a warning messaging when you remove a plugged device while performing any major firmware installations.

Darktable 4.0 Is A Significant Upgrade To The Open Source Lightroom Alternative

GitHub Copilot Is Only Effective Because It Steals Open Source Code

Darktable 4.0 Is A Significant Upgrade To The Open Source Lightroom...