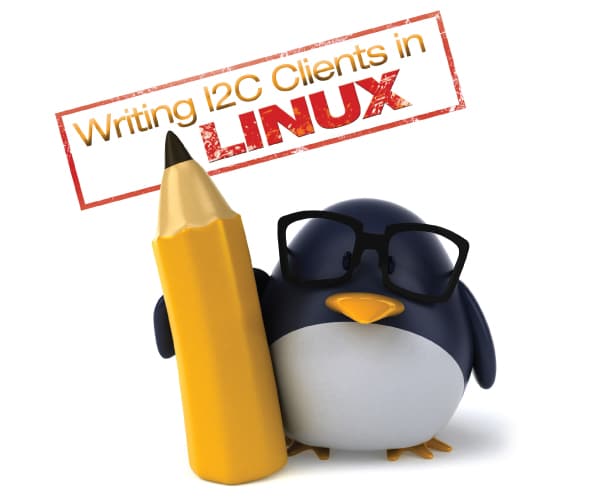 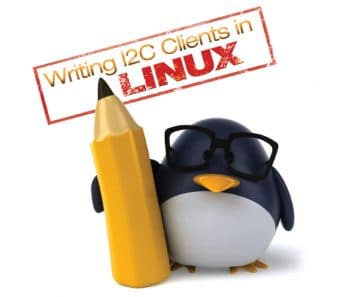 I2C is a protocol for communication between devices. In this column, the author takes the reader through the process of writing I2C clients in Linux.

I2C adapter: There can be multiple I2C buses on the board, so each bus on the system is represented in Linux using the struct i2c_adapter (defined in include/linux/i2c.h). The following are the important fields present in this structure.
bus number: Each bus in the system is assigned a number that is present in the I2C adapter structure which represents it.

I2C algorithm: Each I2C bus operates with a certain protocol for communicating between devices. The algorithm that the bus uses is defined by this field. There are currently three algorithms for the I2C bus, which are pca, pcf and bitbanging. These algorithms are used to communicate with devices when the driver requests to write or read data from the device.

I2C client: Each device that is connected to the I2C bus on the system is represented using the struct i2c_client (defined in include/linux/i2c.h). The following are the important fields present in this structure.
Address: This field consists of the address of the device on the bus. This address is used by the driver to communicate with the device.

Name: This field is the name of the device which is used to match the driver with the device.
Interrupt number: This is the number of the interrupt line of the device.
I2C adapter: This is the struct i2c_adapter which represents the bus on which this device is connected. Whenever the driver makes requests to write or read from the bus, this field is used to identify the bus on which this transaction is to be done and also which algorithm should be used to communicate with the device.

I2C driver: For each device on the system, there should be a driver that controls it. For the I2C device, the corresponding driver is represented by struct i2c_driver (defined in include/linux/i2c.h). The following are the important fields defined in this structure.

Driver.name: This is the name of the driver that is used to match the I2C device on the system with the driver.

Probe: This is the function pointer to the drivers probe routine, which is called when the device and driver are both found on the system by the Linux device driver subsystem.
To understand how to write I2C device information and the I2C driver, lets consider an example of a system in which there are two devices connected on the I2C bus. A description of these devices is given below.
Device 1
Device type: EEPROM
Device name: eeprom_xyz
Device I2C address: 0x30
Device interrupt number: 4
Device bus number: 2
Device 2
Device type: Analogue to digital converter
Device name: adc_xyz
Device I2C address: 0x31
Device interrupt number: Not available
Device bus number: 2
Writing the I2C device file
I2C devices connected on the system are represented by struct i2c_client. This structure is not directly defined but, instead, struct i2c_board_info is defined in the board file. struct i2c_client is defined using struct i2c_board_info structure by the Linux I2C subsystem, the fields of the i2c_board_info object is copied to i2c_client object created.

where,
busnum = the number of the bus on which the device is connected. This will be used to identify the i2c_adapter object for the device.
info = array of struct i2c_board_info object, which consists of information of all the devices present in the bus.
len = number of elements in the info array.
For our example system, I2C devices are registered as follows:

What the i2c_register_board_info does is link the struct i2c_board_info object in __i2c_board_list, which is the global linked list.
Now, when the I2C adapter is registered using i2c_register_adapter API (defined in drivers/i2c/i2c-core.c), it will search for devices that have the same bus number as the adapter, through the i2c_scan_static_board_info API. When the i2c_board_info object is found with the bus number which is the same as that of the adapter being registered, a new i2c_client object is created using the i2c_new_device API.
The i2c_new_device API creates a new struct i2c_client object and the fields of the i2c_client object are initialised with the fields of the i2c_board_info object. The new i2c_client object is then registered with the I2C subsystem. During registration, the kernel matches the name of all the I2C drivers with the name of the I2C client created. If any I2C drivers name matches with the I2C client, then the probe routine of the I2C driver will be called.
Case 2: In some cases, instead of the bus number, the i2c_adapter on which the device is connected is known; in this case, the device is registered using the struct i2c_adapter object.
When the i2c_adapter is known instead of the bus number, the I2C device is registered using the following API:

where,
adap = i2c_adapter representing the bus on which the device is connected.
info = i2c_board_info object for each device.
In our example, the device is registered as follows.
For device 1:

Writing the I2C driver
As mentioned earlier, generally, the device files are present in the arch/xyz_arch/boards folder and similarly, the driver files reside in their respective driver folders. For example, typically, all the RTC drivers reside in the drivers/rtc folder and all the keyboard drivers reside in the drivers/input/keyboard folder.
Writing the I2C driver involves specifying the details of the struct i2c_driver. The following are the required fields for struct i2c_driver that need to be filled:
driver.name = name of the driver that will be used to match the driver with the device.
driver.owner = owner of the module. This is generally the THIS_MODULE macro.
probe = the probe routine for the driver, which will be called when any I2C devices name in the system matches with this drivers name.

Note: Its not just the names of the device and driver that are used to match the two. There are other methods to match them such as id_table but, for now, lets consider their names as the main parameter for matching. To understand the way in which the ID table is used, refer to the Linux source code.

For our example of the EEPROM driver, the driver file will reside in the drivers/misc/eeprom folder and we will give it a nameeeprom_xyz.c. The struct i2c_driver will be written as follows:

For our example of an adc driver, the driver file will reside in the drivers/iio/adc folder, which we will name as adc_xyz.c, and the struct i2c_driver will be written as follows:

The struct i2c_driver now has to be registered with the I2C subsystem. This is done in the module_init routine using the following API:

where drv is the i2c_driver structure written for the device.
For our example of an EEPROM system, the driver will be registered as:

and the adc driver will be registered as:

After the probe routine is called and all the required configuration is done, the device is active and the user space can read and write the device using system calls. For a very clear understanding of how to write i2c_driver, refer to the drivers present in the Linux source codefor example, the RTC driver on i2c bus, the drivers/rtc/rtc-ds1307.c file and other driver files.
For reading and writing data on the I2C bus, use the following API.

Reading bytes from the I2C bus:

client: i2c_client object received from driver probe routine.
command: the command that is to be transferred on the bus.

Reading words from the I2C bus:

client: i2c_client object received from driver probe routine.
command: the command that is to be transferred on the bus.

Writing bytes on an I2C bus:

client: i2c_client object received from driver probe routine.
command: the command that is to be transferred on the bus.
data: the data that is to be written to the device.

Writing words on an I2C bus:

client: i2c_client object received from driver probe routine.
command: the command that is to be transferred on the bus.
data: the data that is to be written to the device
When the read or write command is issued, the request is completed using the adapters algorithm, which has the routines to read and write on the bus.