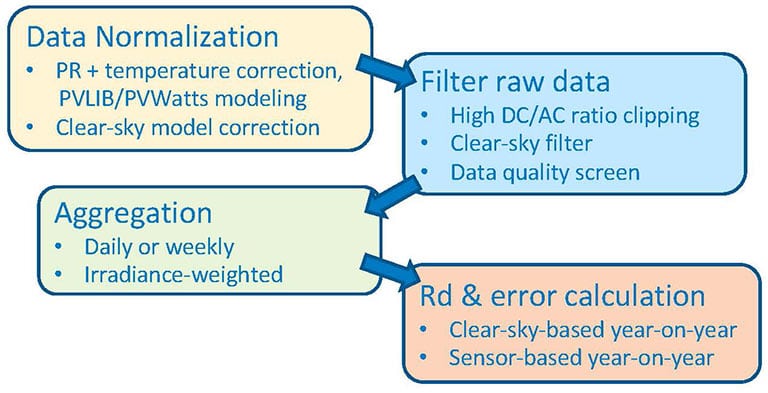 To improve the accuracy and reliability of PV plant performance data, the US National Renewable Energy Laboratory (NREL) has launched a new software package. Developed alongside SunPower and kWh Analytics, it will improve the industry’s understanding of degradation.

The software, Rd Tools, is open source and available to the public via GitHub. The package aims to solve issues with the number of variables potentially affecting performance, giving a more accurate picture of system performance degradation over time.

“The RdTools method was used to analyze energy generation from 264 PV systems at locations across the globe, revealing that degradation rates were slower than expected,” said Greg Kimball, a senior performance engineer at US module manufacturer SunPower, which co-developed the tool with NREL. “The result prompted improvements to and extension of our warranty coverage to customers.”

The RdTools can deliver valuable insights for manufacturers, engineers, investors and owners who have a stake in system performance, such as identifying under-performing sub-arrays, and quantifying system performance relative to neighbouring systems.

It’s unique feature includes its ability to switch between ‘sensor based’, which calculates system performance based on site-measured parameters, and ‘clear sky’, which uses modelled data. It also utilises a year-on-year method to calculate degradation, which NREL says reduces potential bias from seasonal effects such as shading, soiling and temperature, as well as missing or partial data sets.

According to NREL, this software provides user-friendly, accurate, and objective assessments that can help owners make sense of their data. Now PV stakeholders can learn much more about the performance of their technology and improve decision-making on multiple fronts.    Read more…