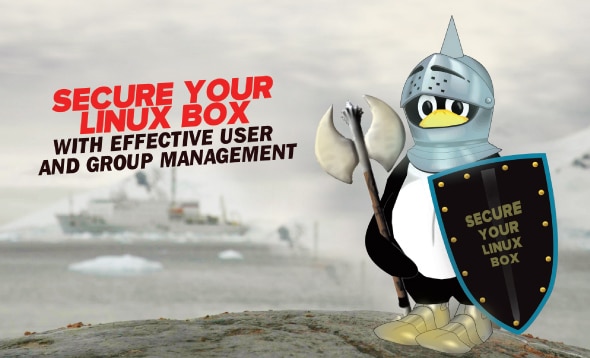 Security is a paramount concern today with identity theft becoming an everyday occurrence. Linux security is built around privileges given to users and groups. This article introduces the reader to the basics of user and group management in Linux

Linux is basically a kernel on which various distributions of operating systems have been developed, namely Red Hat, Fedora, Ubuntu, SUSE, etc. Since its inception, Linux has become the most dominant technology used to manage servers worldwide. In recent years, its popularity has extended to normal users also, rather than just being the administrators preferred choice. No doubt, one of the compelling attractions of Linux is that it is open source but another reason for choosing Linux for middle to high-end machines is that Linux is safe and secure.

A common myth is that Linux is built up on only plain text files, and that it is 100 per cent virus-free. However, this is not the truth. Hackers and crackers have always tried to inject threats into the Linux environment, and initially, they were successful to a certain extent. The reason for Linuxs security is that all its processes run strictly under the privileges allocated to various users by the systems administrator. Privileges, if implemented fairly well, make an unbreakable security layer around the Linux engine and prevent it from being attacked. In Linux, users and group members access a file systems contents (files and directories) based on the privileges assigned to them in the form of permissions. This is further enhanced by Access Control Lists, Sticky Bits and Security Enhanced Linux (SELinux).

Users and groups
A user is a person who is authorised to use the Linux interface under privileges issued by the systems administrator. Every person gets a username and password as credentials, which are to be passed during the login process for receiving an interactive shell. When we add a new user, several details are automatically configured by Linux. However, these can be customised as we will see later. There are five kinds of users:

A group is a collection of users to whom common permissions are allocated for any content. There is only one user owner for any content but, when we need to allow multiple users to access or modify the content by working as shared owners of that content, group ownership comes into the picture.

There are two types of groups:

Tips: 1. Adding and managing users seems to be very simple in graphical mode, but for administrators it is recommended to use commands on the terminal.
2. One user can have only one primary group, which is called his private group. However, users can enjoy secondary membership of multiple groups. This means that a user can be a member of multiple groups but only through secondary group membership.

By default, a new group is created with the same name as the username and a /bin/bash shell is assigned. Also, the user gets a directory with this name inside /home and receives some predefined files from the /etc/skel directory for starting work.
A new group can be added as follows:

Information and configuration parameters of users and groups
Information about existing users is present in /etc/passwd and has the following format:

The various fields separated by : in this file are:

Password related information of the user is automatically managed in the /etc/shadow file. Here, passwords are saved in encrypted form.
Tips: Log in as the root user (the superuser with unlimited privileges) to access and manage these files.

Home directories of users exist under /home. The same can be checked by listing the contents of /home directory using command #ls /home. Directories of u1 and u2 will be displayed.
Information about existing groups is present in the /etc/group file and has the following format:

Let us have a look at the /etc/group file (Figure 2).
Here, no group is allotted as secondary to any user but soon we will see how to allocate secondary groups.
Group passwords are stored in the /etc/gshadow file.
Now the question is: where do the rules of default configurations reside? This is important for customisation.
The following files answer this question:
1. /etc/login.defs: Provides control over password aging, minimum-maximum allowable user IDs/group IDs, home directory creation and other settings.
2. /etc/default/useradd: Provides control over the home directory path, shell to be provided, kit-providing directory and other settings.
3. /etc/skel: This is the default directory acting as a start-up kit, which provides some pre-created files for new users.

It is always good to tweak the default configurations for several reasons. It provides better security since the default settings are known to almost every admin. It also creates a customised environment that suits your requirements. It even helps you to exhibit your advanced administration skills.
Let us customise the following default settings for any new user:

Next, create the /ghar and /etc/startkit directories with some files in startkit.
So, we have created a file named Welcome, which will be available in the home directory of all new users. Now, add a new user u3 and check its home directory under /ghar instead of /home.

We can see that u3 received the file named Welcome in the home directory automatically. Now, when we try to add more users, the effect of Min and Max user/group ids will not allow us to accomplish user/group creation. We cannot create more users since the maximum range of the UID has been reached, which can be verified in /etc/passwd.
Other alterations are also visible in /etc/passwd as per customisations.

We can also make changes in configurations for individual users during new user creation. The following are the options for useradd and usermod commands:

Let us add a new user called myuser with the user ID as 2014, the home directory as /myhome, the primary group as u1, secondary group as u2 and shell as ksh. Any of these options can be omitted, as required.

Tip: Manual UID and GID do not adhere to minimum and maximum ID rules.

Let us verify the user information in /etc/passwd.
Also, look at the /etc/group file to see the effect of secondary group membership of myuser with u2.
Tip: After customising the primary group through the command, a new group with the name of the user is not created.

Similarly, a group can also be configured with a specific ID during creation:

By default, every group should have a unique group ID, but a non-unique group ID can be forcibly shared among different group names using o as follows:

We can verify the result of above commands in /etc/group.

Now, verify /etc/passwd and /etc/group files.
To change the name of newgroup to ngroup, type:

To delete an existing user u2, type:

To delete an existing user u2 along with its home directory, type: