Open CASCADE Technology version 7.6.0 is a minor release, which includes more than 410 improvements and corrections over the previous minor release 7.5.0. Version 7.6.0 introduces new features of most OCCT modules and components.

In particular, the robustness of modelling algorithms was improved in addition to the numerous bug fixes. In terms of Visualisation, new interactive object AIS_LightSource for a light source was introduced. Also, the performance of rectangular selection and Compatibility with WebGL and OpenGL ES were improved. New Data Exchange features include reading of kinematics entities from STEP files and glTF import/export improvements. OCAF allows safe reading of independent OCAF documents in different threads and partial document loading. Draw Test Harness functionality has been extended with multi-touch viewer gestures on Windows platform support.
To continue making OCCT materials more user-friendly, some improvements affected Samples and Documentation including fixes for iOS sample building and highlighting for code snippets throughout the documentation. 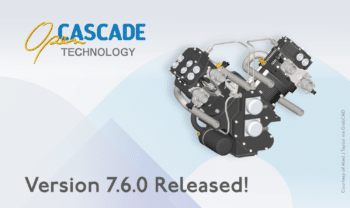 JetBrains Enables Remote Development in the Cloud in IntelliJ-based IDEs