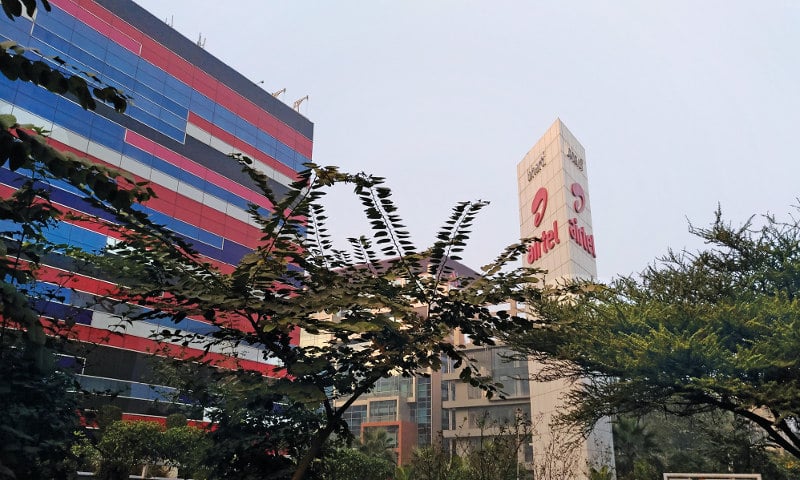 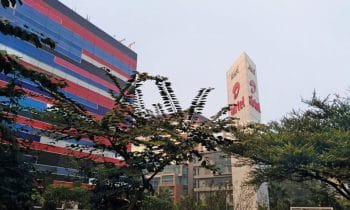 New Delhi-headquartered Bharti Airtel has over 257 million subscribers across the country, as per the recent data released by the Telecom Authority of India (TRAI). It is also one of the youngest firms to use open source software on a large scale.

Apart from being a market leader in the telecom world, Airtel is widely known for its broadband and DTH (direct-to-home) services. Though the group, founded by veteran entrepreneur Sunil Bharti Mittal, is not directly related to the IT industry, it has recently started contributing back to the community.

Airtel has deployed a large number of open source technologies to improve efficiency. These include solutions such as Redis, Nginx, Apache Tomcat, Drools, JBoss Wildfly and Spring. Besides this, the company’s vast user data is stored primarily on community-based offerings like AeroSpike
DB, MongoDB, OrientDB and PostgresDB.

“The telecom industry is all about technology and innovation. And today, more innovation is happening using open source technology than with proprietary software. This is a testament to all the committers and contributors around the world who have helped completely change this landscape,” Mehta told Open Source For You in an exclusive interaction.

“Open source lets us take control in order to make our own decisions smoothly, along with contributing back to the community. It enables us to be more lean, agile and secure and, hence, move faster in the competitive world,” says Kumar.

The main challenge that Kumar and his team faced while switching to open source was to bridge the knowledge gap. Airtel preferred reskilling the existing team and hired fresh talent only to make the transition smoother.

“Having the right team is very important. The engineering team does look for new co-workers who enjoy doing their work and are curious to discover the given solutions. At times, we ask them to code during interviews just to see how they think,” Kumar says.

Kumar adds that his engineering crew picks solutions that are tried and tested by various large- and small-scale organisations, have a large community base, elaborate documentation and are available without any restrictive or expensive licensing terms and conditions. Moreover, the team follows the agile development methodology and believes in prototyping technologies before their final deployment.

“Following agile development methodology helped us,” says Kumar, adding, “With rapid prototyping, we can judge the fitness of a technology for an application.”

Airtel has as many as six major projects based on open source solutions. There is the Mitra app for retailers to acquire new customers and reverse wrongly made recharges; the Fibre Force app to help NMT engineers measure a patroller’s performance; the Decision Tree app for call centre employees; the Hive social network app and the Project Leap open network initiative. Also, the telecom giant has recently developed its eCAF (electronic customer acquisition form) to digitise customer acquisition using Aadhaar biometric data.

The development of eCAF was aimed at offering instant activation of mobile connections and to enable paperless processes for account activation. “We were getting almost 300,000 acquisitions a day through the traditional paper-based process pan-India. But with our innovative eCAF, we are now getting almost 200,000 acquisitions in a day with just 10 per cent of our total retailers on-board,” Kumar reveals.

Likewise, the building of the Decision Tree app for optimising its call centre agents helped Airtel in reducing average call handling time. “The algorithm of the Decision Tree engine diagnoses the customer’s problem in real-time and provides insight to the agent on how to resolve it. The agent does not have to toggle between screens and multiple back-end applications, or check customer history and usage records to solve the query,” explains Kumar.

Decision Tree increased agent efficiency and reduced average handling time for calls by almost 50 per cent. These benefits also directly resulted in some unexpected cost savings for the telco.

Airtel has deployed MongoDB, Redis and Drools to enable Decision Tree for its agents.

Going forward, the engineering team at Airtel is also in the process of integrating its open source-backed eCAF solution within its payment bank. Kumar says that this move will help the masses open a bank account with

Airtel instantly and support the ongoing digital payment movement in the country. 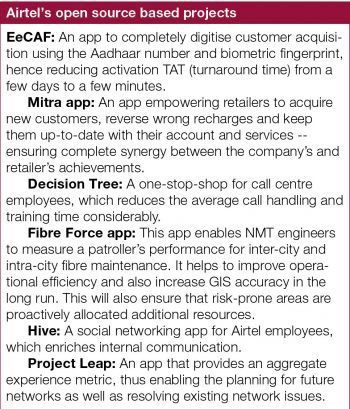 Community support to enhance developments
Airtel is using open source communities to improve its existing models and find ways to develop some innovations. “A great community can help to solve issues and provide a resolution to a problem,” Kumar states.

Contributing back through strategic partnerships

In addition to leveraging community support, Airtel is contributing back to the open source world through some strategic partnerships with startups and enterprises that are building new open source based solutions. “We do not want to limit ourselves to the proprietary world at all, and would like to fully embrace open source; we are now even starting to contribute back,” Mehta proclaims.

California-based Aerospike is among the enterprises that has so far received support from Airtel. The startup offers a Flash-optimised in-memory open source NoSQL database that operates in three distinct layers — a Flash-optimised data layer, a self-managed distribution layer and a cluster-aware client layer.

Kumar told Open Source For You that his team used skills from Aerospike to address some issues in the telecom space. “Aerospike has open sourced its product for the developer community. We have involved the firm to help us crack complex problems in some of the core telco-domain applications,” he says.

“Wherever we find that our application requirements are not being met by a licensed product, we go for open source,” states Kumar.

The team mainly contemplates open source solutions rather than proprietary technologies because of the former’s stability, available documentation and ease of implementation.

“We are really happy with the choices that we have made,” Mehta affirms.