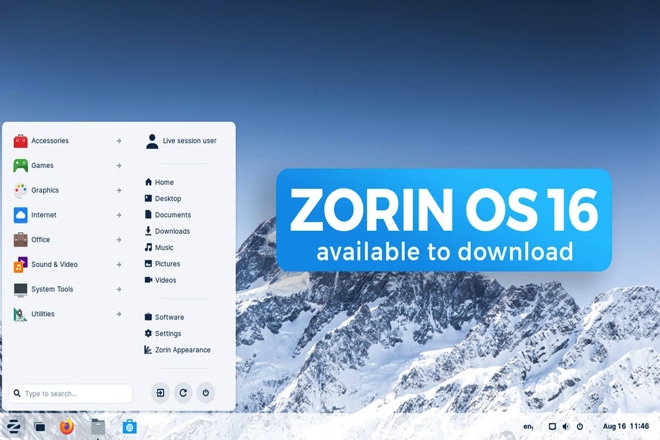 The most anticipated Linux distro Zorin OS 16, based on Ubuntu 20.04.3 LTS has been released with new “Pro” edition. The Zorin OS “core” is free with all essentials. The new distro comes with many key updates.

The base edition has an upgraded user interface, revamped default theme with animations, while the pro version comes with new wallpapers and layouts. One of new key updates is the Jelly Mode. On enabling, the windows wobble when moved around the desktop and squeeze in to their app icons when minimised.

As the Zorin OS supported snap out of the box with its Software centre, the OS 16 has Flathub enabled by default. The new version comes with revamped welcome screen and new touchpad gestures, sound record app and other performance improvements. The new desktop layout in Zorin Appearance that resembles the default interface in Windows 11. It features a modern and streamlined UI that adapts well to computers with touchpads, mice, or touchscreens. The new grid menu, activities overview button, and taskbar icons are placed front and center for easy access and navigation on screens of all sizes. The Windows 11-like desktop layout is available as an option in Zorin OS 16 Pro.

Zorin OS 16 uses a database of Windows software to detect .exe file if downloaded, which is a useful support for beginners to guide on installing software on Linux. Though it does not have exact instructions, it prompts to install ‘Windows App Support’. It comes with a new photo management app with options to crop, add filters and enhance the image.
With Zorin OS 16, the user can customise taskbar and dash with wide range of options.

It is currently available on Zorin’s website. The company said other editions of Zorin OS 16 – Lite and Education will be released over the coming months.