Home Audience For U & Me The Open Source Wars 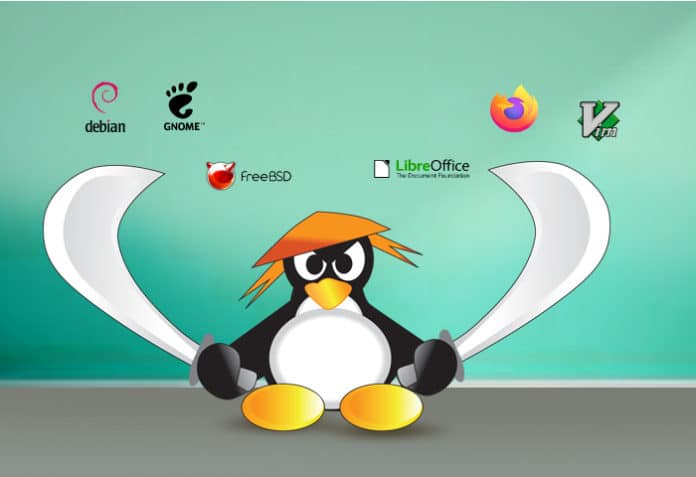 This article looks at how differences of opinions between developers and users of open source software have led to competitive battles, with some software emerging victorious and dominating over others.

Humans have a strong sense of individuality. This leads to a variety of viewpoints, even on seemingly insignificant issues. The world of computing is no better in this respect. Let me clarify the matter with a simple example. While writing a program in C, C++ or Java, where would you place the curly bracket? Many professional programmers follow one of the two styles in the code given below:

Then again, while writing a program, which of the following would you choose as the name of a variable to store the number of students in a class — numberOfStudents (Camel case), NumberOfStudents (Pascal case) or number_of_students (Snake case)? This is yet another trivial but hotly debated matter as far as source code indentation is concerned.

These and other technical/aesthetic choices while writing programs lead to the creation of different indentation styles for source code. Some of the popular indentation styles followed by programmers include the K&R style, GNU style, Allman style, Whitesmiths style, etc.

Now let us move on to more serious stuff. Is there any such infighting going on in the open source world? Unfortunately, the answer is ‘Yes’. But does it affect open source software adoption negatively? Again, the answer is ‘Yes’. It is a well-known fact that Linux or its variants like Android dominate the operating systems used in smartphones, workstations, mainframes, supercomputers, etc. However, in the personal computing space, Linux has a market share of less than 10 per cent. If Android is the most dominant among smartphone operating systems, then why can’t Linux be the dominant among PC operating systems? Linux is efficient and easy to use but it doesn’t dominate the PC industry. People usually opt for laptops bundled with the Windows operating system because the usage is pretty straightforward (whether the operating system is the best choice or not is a different question). Linux requires the user to make many choices like the flavour of Linux to install — Fedora or Ubuntu or any of the other numerous flavours available. You also need to decide whether you want a GNOME or KDE system. This might prove daunting to a non-technical person.

Introductions aside, what do I mean by ‘open source wars’? Well, I use the term to denote the competition between different open source software for dominance. To be frank, to neutral observers, these debates and the competition often look unnecessary. The important question is: are these debates over the adoption of some particular software as intense as I portray them to be? Well, the term ‘UNIX wars’ was coined in the 1980s to denote the feud between different UNIX standards to become the dominant one. This shows that the mutual animosity between the fans of certain related yet competing software is far more serious and profound than expected. Fortunately, for all of us, these wars are almost always fought on the Internet. In this article, we will discuss some of the key battles fought in the open source world regarding the adoption of particular software. But jokes apart, this article will also tell us how even the silliest disputes among the members of a development team can lead to conflicts and derail the pace of software development and technology adoption.

UNIX wars
This is the oldest of all the wars in the open source world. The initial hostility was between AT&T UNIX and BSD UNIX. Though UNIX was developed by AT&T (or should I say Ken Thompson and Dennis Ritchie) in the late 1960s, University of California, Berkeley contributed a lot too, and this led to the creation of BSD (Berkeley Software Distribution) UNIX. Due to technical as well as commercial reasons, AT&T UNIX and BSD UNIX parted ways in the early 1980s. This marked the beginning of intense competition between these two factions to become the de facto standard of UNIX. This competition, known as the UNIX wars, continued well into the 1990s. But today this war is over with a clear winner (even though it was a late entrant) — Linux. Linux is a UNIX-like operating system and as of today the most dominant open source operating system.

It is good to know that licensing issues and UNIX wars were one of the reasons behind the creation of Linux. But, before we move on, what happened to BSD UNIX and AT&T UNIX? Well, they are not extinct. If you want to have a feel of BSD UNIX, try FreeBSD, an open source implementation of BSD UNIX. I consider FreeBSD as a runner-up in the UNIX wars, as it is open source and the most popular among different BSD UNIX derivatives. If you want to have a feel of AT&T UNIX, you could use Oracle Solaris, HP-UX, or IBM AIX. But remember, these are all proprietary operating systems. Thus the first open source war ended with a number of proprietary operating systems and Linux emerging as winner.

The distro wars
Now that Linux has emerged as the clear winner, let us discuss the distro wars. Earlier I believed that the number of Linux distros was in the hundreds, but now I suspect that it might be in the thousands. Though so many Linux distributions are competing for dominance, most of them are either Debian based or Red Hat based. This reduces our choices by a large margin. The other major independent distributions of Linux are Arch Linux, Gentoo Linux, openSUSE, and Slackware. Not unlike the UNIX wars, this is an ongoing war with no clear winner. It is safe to predict that the competition for the most popular Linux distro will continue for a long time. But who is leading the competition as of now?

Editor wars
Unlike many of the previous rivalries, which were often motivated by commercial reasons, this is a war fought mainly for technical and philosophical reasons. The editor war is also a fiercely ongoing war for becoming the most popular open source text editor. Some of the popular open source text editors include Emacs, Vi, Atom, gedit, KWrite, GNU nano, etc. But the editor war started in the mid-1980s is mainly fought between the supporters of Emacs and Vi. Notice that, nowadays the Vi editor is replaced with the similar yet more powerful Vim editor. The mutual criticism of Emacs and Vim has led to the creation of a lot of jokes. For example, the extensible Vi layer for Emacs (which provides some Vi features in Emacs) is called the ‘Evil mode’, whereas the supporters of Vim tease the complexity of Emacs by calling it “a great operating system, lacking only a decent editor.” In my (biased) opinion, Emacs is like a Swiss army knife – it has so many functionalities that you don’t use most of them. Vim is like a machete – just a single lethal blade. Again, my opinion is biased as I prefer Vim, and the one time I used Emacs was to use the org-mode. Soon, I felt that Emacs is too powerful and taxing my poor brain too much. In short, Emacs is complex but powerful, whereas Vim is simple and faster.

Now, let us try to identify the faction having an advantage in the editor war. Results from the Stack Overflow annual developer surveys are a good indicator of the popularity of a tool. The annual surveys from 2016 to 2019 featured a question about popular development environments. Vim was preferred by about 25 per cent of the respondents in these surveys, whereas less than 5 per cent of the respondents preferred Emacs. This seems like a clear lead. Thus, currently, the future of Vim looks more promising.

Apache OpenOffice vs LibreOffice
If you have decided the Linux distro, the desktop environment, and the text editor for installation in your system, we can move on to the next essential software required, an office suite. Office suites typically include a word processor, spreadsheet program, presentation program, etc. From 2001 to 2011, OpenOffice.org was the most popular open source office suite, and was supported by Sun Microsystems. When the latter was acquired by Oracle Corporation in 2010, many of the contributors to the OpenOffice.org project felt that a fork was necessary.

Browser wars
The World Wide Web became very popular by the mid-1990s. The first browser war was between Internet Explorer and Netscape Navigator for dominance. In my opinion, this war ended in a catastrophe as both Netscape Navigator and Internet Explorer failed. Netscape Navigator had its final release in 2008 and Internet Explorer will be discontinued from 2022 onwards. But the browser wars are not over yet. The second browser war is hotting up and is mainly being fought between Chrome, Safari, Edge, and Firefox. Though this is an ongoing war, the current strong contender is Chrome. According to the latest stats by StatCounter (a popular Web traffic analysis website), Chrome has over 60 per cent market share among Web browsers. Safari and Edge are trailing far behind Chrome, and are placed in the second and third positions, respectively. Notice that none of these Web browsers are fully open source. The truly open source Web browser Firefox is placed at the fourth position.

From the above discussion, it can be inferred that frequent forks and competition often negatively affect the adoption of open source software and add to the confusion of a non-technical person planning to switch to Linux. Before concluding, I would like to point out that I mostly use Fedora, KDE Plasma, Vim, LibreOffice, Chrome, etc, and my opinion might be biased. But the point I want to emphasise is that the support for a particular software by the community is often very intense and switching of sides is rare. So if you haven’t yet made a decision about the software you want to use, I think this might be a good time to do it. I believe you will be taken more seriously in the world of computing if you are an Ubuntu/GNOME/Vim/LibreOffice/Firefox sort of person than if you are a person indifferent to the software you work with.