Disclaimer: This is undoubtedly one of the best puzzle games I have ever played. So, expect my review to be a bit fanboy-ish.

It has been scientifically proven that breaks at regular intervals increase productivity and there could be no better game (other than Desktop Towers Defense) other than Pingus to fit into that bracket. What more, Pingus is so addictive that it definitely manages to keep you rooted to your seat, scenario after scenario.

This game is basically an adaptation from the hugely popular Lemmings game, that is, combining various skill sets to attain a certain goal. For those of you who don’t really know what the lemmings-like game genre is, I’ll give a short description, so that when you start playing the game, you will have a general idea of what you have to do. Basically, you have a specific number of penguins from which you have to save some in order to pass the mission. Penguins start showing up in a certain point of the map, and you have to carefully guide them until they reach the exit. For that, every particular mission has certain abilities that you can equip the penguins with, in order to pass over obstacles that stand the way. For instance, you may sometimes need to equip your penguins with floaters (little propellers mounted on their head), so that when they reach a gap, they gently land on the ground, and not hit it at great speed and die. You can also make the penguins jump over gaps to reach a specific point, or better, build a bridge over the gap and never have to worry about making sure every penguin jumps over. 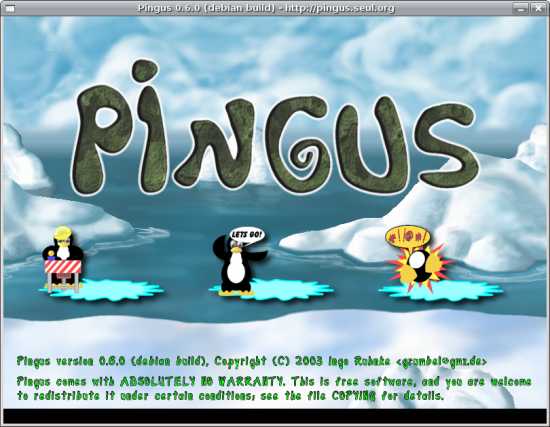 Other situations, like when the exit is lower than the area where the penguins are generated and there’s no way to jump or land with a floater, only leave the possibility of digging. Digging is more special in Pingus, as there are practically four kinds of possibilities of doing it. The first is pretty straightforward, simply called digger, transforming a penguin into a cute, very well equipped drill worker that makes a vertical hole from the point where it is standing until there’s no soil left to go through, or it reaches a piece of steel. Another possibility is the miner ability, very similar to the digger, but with a difference in terms of direction, as the miner creates not a vertical pathway, but one situated on a 45-degree angle relative to the vertical axis. 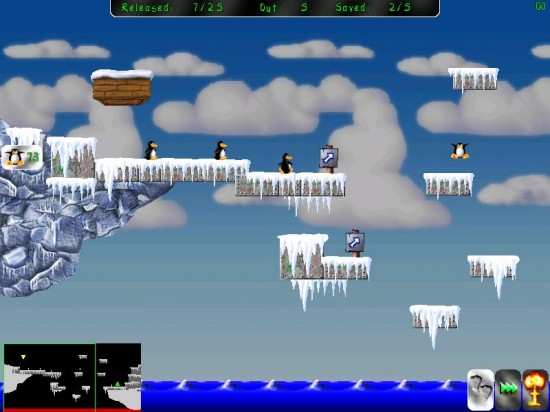 The basher is the third ability to allow the creation of tunnels in the ground for the penguin to pass through. Just in case you haven’t guessed it already, it allows the penguin to dig the tunnel horizontally, starting from the point where it is at when you equip it with this ability, and ending either on the other side, with the penguin safe and sound, or stopping when reaching steel. The forth and final way of clearing obstacles is also the hardest to master, because it differs fundamentally from the first three. The name is bomber, and it pretty much says all about its purpose; when you select the bomber ability and equip a penguin with it, it doesn’t explode right away, but instead a timer is triggered and, when it runs out, boom! This is an explicit sacrifice ability, as there is no way to save the penguin after you make it a bomber. You might think of it as cruel but, trust me, there are cases when there is no other way to complete the mission than by using one or several bombers.

There are other abilities as well, but I’d like to let you discover them and try to use their functionality in an efficient manner. However, there is one last comment I want to make on them. Every time you don’t know how to resolve a given scenario, try to think of how you could integrate all the available abilities because, most often than not, the key ability is not the most obvious one.

The only part about the game that I hated was that it had too few levels (just 8 halloween maps).

The graphics of Pingus is satisfying but, given that it’s a 2D game designed more for thinking than for being pleasing on the eye, it can be deemed quite good. The entertaining aspect here comes not from superb landscapes or appealing effects, but from the contentment you feel when you finish a mission. So much so, the animation rendered to the penguins when they are enabled certain abilities are also quite cute. I shall always vote for the ‘basher’ animation.