Colaboratory is a free research project by Google created to help disseminate machine learning education and research. It’s a Jupyter notebook environment that requires no setup and runs entirely on the cloud. Colaboratory can be live synced with Google Drive, and can be shared just as you share Google docs or sheets.

To work with today’s high performance and supercomputing applications associated with Big Data and deep learning, there is a need to integrate specialised hardware that can process the data sets with greater speed and accuracy. So there is a need to integrate Graphics Processing Units (GPUs) that can perform parallel computations to provide the maximum speed. In traditional Central Processing Units (CPUs) there are multiple cores that can process the computations. GPU computing integrates these hundreds of cores with the GPU as the co-processor to accelerate the CPU speed for engineering and scientific computations.

The concept of GPUs for system acceleration was first promoted by NVIDIA in 1999, with the GeForce 256 as the first GPU. NVIDIA GPUs have paved the way forward for the industry, and will provide a 1000X increase in computing speed by 2025.

The global market size of GPUs is increasing rapidly. A report by Global Market Insights estimates the market size of GPU as a Service as over US$ 200 million in 2016. The report predicts that the compound annual growth rate (CAGR) of the GPU market will exceed 30 per cent till 2024.

Traditionally, GPU installation has been a costly affair. In addition, the computer needs to have a GPU card slot. To negate the GPU cost factor, there are many cloud based services that provide GPUs on the cloud. The services of remote computers that have GPUs can be hired without purchasing the GPU and installing it in the local system.

Table 1 gives a list of a few prominent cloud services that can be used for deep learning and Big Data based implementations, depending upon the usage. Many of these cloud service providers offer integration with the GPU so that high performance scientific computations can be carried out. Remote virtual servers are provided with the attached GPU for deep learning, machine learning and Big Data analytics. 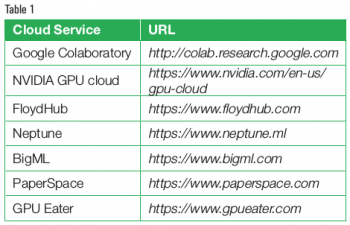 Using cloud based services, TensorFlow, Keras, Caffe, PyTorch and other Python based code can be implemented for deep learning and machine learning.

Google Colaboratory provides the Tesla GPU based ‘free cloud’ for deep learning and scientific computations. The code for Keras, Tensorflow and PyTorch can be directly implemented on the free Tesla K80 GPU. The cloud service provides 4992 CUDA cores and a memory bandwidth of 480GB/sec (240GB/sec per GPU).

If the program source code is to be executed using GPU based computing, it must first be activated in Jupyter. In the ‘Edit’ menu, the option ‘Notebook Settings’ activates the GPU as a hardware accelerator. Once this option is selected, the code is executed using the GPU and generates the results with enormous speed.

Instructions that can be directly executed on the Jupyter notebooks in Google Colaboratory are given below.

To display the GPU name and the count, give the following instructions:

To display the number of sockets and available slots for physical processors, give the following command:

To view the number of cores in each processor for scientific and engineering computations, issue the following instruction:

To display the number of threads in each core for parallel computations, give the following commands:

To view the memory available, give this instruction:

To view the hard disk available for use, give this command:

The overall details that are displayed are:

It should be noted that in Google Colaboratory, the disk, RAM, VRAM, CPU cache, etc, and all other data on our allotted virtual machine will be erased after every 12 hours. This means that the access is temporary.

The Big Data files can be uploaded on Google Colaboratory in ZIP or RAR compression formats. To uncompress the files, the related tool can be installed dynamically on Colaboratory.

To upload files dynamically, use the following commands:

On execution, the window for selecting the file from the local hard disk will open and the files will be uploaded to the cloud.

For installation of p7zip to extract the compressed files, give these commands:

To extract the compressed files using p7zip, give the following command:

To remove the file from the server and to list the existing files, type:

Within the panel of Google Colaboratory, there are a number of examples and live scenarios that can be executed in real-time. For example, the URL https://colab.research.google.com/notebooks/gpu.ipynb presents the output from a GPU based computation of deep learning. In this implementation, the speed of the GPU is 45 times that of a traditional CPU. Other scenarios and examples can be explored in a similar way.

Installation of PyTorch on Google Colaboratory

PyTorch is one of the powerful and widely used libraries for deep learning written in Python. It can be installed on Google Colaboratory with the execution of the following instructions on the Jupyter notebook:

Implementations that need large resources such as biometric applications, signal processing and Big Data visualisation can also be processed in the Google Colaboratory with better speed and performance.