Home Content Case Studies Rich Spatial Data Acts as a Backbone for this Lake Management and...

Gowtham Gollapalli, founder, Kaiinos Geospatial Technologies, in an exclusive interaction with Sreejani Bhattacharyya and Niraj Sahay of Open Source For You, talks about how the company developed its flagship lake management and monitoring system, its applications and how it will benefit the state of Telangana.

Monitoring water availability is crucial in India as it can help to address climatic and environmental challenges. Information on water bodies can help to understand the temporal changes taking place in the environment and the climate, and to get a glimpse of the potential drivers of such changes.

The development of the lake management and monitoring system (LMMS)
Gowtham Gollapalli, founder of Kaiinos Geospatial Technologies, the company that has developed a lake management and monitoring system for the state of Telangana, says, “Mapping and conservation of water bodies is an important task for citizen groups and the government. So, we started this journey with a citizen group (SOUL or Save Our Urban Lakes) in Hyderabad to map all the water bodies that are present there. During those interactions we met government officials, and they were interested to map the water bodies of the entire state.”

So Kaiinos Geospatial Technologies, along with IIIT-Hyderabad and the government of Telangana, began work on an open source lake management and monitoring system (LMMS) that would map and monitor the changes in the water bodies in Hyderabad over a period of time, using satellite data and location based apps on the Web and mobile.

Mission Kakatiya is an initiative by the Telangana state government to restore minor irrigation sources of the region. As almost 85 per cent of the cultivated area in Telangana is rain fed, lakes are very crucial for sustaining agriculture in the region. The government is restoring all the lakes in the state for sustainable overall development in a phased manner.

As per a technical document released by the Telangana government, “The project aims to use the rich satellite data sets and derived data sets provided by the Indian Space Research Organization (ISRO) for improving the efficiency in planning, monitoring and implementing Mission Kakatiya. Rich spatial data acts as a backbone for the proposed lake information system.”

A three-pronged approach is used to extract the spatial data, by using the multispectral satellite data provided by NASA and ISRO, and analysing the natural water sinks extracted from a combination of satellite data, contour data and digital elevation models.

The information extracted from digital/vector formats of the toposheets of Survey of India is also utilised for creating highly accurate and location-specific information about the lakes. The officials of the irrigation department are provided with a user interface to harvest the information so that they can plan, monitor and implement lake regeneration with ease and efficiency.

What is the need for mapping water bodies?
Gollapalli says that mapping of water bodies is needed to understand the alterations that have taken place over a period of time due to demographic or climatic changes. Experts can then get to know the impact of these changes on agriculture and drinking water, and find out the areas that are under water stress (urban or rural). 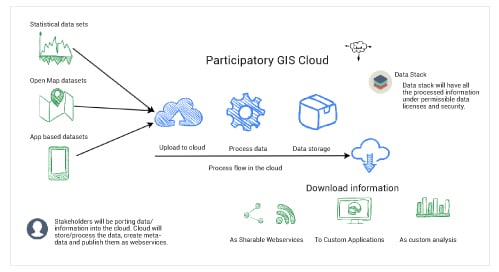 The architecture and the way it works
The architecture of LMMS is designed to adhere to the standards specified by the Open Geospatial Consortium’s (OGC) Open Web-service Standard (OWS). As per OWS, once a platform-independent data model has been developed, the designs of the information model, the processing model and user interface model have to be taken up. These feed in modelling management services, processing services and human interaction services, respectively. This helps in building and deploying service interfaces for all the workflows of the user groups.

Landsat satellite data owned by NASA is in the open domain. Any registered user of the Earthexplorer website can download this data, which has two shortwave infrared bands along with one near infrared band. Water absorbs radiation and so the infrared spectrum is useful in distinguishing water from land. But in the shadow regions of forest areas there could be higher transpiration and thus there may also be heat-sinks that mimic water behaviour. To avoid this behaviour in computing NDWI (normalised difference water index) the team uses an infrared component, which is a composition of all the three infrared bands of landsat data. After downloading the landsat images, the optimised NDWI is calculated using the following formula.

After the data on waterbodies is extracted, it is stored in a central database by giving a unique ID generated based on the location of these bodies. Before going to the field, engineers/citizens/conservationists can navigate online to the area they are planning to visit using the interface provided. The water tanks in that area are shown in their mobile phones. Details of rejuvenation activities taken up on the tanks can be captured through the app and uploaded to the central database. Spatial temporal correlation can be done on the data sets to assess the impact of the rejuvenation activities taken up. This framework thus helps to identify water bodies, assess their current state, take up rejuvenation, and monitor the progress of these activities with the help of both satellite data and field data.

Challenges
Gollapalli says that developing this system came with its share of challenges. The first challenge was to apply algorithms and build a case study to show the changes in water bodies and the stress on them. Getting funding to develop this kind of a system was also a challenge. After receiving government funding to develop this platform, the team is looking at a crowdsourced model to sustain it.

He adds, “Another issue was to make stakeholders understand that spatial data will be useful for planning statewide conservation activities. We worked with citizen groups to increase awareness, and by creating case studies we convinced the government to take it up on a large scale. Now we are trying to create a platform where people can learn and contribute. Here our challenge is to reach out to people. Before the onset of the pandemic we were conducting physical workshops with teams of researchers and conservationists, but now we are trying to build virtual platforms where people can participate in generating and using data. We are looking for investments in developing this platform.”

Is LMMS totally open source?
The system has been built using open source tools. It is a customised application built using Java openlayers. The algorithms part of the project is open source. The mobile app component is also open source. The rest of the solution is specific to users or local geographic conditions. The team is working on building a generic model and bringing it into the open source domain.

Why open source?
Gollapalli feels that the team chose open source technologies as these help to build customised solutions. It is a multi-disciplinary project that requires the synchronisation of various aspects, and open source is best suited for that.

Who benefits from all this
The main beneficiaries of mapping surface water bodies seasonally will be people living in areas prone to climate changes. Gollapalli says, “We are yet to reach a stage where the data that we are generating is directly useful for them. We are using a three-pronged approach in getting this to the grassroots level. We are working with NGOs and helping them understand the utility of open data and open source for water conservation. We are also working with the state government to create data platforms for analysis and planning, and enabling researchers to use satellite data, process it and contribute to open data.”

Dr K.S. Rajan, professor at IIIT Hyderabad and mentor to the team, adds, “There are three parts to the project—understanding the problem and designing a solution, executing the solutions that can be made operational, and training the staff (who can not only use the solution, but also maintain it and put it in practice on a day-to-day basis). My role consisted of helping to design the solution – looking at what data was available – and working out the correct technical applications. Once that was done, we started building a prototype. And then we trained the right people in a government agency to involve them in the working of the solution.”

Future plans
So, what is the roadmap for this project? Gollapalli says, “After providing support to the government for three years and handing the project over to them, we plan to map and monitor all the surface water bodies in the Deccan plateau by collaborating with academic institutions and citizen groups.

“We have started an e-learning platform called SEED to help young researchers learn how to map changes in land resources by using satellite data. This platform will be part of a participatory GIS model that helps users to learn and contribute to open data. This will enable availability of data for all regions and all seasons.”