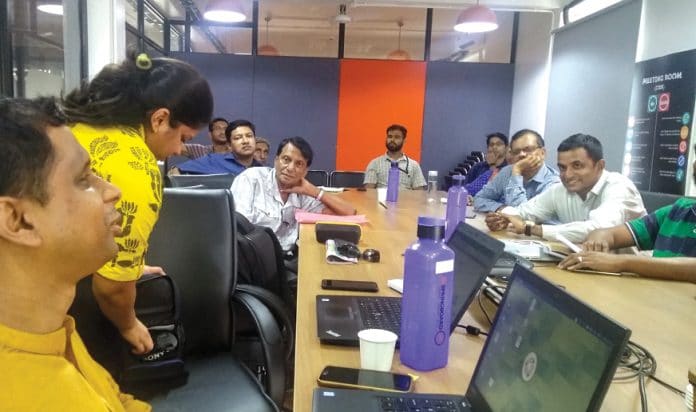 This article turns the spotlight on an inspiring FOSS project developed in India. GNUKhata is an accounting application that holds its own against popular proprietary variants, and can also be used by the visually impaired. The driving force behind the project is a visionary who lost his sight himself.

Krishnakant Mane, 37, needs quite a bit of help to navigate his way through Panaji, the small capital of Goa located along the banks of the Mandovi river. It is usually very easy to find your way there; if nothing else, the river guides you. But, as Mane told me later when we got a chance to speak, “I’m completely blind.”

When it comes to crafting software, however, Krishnakant, who is called just KK in FOSS circles, finds his way around with ease. He is, in fact, the father of GNUKhata, the made-for-India, open source “free and flexible software for accounting and inventory management.”

As he explains, digital freedom is fundamental to life. So the foundation he launched works on “bringing freedom of technology in education.” Besides “advocacy based on free software,” it takes up projects linked to rural digital empowerment, and ICT based infrastructure in the rural parts of India. All of this is based exclusively on using free and open source software. The foundation also actively participates in developing FOSS tools in the education, health and finance sectors. Check out more about it at http://dff.org.in/.

GNUKhata is one of the tools developed by KK’s foundation. Like some other fairly innovative Indian FOSS products, GNUKhata probably hasn’t been sufficiently noticed in the land it was born in. But it is making impressive progress now.

In Panaji, on a social visit recently, literally leading KK around the city was Prajkta Patkar, the project manager of GNUKhata software (both work together on the project with others). Not one to waste time, KK got in touch and offered to speak while on his trip. In a short while, their laptops were set up and they were ready to demo the fruits of their work.

Flawlessly, Patkar and KK got into explaining mode. Theirs was an audience of techies, FOSS enthusiasts, and accountants or businessmen. Each one had come with their own interests in mind, and they didn’t go home disappointed.

GNUKhata is growing steadily. As I was completing this write-up, it was announced that GNUKhata version 5.10 has been released (in mid-June 2018). Version 5 was itself a major release. This latest version has a redesigned user interface. “These changes will help you manage the business with great ease, even if you are a non-accountant,” a GNUKhata announcement that reached my mailbox stated. The helpdesk is at support.gnukhata.in and the mailing list is on freelists.org

Of late, the project has got support from the International Center for FOSS (ICFOSS). This is the Kerala government’s autonomous institution that has been set up to coordinate FOSS initiatives within Kerala. ICFOSS has also been tasked with linking up with initiatives in other parts of the globe “to push the agenda of promoting democratic access to information and knowledge through equitable modes of production and distribution of software and knowledge.” GNUKhata also gets support from the consultative firm Tech Blue Inc.

With the dedicated, hard work of the team and support from others, GNUKhata has grown a lot.

“From cash flow statements to profit and loss and balance sheets, GNUKhata can do it all,” says KK. This software helps you keep track of your inventory. You can create invoices, cash memos, delivery challans, purchase orders, rejection notes, debit and credit notes. And it’s the same for your bank reconciliation also.

KK explains: “We have a feature called Close Books. You actually close your books at the end of the financial year. All your profit and expense accounts are debited or credited to ‘Profit and Loss’. You get the ‘Profit and Loss’ balanced properly. The books are closed, and the accounts are locked. You also have an option called ‘Roll Over’, by which all the closing balances are carried over as opening balances to the next year. You can roll over without closing the books – to wait for your audits to be completed till you close your books.”

GNUKhata also allows users to read down from trial balance to ledger, and ledger to voucher. “Right now, the application is India focused. It was pretty focused on the international market earlier, but we worked so much on ensuring it is GST compliant, that we have to now work to get it internationally compliant as well,” says KK. For instance, one user in Nepal said that he liked the product, but the GST modules didn’t make any sense there. KK also concedes that work is needed to fix multiple currencies and other factors that will allow the software to get adopted worldwide.

The flip side is that it works nicely for those wanting GST support.

After being made GST-compliant, all documents including invoices and delivery notes are now created as per GST regulations. “Importantly, GNUKhata can import data from the widely used proprietary Tally-like software through exported spreadsheets from proprietary programs,” says KK. In reply to a query on how GNUKhata compares with GnuCash, he says, “You cannot compare them. GnuCash is basically a personal accounting system. You can use GNUKhata like GnuCash. But then, it’s like using a crane to lift a small brick.”

GnuCash is a personal, financial accounting software used by SMEs, licensed under the GNU/GPL and available for Linux, Windows, Mac OS X, BSD and Solaris. The project was begun in 1997 and written primarily in C, with a small fraction in Scheme, the programming language that follows a minimalist design philosophy.

“Maybe you could ask how GNUKhata ranks compared to Tally or QuickBooks. In which case, I would say, it compares favourably. Except for a few very complex reports, some of which QuickBooks has, and a couple of which Tally has (and these are not used by everyone, by the way)…barring those, I don’t think there’s any other issue that people have pointed out,” says KK.

And for retailers, the software can manage the point of sale. “GNUKhata is nothing but APIs,” KK explains.

Stock reports can be seen at the ‘godown level’. So if you have multiple godowns, you can check what the stock level in each of them is.

KK says he is always glad to interact with software professionals and those in the accounting space too. He jokes, “I now have enough knowledge to do at least a B.Com (in accounting).”

He credits Arun Kelkar, a chartered accountant with three-and-a-half-decades of experience, as being the chief domain expert.

GNUKhata, which is based on double-entry bookkeeping, comes in two forms—the Web based application which can run through a browser and a desktop based application. So far it has many happy users at places like the International Center for Free and Open Source Software (ICFOSS), Chinmaya University and some small and medium scale NGOs too. GNUKhata aims to grow into becoming a leading made-in-India and made-for-India accounting and inventory software. A lot of developments and improvements are currently in a very advanced stage of finalisation.

Today, the project’s site lists a dozen-and-a-half active contributors, with many more having been active in the past. GNUKhata can be freely accessed and downloaded from http://gnukhata.in.

FOSS and the visually challenged

“It’s wonderful. Wonderful!” KK says, when asked about the current state of FOSS that caters to the visually challenged in India. Being on both sides of the fence, he should know.

In fact, KK claims that now, the makers of proprietary software are copying a few things that FOSS software like Orca has been doing.

Orca is free and open source software, which features a flexible, extensible screen reader from the GNOME Project for the Blind. Using both speech synthesis and Braille, Orca helps provide the visually impaired with access to applications and toolkits that support the AT-SPI (such as the GNOME desktop, Mozilla Firefox and Thunderbird, OpenOffice.org/LibreOffice, GTK+, Qt and Java Swing/SWT applications).

There’s also a magnifier for people with low vision. Orca has a Braille-output, so those who are both hearing and visually challenged can use it to access their computers. It supports a lot of Indian languages, but KK feels the language output sounds quite ‘synthetic’ and could do with a better voice output.

KK does a lot of Python programming and Orca is also written in Python. This project started out in late 2006-07 and KK was one of the people involved with Orca. But then he shifted his attention to GNUKhata, around 2008.

KK has been a developer since 2002. He feels the only challenge in India is that people are not ready to work with visually impaired developers. Quite a few universities don’t accept the visually impaired to undertake programming tasks, he says.

To teach programming to someone who is visually challenged, one has to know how he or she navigates the computer, exclusively using the cursor. “We don’t use the mouse. So, instead of saying, “Just go there and click that,” you need to simply say, “Press the Up arrow thrice, the right arrow once, and then click Enter.” That is the terminology you have to use while encouraging the visually challenged to enter programming…”

KK has worked extensively on GNUKhata. “It’s my baby,” he says proudly. Another software he has worked on is called MANTRI. “When elections come, everyone wants statistical and demographical data of their area. Interns at SNDT University (the women’s university in Mumbai) were working on it. I liked it and thought it was a good graphical representation of the demographics. We called it MANTRI, for Managing and Editing Territorial Regional Information. It is written in Java.”

KK says that he himself is totally blind and can only sense light. His mother came down with measles during her pregnancy, which affected his retina, and he lost his eyesight. “But my vision remained,” he says with a broad smile.

GNUKhata currently gets installed on Ubuntu and Debian. An RPM version is planned, and the team is talking with creators of other brands/distros.

“However, Ubuntu being the most popular distro on the desktop side, we thought it would be better to have the GNUKhata installer for it,” says a project team member.