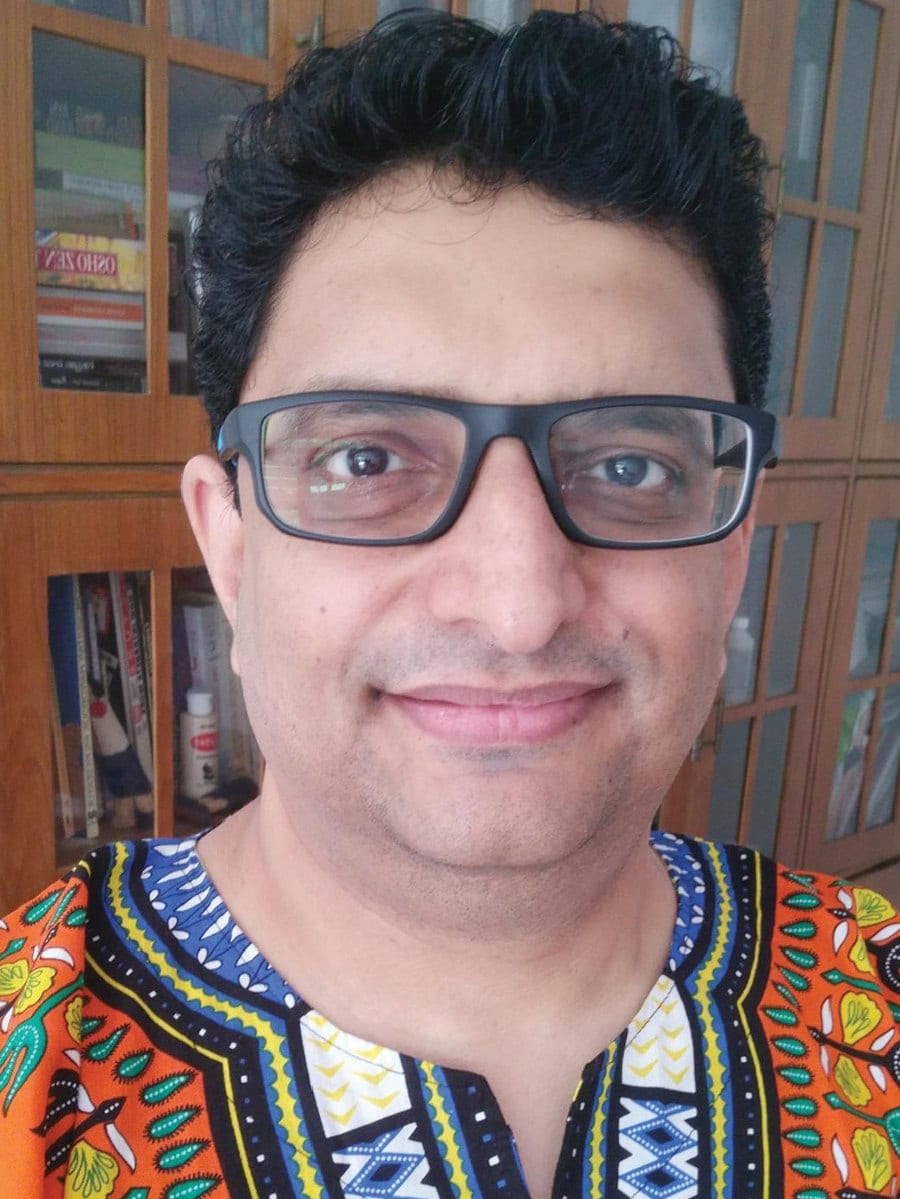 Wearing geeky eyewear, this dimple-chinned man looks content with his life. When asked about his sun sign, he mimes the sun with its rays, but does not reveal his zodiac sign. Yes, this is the creative and very witty Niyam Bhushan, who has kickstarted a revolution in UX design in India through the workshops conducted by his venture DesignRev.in. In a tete-a-tete with Syeda Beenish of OSFY, this industry veteran, who has spent 30 odd years in understanding and sharing the value of open source with the masses, speaks passionately about the essence of open source. Excerpts:

Discovering Ghostscript back in 1988/89

Being a graphics designer, I came across Ghostscript circa 1988 or 1989. It was a muft and mukt alternative to Postscript. What intrigued me most about it was the licence—GPL, which got me started.

Those were the days when people were curious to understand the difference between freeware, shareware, crippleware and adware. But it was the GPL that made me realise this was a powerful hack of an idea that could transform the IT industry. I was excited from my first encounter and eventually devoted 14 years exclusively to the FOSS movement and its offshoots, most notably, Creative Commons.

It is impressive to see the adoption of Android, but at other levels, the real potential of open source is yet to be realised by Indians.

From 1982 to 1985 I was busy learning how to program in machine code on Zilog chips, and later in COBOL and BASIC on DEC mini computers PDP 11/70. But in a few years, I realised the game would be in digital graphics and design. So, I started with pioneering many techniques and workflows with digital graphics design, typography, and imaging in publishing. Eventually, I started consulting for the best IT companies like Apple, Adobe and Xerox in this field, and also with the advertising, publishing and even textile-printing industry. Concurrently, I focused on what was then called human computer interaction (HCI) and is now more popularly known as user-interface design and UX. This is the ultimate love affair between intuition and engineering. The huge impact of the computer industry on billions of people directly can be attributed to this synergy.

Your definition of open source: Muft and mukt is a state of mind, not software

Favourite book: ‘The Cathedral and the Bazaar’ by Eric S. Raymond

Past-time: Tasting the timeless through meditation

Idol: Osho, a visionary who talked about true freedom and how to exercise your individual freedom in your society

I’ve brought tens of thousands of people into the free and open source movement in India. How? By writing extensively about it in mainstream newspapers as well as in tech magazines, and by conducting countless seminars and public talks for the industry, government, academia, and the community. Besides, I was a core member of the Freed.in event, and helped to set up several chapters of Linux user groups across India. I ventured into consultancy, and guided companies on free and open source software. During my journey, I also contributed extensively to bug reports of a few GPL software in the graphics design space.

I still remember one cool evening back in 1995, when a couple of us hackers were huddled around an assembled PC. Somebody was strumming a badly-tuned guitar, an excited pet dog was barking at new guests… This was the founding of the Indian Linux Users Group, Delhi (ILUG-D). This was also the first official meet at the home of the late Raj Mathur, founding member of the ILUG-D. That meeting shaped free and open source software as a movement, and not just a licence. Everyone knows what happened over the next decade-and-a-half.

The reality of open source adoption in India

Today, it is all about free and open source software, and of open knowledge, which for me is way beyond Linux. Honestly, I am not happy with the way open source adoption has happened in India. In this vast country, there is one and only one challenge—the mindset of people towards open source. What’s happening in India is ‘digital colonialism’ as our minds are still ruled by proprietary software, proprietary services and a lack of understanding of privacy. We lack the understanding of our ‘digital sovereignty’.  To address this mindset, I wrote two whitepapers and published them on my website, www.niyam.com, which became very popular. The first was ‘Seven Steps to Software Samadhi: How to migrate from Windows to GNU/Linux for the Non-techie in a Hurry’. Published under the FDL licence, this initiative acquired a life of its own among the community. The second one was ‘Guerilla Warfare for Gyaan’, which was about bringing in free knowledge, especially in academia. Both were received well by the community, but we are yet to unlock the true potential of open source in the country.

How many of us really know that the highly sophisticated computer in our pocket is running Linux! Apple Macintosh and the iOS are based on the MACH kernel, Windows on BSD, and all of these are open source kernels. On a positive note, I would say that it is impressive to see the adoption of Android, but at other levels, the real potential of open source is yet to be realised by Indians.

We’ve managed to discover the magic formula for the adoption of free and open source software in India. Just make it invisible, and people will adopt it

You may wonder, “How did Niyam Bhushan survive and continue giving to the industry?” One should always remember that any community-building needs your time and effort, but gradually, it will start giving you returns in the most unexpected manner. This was not the real driving force for me. I love people and I love ideas. Sharing your knowledge and experiences in return brings you commercial opportunities, as well as a plethora of ideas that further enhance your understanding. My intention was never to be a multi-billionaire, but to earn more than comfortably for myself while following my passion. I wanted to touch the lives of as many people as possible and enrich my life with knowledge-sharing whenever and wherever possible.

The beauty of the community is that it seems like it is taking your time and effort, but it opens doors to lucrative opportunities as well. The community will continue to evolve around specific value-based pillars. For instance, in the vibrant startup communities of India, open source is fuelling a gold rush, propelling India to becoming a creator of wealth in the world. In academia, it is the highly local and focused communities that deepen learning and exploration. In the government and the public sector, their internal communities orient, adopt, collaborate and formulate policies.

What open source can do for:

Free and open source software (FOSS) is a wild dragon-child that can transform any organisation into a Daenerys Targaryen. But like her, you need to know how to tame this dragon, and where and when to use this effectively. Otherwise, its fire can and will consume you instead.

Whatever software a home user adopts (including proprietary and commercial software), open source offers fierce competition to push costs down, keep it free, enhance its performance, make it secure, or honour your privacy better. Hence, open source browsers are free. Home users get operating systems for free or a token fee. The latest Firefox outclasses even Google Chrome, while Telegram messenger and Signal outshine WhatsApp with their privacy and security.

That’s like singing to the choir. For the techie home user, open source is the best way to tinker and hack and, hopefully, also build the next billion-dollar unicorn in your barsaati.

Dos and Don’ts for developers

I insist that people should read their employment contract carefully. In most cases in India, I’ve noticed developers have signed away their rights to their contributions to FOSS in the name of the company, which may even keep them a trade secret, and may even threaten employees from using their own code ever again. Even if the software is under a free, muft and mukt licence, please carefully consider whom you want to assign the copyright of your work—to yourself, or your organisation.

Check with the legal department about policies on the use of code marked as open source. Often, violations occur when developers help themselves to code without bothering to check the implications of its licence.

A ray of hope

Unfortunately, people in India are not yet sensitised enough to the issue of digital privacy. If this sleeping giant wakes up to the importance of digital privacy, the adoption of open source will naturally become pervasive. IoT will provide the next push for open source across India, invisibly. Startups and entrepreneurs are and will continue to set up sophisticated cloud-based services deployed on free and open source software. So, here’s the magic bullet: sell your value-proposition, not your open source philosophy, and the market will adopt in droves. Beyond software, I see open source licences being adopted directly in agriculture, health, pharma and education, creating an exponentially larger impact than they could ever create as just software licences.

To conclude, I would say that we’ve managed to discover the magic formula for the adoption of free and open source software in India. Just make it invisible, and people will adopt it — hence the exponential growth in the adoption of Android in India. Arduino projects bring FOSS to kids. But for me, adoption of open source is successful when people start the relationship with it after understanding its true philosophy. This is one love affair with freedom!