API of Quick, Draw!, a machine learning doodle tool of Google, is now available on GitHub, contains data for developers who wish to manipulate it for their own research 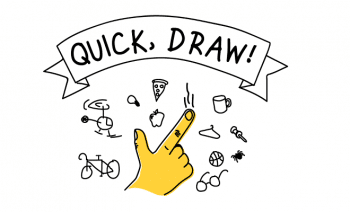 Google open-sourced the API of its machine learning doodle tool Quick, Draw! The API has a file dictionary containing 50 million files and returns a JSON object or an HTML canvas rendering for each drawing.

Quick, Draw!, a sort of digital Pictionary was released by Google in 2016. This is a machine learning tool which analyses sketches doodled by people. Since then, about 50 million of those doodles has been open-sourced to allow developers to do research on the way people draw.

“Since the initial dataset was released, it has been incredible to see how graphs, t-sne clusters, and simply overlapping millions of these doodles have given us the ability to infer interesting human behaviors, across different cultures,” said by Google in a press release.

That behavior includes 86 percent of Americans who draw their circles counter-clockwise, compared with 80 percent of Japanese people drawing them clockwise, from smaller datasets at least. The reason is thought to be how we learn to write, with Japanese people starting symbols going from the top left to the bottom right.

“The different ways in which people draw are like different notes in some universally human scale” – Ian Johnson, UX Engineer @ Google

There are other experiments also that shows some countries, people draw things like chairs in perspective and in other nations straight on, or that we all have our own way of drawing our own facial features.

Through these experiments it was found out that while drawing even a simple doodle, everyone has their own unique style.

“The different ways in which people draw are like different notes in some universally human scale,” said Google engineer Ian Johnson.

The component and data API is aimed at simplifying matters for creatives who wish to manipulate the data for their own research. The next step for the project, Google said, might be to store everything in one database for more complex queries.

The component and Data API will simplify the process for creatives out there to manipulate the data for their own research. According to Google, the next step for the project could be to store everything in a single database for more complex queries , for example – “give me an recognized drawing from China in March 2017”.