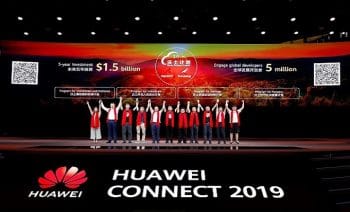 Chinese technology giant Huawei, which is facing US trade ban, unveiled its own open source software ecosystem on Friday (Sept 20) with the goal of attracting global developers and players to use its system.

At HUAWEI CONNECT 2019, the company also announced an investment of USD 1.5 billion in the next five years as part of its Developer Program 2.0.

Under this upgraded program, Huawei will provide funding to universities, individuals, startups and enterprises to support them in learning, product development and marketing.

The firm aims to work with 1,000 universities around the world to nurture five million developers in five years.

The goal is to partner with enterprises and individual developers to build the ecosystem of the computing industry, the company said.

However, Patrick Zhang, CTO of Huawei Cloud & AI Products & Services, acknowledged that it would be challenging, both on the technical and business levels, to get developers and firms to come on board Huawei’s open-source ecosystem.

That is why the firm is focused on making hefty investments in its developer programme in order to provide sufficient support for the developers, he added.

Since 2015, the firm has groomed 1.3 million developers

Huawei claimed that it now has 1.3 million registered individual developers and works with over 14,000 enterprise developers to innovate products and solutions.

Zhang highlighted the five focuses of Huawei Developer Program 2.0 in the next five years:

At the event, Huawei also unveiled the Kunpeng Developer Kit and ModelArts 2.0 AI development platform for software development on the Huawei Kunpeng and Ascend computing platforms.

HUAWEI CONNECT is an annual flagship event hosted by Huawei for the global ICT industry. This year it was held in Shanghai from September 18 to 20, 2019.

With inputs from The Straits Times