The Malayalam newspaper Janayugam has switched to GNU/Linux with Scribus. The team at Alpha Fork Technologies, which has enabled this change, and Rajaji Mathew Thomas, the editor of the newspaper, had an exclusive interaction with Sreejani Bhattacharyya of OSFY to discuss the various aspects of this switch. They also talked about how open source software could reduce the costs of the players in the print media space.

Rajaji Mathew Thomas, editor, Janayugam, adds, “The move to open source software did help us reduce the cost of OSs and software migration by almost one-third from what it would have been for the proprietary alternative available in the market.”

Alpha Fork Technologies is an IT company built upon FOSS. It provides services like Web development, software development, IT infrastructure management and technology consultation. Ranjith Siji and Mujeeb Rahman K. are the co-founders of the company. Other team members include Ambady Anand S., and Kannan V.M.

The Janayugam team earlier used Adobe Pagemaker for all the pre-press processes. But the team constantly received demands from its readers for better quality fonts and readability. So the management looked for an up-to-date, efficient software that would help them to do so. Thomas says, “We first thought of available proprietary software like Adobe InDesign, but we found it unaffordable for a medium-sized newspaper like ours. Such a shift in the software also requires upgradation of the system, including the OS. We even thought of abandoning the modernisation project and continuing with Pagemaker and ASCII encoding, before we began the migration to Scribus.” 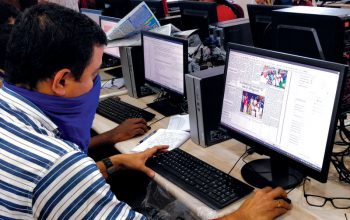 A trainee at Janayugom working with Scribus 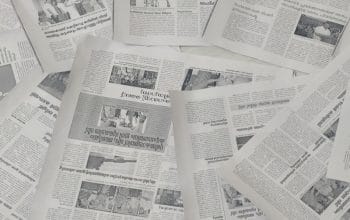 Sample newspaper pages designed in Scribus during the training

The switch to open source, though, required some hardware changes. Some printer and scanner models didn’t have official support for Linux so the team had to put in some work to make them compatible. Ranjith Siji adds, “There was a Canon IR 2002 printer and scanner, with unofficial driver images, for which we could make the printer work but not the scanner. The FOSS community was helpful by uploading their solutions to these issues and providing good documentation. We hope that these hardware companies will now extend their support to Linux, as the market share of the latter is increasing.”

Scribus is free for everyone
The team at Janayugam says that using Scribus has been beneficial financially. To begin with, Scribus is free for everyone, and there is no need to worry about expiring licences and monthly subscription fees. Though the team faced a few software bugs while implementing Scribus for the newspaper, it had a whole community to reach out to for support. On an average, the community responded to every bug report within 24 hours.

Kannan V.M., software developer and programmer, Alpha Fork Technologies, says, “We should remember that last major update of PageMaker was in 2001, also Adobe stopped supporting PageMaker from 2011 and since it is not free software, no community can support it or provide updates. Considering all these factors, the economic gains from the project are immense.”

Training for the Janayugam team
The Alpha Fork team trained the Janayugam employees and so there was no need for any fresh recruitment. Training was given over five days, with a short course on the new free software stack. Scribus has more features compared to the old software. This helped to reduce the routine work done during the past 15 years. The two systems administrators who were experienced with Microsoft tools received two weeks of training on systems administration in GNU/Linux.

Initially, it was believed that the migration to GNU/Linux from Windows would be difficult. But the entire staff adapted quickly and adjusted well to the new software. The focus of the training was to make the staff members understand the advantages of FOSS and to familiarise them with the new environment and tools. On the first day of the training programme, the staff was trained on how to use the KDE desktop environment, along with a few customised tools that were integrated with KDE to ease the workflow. The team says that KDE was chosen to reduce the learning period.

“We developed an ASCII-to-Unicode converter named ‘Janayugom Edit’ in order to support migration from ASCII content made using Pagemaker, to Unicode, supporting Scribus. It was inspired from the ‘payyans’ script developed by SMC (Swathanthra Malayalam Computing). We provided training on how to use it along with teaching the users the difference between ASCII and Unicode,” adds Ambady Anand S., full-stack Web developer and programmer at Alpha Fork Technologies. 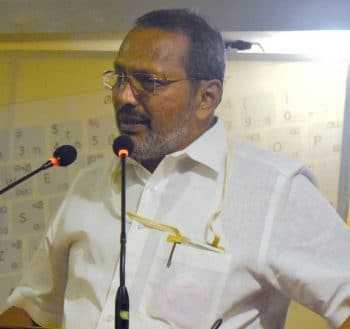 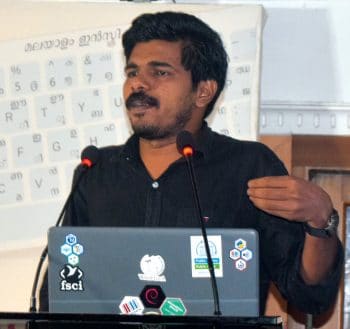 Traditional Malayalam script in a production environment
On the second day of the training programme, the team was introduced to image editing tools in GNU/Linux. This included a small hands-on session on how to use GIMP and Inkscape. From the third day, the main session started with training on basic typesetting in Scribus. Ashok Kumar P. K., a professional in typesetter training says, “Providing training on how to use DTP software within three days, in order to be able to design a newspaper that has 14 bureaus and production centres spread across the state, was supposed to be an unmanageable task, but the employees were very cooperative and enthusiastic to learn the new package. Most of them had more than a decade of experience in DTP and that made things easier.”

According to Hussain K.H., library and information scientist, the importance of this project lies in it being the first instance of the traditional Malayalam script being used fully in newspaper production. In the process, the team totally discarded the ‘reformed script’ that had been in use since 1970, which reduced the rich character set of traditional Malayalam.

The project adapted to the philosophy of the ‘Rachana Movement’ that became popular in 1999, to propagate the non-truncated script of Malayalam. Three fonts were developed for news headings, and the staff was given training in this character set from the beginning. The team had some issues like the text-scaling feature in Scribus during implementation. But quick responses from community members like Ale Rimoldi helped to solve the issues in a very short time.

What is Scribus?
Scribus is a desktop publishing software with support for professional typesetting and image setting. It is equipped with CMYK support and ICC colour management. It has a built-in PDF creator, and can import multiple file formats like Pagemaker, Corel Draw, IDML, etc.

“It has Unicode support, which was not possible with Pagemaker. Complex Text Layout (CTL) enabled by the HOST-Oman Project (HOST – House of Open Source Technologies), gave Indic language support to Scribus. It is because of the CTL support that Malayalam Unicode typesetting became possible with Scribus,” says Ranjith Siji, co-founder, Alpha Fork.

Migrating from ASCII to Unicode was a challenge
There were some other challenges as well. The first issue was the migration from ASCII to Unicode. Even though Malayalam Unicode was embedded in MS Windows since 2004, most newspaper reports are still typed and mailed in ASCII format to the editor’s desk. The Alpha Fork Technologies team had to develop software to convert those files to Unicode. It also had to provide support for Pagemaker files. Software libraries to support Pagemaker files were available from the Document Liberation Project, but these didn’t have proper support for Malayalam. So, the team modified the code to support Malayalam.
The biggest issue the team faced was that GIMP did not have CMYK support. There were some issues with Scribus too, but timely intervention from the community helped to solve the matter. “We had issues related to deprecated software at the printing press too, where they were using Windows XP that does not have proper support for Unicode fonts. We had to outline embedded fonts to solve this issue,” says Mujeeb Rahman K.

Hardware issues
With regard to hardware, the biggest issue was with peripheral devices. Printers and scanners that were bought without considering if they had support for Linux were the problem. The team had to use unofficial drivers to make them work at least partially. In spite of all this, the transition was smooth and the current workflow is better than the conventional one, according to the Janayugam team.

FOSS: A game changer for the print media
The print media is facing a financial crunch, globally, and the move to open source, as implemented by Janayugam, can be a game changer. Due to the emergence of online media and its wide reach, print advertisement revenues have dropped and many newspapers have been forced to shut shop. The cost of the raw material necessary for the production of newspapers is on the rise, and so switching to FOSS can be very beneficial.

Thomas says, “This move did help us reduce the cost of the OS and software migration by almost one-third what it would have cost for the proprietary alternative. That the basic DTP software comes free is the most attractive option. You need not pay any subscription or licence fee for the OS or software, and not even for the periodical upgradation.”

Currently, Adobe rules the printing industry and its subscription fee is hiked every year. However, for a more successful switch to FOSS, a few improvements are needed. Thomas adds that support for CYMK in GIMP is very important for printing. Also, Scribus does not have multi-thread support, which makes the system hang when dealing with a large number of page documents. If these limitations are fixed, it can become high-end professional DTP software, and become a strong contender for the proprietary software from Adobe.