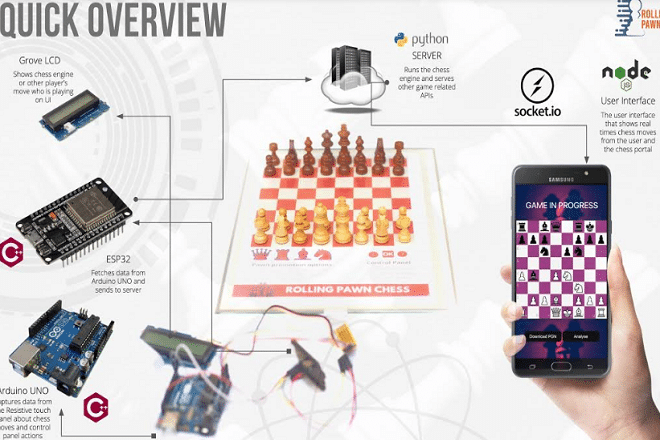 A team of developers in Bangalore working for a US-based company named Thoughtworks, have come up with a project of creating their own DGT like chess board. It has been named as the Rolling Pawn and the boards will be available at a price of Rs 3,000.

A DGT chess board is one where the player can not only connect to a chess clock but also to a computer chess program. Each of the moves one makes is automatically stored in the chess software on one’s machine. At the moment, such chess boards are created by DGT Projects, which is based in the Netherlands. They cost close to Rs.35,000.

DGT chess e-Boards are accurate and fast chess move input devices for one’s computer. They are used to register and record games and one is able to stream live games, play with opponents, and analyse your games. This helps chess players to learn and improve in the game. It can also help beginners to follow chess books and learn.

The Rolling Pawn comes with a four-wire resistive touch panel. In electrical engineering, a resistive touchscreen is a touch-sensitive computer display composed of two flexible sheets coated with a resistive material and separated by an air gap or microdots. It is the costliest part of the board and costs around Rs 1,800.

The team researched on whether there is a way to send the move from this board to a Stockfish, and play with it. It could not find any REST API which uses Stockfish engine. This made them create one.

Integrating an LCD screen to the board

The REST API is in a private repository at the moment but the company will release it along with the actual DGT board for free. After this, the first feature the team worked on was to display the move made on the real chess board to a chess board in the computer. By this time, the move from the chess board was already getting captured in a hosted server. Then the team created a UI to replicate the moves made by users on the real board.

The team said that after this it started to think about the issue if the player does not want to have a laptop or a computer screen while playing the game. Then, it started working on integrating an LCD screen to the board. The screen showed the player the engine moves so that the player can replicate the move on his or her board.

Then the team added options in the design for the user to choose the Engine Level and to choose Side before the game starts. In the Touch panel, it added options for pawn promotion, when the pawn reaches eighth rank.

As per the team, presently, it is working on viewing and analysing games that users played on the actual board with Engine. It is also working on a user interface that can allow two users to play with each other where one player is playing on real board, and one player on computer or both the players are playing on a real chess board and the game is available to view live and analyse later. Another area the team is working on is Lichess integration where one can play Lichess challenges from real chess board.

The team said that it has already started working on it and should be able to make our first release by the third week of May 2020. They will also create a robotic arm which will play with the player as an Engine. The touch panel will sit at the top of it and the pieces will move on its own said the team.