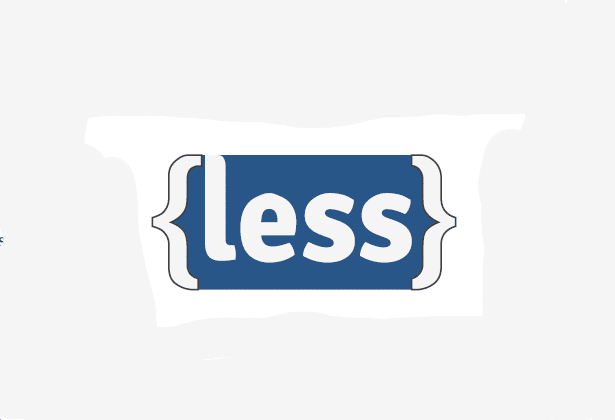 Less (which stands for Leaner Style Sheets) is a backwards-compatible language extension for CSS. Originally written in Ruby, it was later ported to JavaScript.

Created in 2009 by Alexis Sellier, Less or Leaner Style Sheets was inspired by Sass. It has a leaner feature set than Sass, and a syntax closely matching CSS, which Sass did not have at that time. In May 2012, Alexis turned over control and development of Less to a core team of contributors who now manage, fix and extend the language. The main difference between Less and other CSS pre-compilers is that the former allows real-time compilation via less.js by the browser.

Variables
As the name states, Less helps us to control commonly used values at a single place. We can see many values repeated in our CSS files very often. For example:

Variables make code easier to maintain by giving a way to control those values from a single location:

Mixins
Mixins are a way of including (‘mixing in’) a bunch of properties from one rule-set into another one. Say, we have the following class:

Now suppose we want to use these properties inside other rule-sets. Well, we just have to drop in the name of the class where we want the properties, in this way:

The properties of the .bordered class will now appear in both #menu a and .post a. In normal CSS, we would have had to repeat this multiple times. As you can see, variables as well as mixins help us avoid having repeated values in the file.

Nesting
Less gives you the ability to use nesting instead of, or in combination with, cascading. For example:

In Less, we can also write it this way:

The resulting code is more concise and mimics the structure of your HTML at-rules. For example, @media or @supports can be nested in the same way as selectors. The at-rule is placed on top, and the relative order against other elements inside the same rule set remains unchanged. This is called bubbling.

Operations
Arithmetical operations such as +, -, *, / , can operate on any number, colour or variable. If it is possible, mathematical operations take units into account and convert numbers before adding, subtracting or comparing them. The result has the leftmost explicitly stated unit type. If the conversion is impossible or not meaningful, units are ignored. Examples of impossible conversion are px to cm or rad to %.

Multiplication and division do not convert numbers. It would not be meaningful in most cases — a length multiplied by a length gives an area, and CSS does not support specifying areas. Less operates on numbers as they are, and assigns explicitly stated unit type to the result:

You can also do arithmetic on colours with Less:

Functions
Less provides a variety of functions that transform colours, manipulate strings and do maths. Using them is pretty straightforward. The following example uses percentage to convert 0.5 to 50 per cent, increases the saturation of a base colour by 5 per cent, and then sets the background colour to one that is lightened by 25 per cent and spun by 8 degrees:

Maps
As of Less 3.5, you can also use mixins and rulesets as maps of values.

As expected, this gives the output:

Sass and Less
Less is inspired by Sass. The latter was designed to both simplify and extend CSS, so things like curly braces were removed from the syntax. Less was designed to be as close to CSS as possible, and as a result existing CSS can be used as valid Less code.

To assign variables, Sass uses ‘$’ while Less uses @. The problem here is that there are a few existing CSS selectors that already use @. At times, this can be a little confusing. Sass and Less have extensions available to integrate mixins (the ability to store and share CSS declarations throughout a site). Sass uses Compass for mixins, which includes every option available with updates for future support. Less has Preboot.less, Less Mixins, Less Elements, gs, and Frameless. Software support for these extensions is supposedly quite fragmented, which means that we may have to use a combination of these.

Sass and Less were both initially on Ruby. Less was then ported to JavaScript. Much later, Ruby Sass was moved to Dart Sass, which compiles to pure JavaScript.