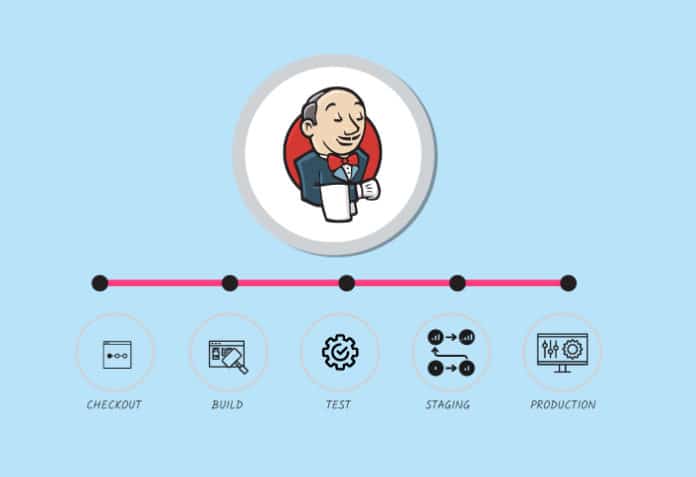 Jenkins is an open source tool that can integrate with the tools used in application life cycle management to automate the entire software development process. In this article, we will discuss different types of pipelines that we can create using Jenkins.

The installation and configuration processes in Jenkins are different since the release of Jenkins 2.0. Suggested plugins can be installed now. Jenkins 2.0 and later versions have built-in support for pipeline as code. Jenkins 2.x has improved usability and is fully backward-compatible. Let’s understand the traditional pipeline using the build pipeline plugin.

Pipeline as code helps you fix the above issues as it supports the following:

There are two ways to create a pipeline — Jenkins dashboard and Jenkinsfile. It is a best practice, however, to use Jenkinsfile. Table 1 explains some basic pipeline concepts.

There are two types of pipelines in Jenkins as of today. This means that Jenkinsfile can contain two different types of style/syntax.

A snippet generator can be employed to create script commands to use in the pipeline.

Similarly, the declarative directive generator section is used to create a script in declarative syntax.

Blue Ocean
Blue Ocean offers an easy way to create a declarative pipeline, with a new user experience available in its dashboard. It provides a pipeline editor where you can directly enter the script or add stages and steps using UI elements. Go to Manage Jenkins > Manage Plugins > Available and select Blue Ocean and Install without restart. After the installation of the Blue Ocean plugin, check the left sidebar where the new option emerges. Click on Open Blue Ocean. Verify the Blue Ocean dashboard. It provides a new user interface.

Figure 5 shows a sample pipeline in the Blue Ocean dashboard.

Pipeline as YAML
This concept helps to create a pipeline in Jenkins using the YAML script. It converts the script in the form of a declarative pipeline.

A plugin is used more as, or in place of, a converter. The following is a sample YAML pipeline:

Let’s write a sample pipeline in YAML with two stages that display on-stage execution of messages.

Click on Save and then click on Build Now. Verify the Console Output and the messages based on the stage execution. Verify that the script available is not YAML script but pipeline in declarative syntax.

If the script is valid, then it will be converted in the declarative pipeline syntax
(Figure 9).

If the YAML script is not valid, then an exception will be thrown. Click on Validate Pipeline to get more details on the exception and to check the issues (Figure 10).

Fix the issues and validate the pipeline again. Bingo! It is a valid YAML pipeline now, as pipeline conversion is successful (Figure 11).

In the Pipeline job, go to Pipeline Steps to find out how the steps have been executed and how much time a specific stage or step took to execute.