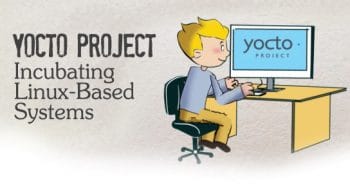 The Yocto Project helps developers and companies get their project off the ground. It is an open source collaboration project that provides templates, tools and methods to create custom Linux-based systems for embedded products, regardless of the hardware architecture.
While building Linux-based embedded products, it is important to have full control over the software running on the embedded device. This doesnt happen when you are using a normal Linux OS for your device. The software should have full access as per the hardware requirements. Thats where the Yocto Project comes in handy. It helps you create custom Linux-based systems for any hardware architecture and makes the device easier to use and faster than expected.
The Yocto Project was founded in 2010 as a solution for embedded Linux development by many open source vendors, hardware manufacturers and electronic companies. The project aims at helping developers build their own Linux distributions, specific to their own environments. The project provides developers with interoperable tools, methods and processes that help in the development of Linux-based embedded systems. The central goal of the project is to enable the user to reuse and customise tools and working code. It encourages interaction with embedded projects and has been a steady contributor to the OpenEmbedded core, BitBake, the Linux kernel development process and several other projects. It not only deals with building Linux-based embedded systems, but also the tool chain for cross compilation and software development kits (SDK) so that users can choose the package manager format they intend to use.

The goals of the Yocto Project
Although the main aim is to help developers of customised Linux systems supporting various hardware architectures, it has also a key role in several other fields where it supports and encourages the Linux community. Its goals are:

The Yocto Project community
The community shares many common traits with a typical open source organisation. Anyone who is interested can contribute to the development of the project. The Yocto Project is developed and governed as a collaborative effort by an open community of professionals, volunteers and contributors.
The projects governance is mainly divided into two wings administrative and technical. The administrative board includes executive leaders from organisations that participate on the advisory board and also in several sub-groups that perform several non-technical services including community management, financial management, infrastructure management, advocacy and outreach. The technical board includes several sub-groups, which oversee tasks that range from submitting patches to the project architect to deciding on who is the final authority on the project.

The building of the project requires the coordinated efforts of many people, who work in several roles. These roles are listed below: 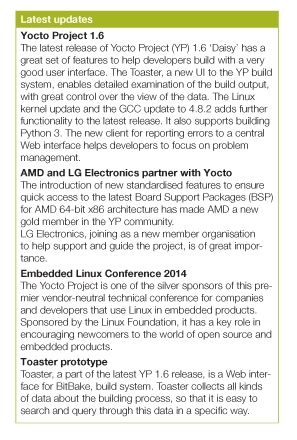 Layers
The build system is composed of different layers, which are the containers for the building blocks used to construct the system. The layers are grouped according to functionality, which makes the management of extensions and customisations easier.