HomeAudienceFor U & MeAndroid has been ruling and will continue to rule in the future...
For U & MeOpen strategy 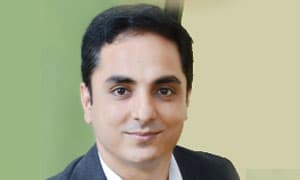 Motorola has been faring very well in the Indian smartphone market with the launch of Moto E, Moto G and Moto X. The company wants to take its success to another level with the new Moto G and new Moto X smartphones, and the Moto 360 smartwatch. Motorola launched these three devices in India recently and is still banking on the pure Android experience. Diksha P Gupta from Open Source For You caught up with Amit Boni, General Manager, Motorola, during the launch event in New Delhi and discussed the companys Android strategy. Read on…

Q What was the response to Motorolas recent brand re-launch?

We re-launched the brand in February. At that time we believed we were purely re-launching the brand but it turned into something much beyond that. Consumers just went crazy over our products. I think what we have been able to accomplish in the past 6-7 months was beyond our imagination. I am pretty sure that most of the people did not think that Motorola would be able to create such a benchmark with its products. I think we have had an absolutely smashing bunch of products. Our partnership with Flipkart has been phenomenal. We have made sure that we take care of the customers very well, not only at the time of buying, but even beyond that. These are the few things that are really paying back.

Q When you launched the first edition of Moto G in India, you faced a stock crunch. How do you plan to handle that situation with the new Moto G2 (2014)?

When we brought Moto G to India, we clearly underestimated the demand. But this time, we have better plans and better estimates. We have evolved much beyond the stage we were at during the launch of Moto G and Moto E. So hopefully, we will not face a supply crunch this time, although we dont have a sales target, as such. We would like to focus on products that deliver value and on our promises to the end consumers. We have been able to sell over a million Motorola devices up till now, including the Moto G, Moto E and Moto X. We hope to build upon what we have already achieved.

Q Motorola has always believed in Stock Android, but will things change after Lenovo completes its acquisition of your firm?

We are very focused on delivering the pure Android experience. So we are totally sure that we are not going to do any tweaking of pure Android. Having Stock Android helps us do a lot of things. People truly love the purest form of Android. Lots of companies think that putting a skin on Android gives them an edge, but I dont think so. The skins added to Android by the OEMs just make the devices bulky and slows them down. Stock Android is really helping us bring the latest and greatest Google experiences to our customers. I think this is something that has really worked well and so we will continue doing the same in the future as well. What we focus on is bringing out amazing devices, which are better than the previous ones. For us, that is the only war we have to fight.

Q So, since you are not working on the software part of the device, what do you think is the differentiator for your devices? Are you focusing on the hardware side of things?

Hardware is not just about the specs. The best specs do not necessarily mean the biggest processor or RAM. People can give you octa-core and then you will realise that your battery is draining in barely two hours. So we make sure that when we offer a device, you live it throughout the day and it gives you optimum performance. Even if we offer a quad-core device, the battery consumed will still last for 18-24 hours. The display is such that it doesnt eat up the batterys charge. It doesnt break easily. So it is not just about spec-to-spec comparisons, it is the whole package of what the device really offers in terms of the software and hardware combination. Our build quality speaks for itself, and I would like to say that people were pleasantly shocked to see the build quality that we offered in Moto E at such an affordable price. We believe that consumers deserve good products and that is why we build them.

Q Since you bank on the Stock Android experience, do developers have some part to play in building these devices?

We have a large engineering team in India, the largest outside the US. Our team of developers in India is responsible for an essential part of the devices that come out from our stable. And we are constantly looking at opportunities to leverage the fabulous engineering talent that India has to offer.

Q Xiaomi has also received a great response in the Indian market and is following the same online selling model as you did. How do you plan to counter such situations?

As I said, as long as we keep on providing the best possible devices and value, and make sure that we take care of our consumers, we know that we will continue to get the same acceptance that we received in the last six months. Our success story bears testimony to the fact that it is the best way to go; so we will continue on the same path.

Q When Android was first introduced, people liked it for many reasons. Apart from an ecosystem for free apps, Android became a reason for many to step into the smartphone domain. Have the reasons people look at Android changed over time?

I think the Android ecosystem has matured considerably over a period of time. A lot of developers have realised that there are more monetisation opportunities than just directly pricing the app. The ecosystem has matured so much that the interactions, which two years back were very app-centric, have become very app-network-centric. People now play games with their friends, through the apps. So, the ecosystem has evolved in a wonderful way, paving the way for a lot more opportunities for developers and connecting users. If I want to play chess, I can play a standalone game or I can play with my friends. So interactivity between apps and between people has increased due to this ecosystem. Android has been ruling this space and will continue to do so in the future as well.

Q What is your opinion about the Android One platform?
It is a great initiative from Google. I will not be able to disclose whether or not we will adopt that platform, but I can say that in a way, Moto E was the benchmark for a lot of things done today.

- Advertisement -
Previous article
Deploy Synergy to Share Your Devices
Next article
Software defined infrastructure is set to make the lives of IT heads easy!