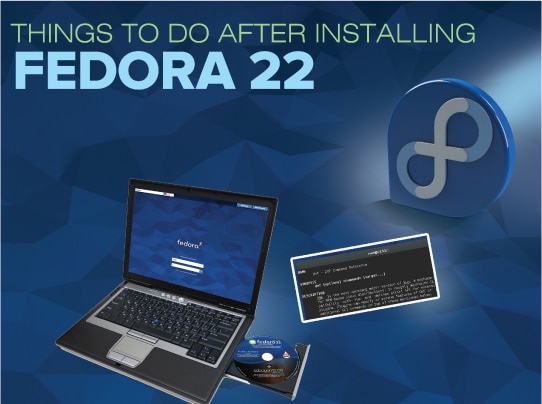 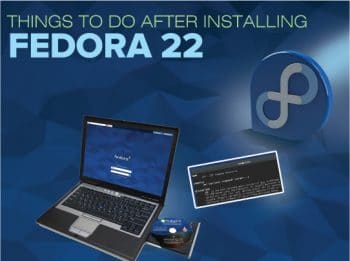 Having installed Fedora 22, a newbie is often at a loss for what to do next. This article guides the reader through the process of installing Fedora 22, explains the use of the DNF install tool and then suggests some applications to be installed.

Fedora 22 is one of the most commonly used operating systems in the open source world. It is popular among GNOME developers because most of the GNOME development tools are by default in Fedora 22. It is even more popular for its stability, when compared to other Linux distros.
Fedora 22, which comes along with GNOME 3.16, was launched last month. The latest release features some major changes such as the change in command line from Yum to DNF. The other new feature in Fedora 22 is boxes, which comes as a default with the system. It comprises virtualisation tools like Virtual Box, VMware, etc. Some plugin packages, such as gstreamer, which are required for playing.mp3, have been removed.

Installation of Fedora 22 alongside Windows
Many notebooks these days come with Windows 8 or Windows 8.1, by default, which has UEFI enabled in the boot options. If any Linux distro is installed alongside Windows, the UEFI creates a problem by not allowing Linux to boot. But from about a year ago, all Linux based distros support UEFI. Fedora 22 is way ahead in this game. It supports UEFI based machines without any problems.
The installation of Fedora 22 alongside Windows in UEFI is slightly tricky for beginners because if you try to boot it in live mode from a bootable pen drive, it just wont work. So, to create a live disk of Fedora 22, the use of LiveUSB Creator is recommended. LiveUSB Creator is a tool specially used to create live disks which support UEFI.

You have now successfully installed Fedora 22 in your notebook/laptop with UEFI enabled.

Yum to DNF in Fedora 22
After the installation of Fedora 22, when you try to do an update of all the packages from the terminal, you will see something like whats shown in Figure 2, on the terminal screen.
Previously, the Yum (Yellowdog Updater Modified) package installer for Fedora managed the packages in RPM format, so it became the package manager of choice for several RPM-based distributions. But Yum is fairly slow in performance and has high memory usage; code cruft has increased the overall time as well. So, from the release of Fedora 22 onwards the Fedora community has decided to use DNF (Dandified Yum) as the default package manager.
The reason for initiating the DNF project was because of the three big drawbacks of Yum: undocumented API, broken dependency solving algorithm, and the inability to refactor internal functions. The last issue is connected with the lack of documentation.

DNF (Dandified Yum)
DNF is a forked version of Yum that uses the libsolv library via Hawkey. There are a few more packages included in DNF, which increase its performance. These packages are based on Python. DNF offers some backward compatibilities with Yum. Desktop users using graphical package management tools like the software application wont feel a difference.
If youre using the Yum command in a terminal, you will be reminded that Yum is deprecated and that you should use the DNF command instead. DNF mostly works about the same as Yum. Most of the commands in DNF are similar to Yum commands.
The Hawkey depsolving library on which DNF is built is well designed, optimised and is itself built on a successful, low-level SAT library that SUSE has been using for years at production level workloads. The downloading and metadata parsing component used by DNF, librepo, is also well designed and complements the Hawkey API nicely.
Rather than use the DNF framework directly, packagekit (PK) uses librepo and Hawkey to share 80 per cent of the mechanism between PK and DNF. DNF is well organised with unit tests and lots of older compatibility cruft removed, and the only reason its not used in packagekit (PK) is that the daemon is written in C and isnt changed to marshal everything via Python for latency reasons.
DNF was designed to avoid mistakes made in Yum. From the start, all exposed API functions were properly documented. Tests were included with almost every new commit. So no quick and dirty hacks are allowed. The project is directed by agile development  the features that have the greatest impact on users are operatively implemented with higher priority.

Commands in DNF
The command line is the same when compared to Yum, and most of the commands are similar. Here is a list of a few basic commands used regularly in Fedora.
To install a package like nano, you would use the following command (as root):

To search for a package, use the search sub-command:

To upgrade the system as well as the packages, use the command below (as root):

During the install and remove processes, some temporary files will be created. To make sure that these files are deleted once they are no longer needed, use the clean all sub-command, as follows:

Things to consider after installing Fedora 22
1. Update the Fedora 22 distribution
Though you have just installed/updated Fedora (version 22), you cannot deny the fact that Fedora is at the bleeding edge, and when you try updating all the system packages you may find that lots of applications and utilities need to be updated.
To update Fedora 22, we use the DNF command as shown below:

Your ifcfg-en0 file should look something like whats shown in Figure 6.
Now open and edit a few things. Note that you should enter IPADDR, NETMASK, GATEWAY, DNS1′ and DNS2′ as per your ISP, as shown in Figure 7.

3. Install the GNOME Tweak Tool
GNOME Tweak Tool is a utility that lets you tweak and alter the default settings of the GNOME Desktop Environment with ease. You can easily customise your Fedora workstation in the GUI using the GNOME Tweak Tool. Most of the options in it are self-explanatory.
To install it, use the following command in the terminal:

4. Install the VLC media player
The VLC player is most frequently used in both Linux as well as Windows and is a must-have. To install it, use the following commands:

6. Install Nano and Vim
If you like editing files using the command line, you are using text editors such as Nano or Vim (Vi improved). To install Nano, run the following command:

7. Install Google Chrome
In Fedora 22, the default Web browser is Mozilla Firefox, which has benefits of its own, but many prefer Google Chrome. Heres how to install the latter. Open a terminal and issue the following command:

Then paste the following in that file:

8. Install the GIMP for photo editing
The GIMP is an image manager similar to Photoshop and comes with a bunch of handy tools. It is preinstalled in many Linux distros, but it is not part of the default Fedora install. To install it, simply run the following:

9. Install Pidgin  an IRC client
Pidgin is a chat client that can be used for multiple IM platforms. To install it, run the following command in the terminal: