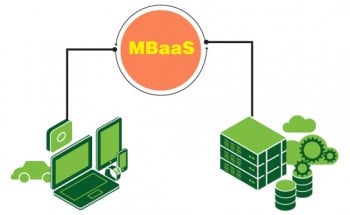 Mobile app development requires a considerable amount of back-end services to sustain the app. Rather than expend energy and time on the complexities of back-end services, developers would prefer to devote their efforts to developing the apps. Cloud BaaS (Backend as a Service) or MBaaS (Mobile Backend as a Service) providers now come to the rescue.

When we think of software or of Web and mobile app development, two things that come to mind are the server side and the client side. To put it in simple terms, the client side is the front end or interface screen(s) that the end user or client will see and interact with, whereas the server side is broadly a combination of application business logic and data management. With the availability of cloud computing, many of the server side complexities are handled by cloud service providers, as shown in Figure 1.

Software development is now moving towards app development, where the client side development requires more focus due to the variety of devices and platforms in use. This has led to reducing the interaction with servers and a whole new cloud service model has come into being, i.e., the Backend as a Service (BaaS) or Mobile Backend as a Service (MBaaS). This is a unique model, which enables mobile and Web developers to use cloud infrastructure as the back-end, hence freeing them from the headache of back-end designing and integration. It is like infrastructure that can be turned on just for mobile app development. As shown in Figure 2, mobile app development primarily comprises four activities. The major challenges for developers are with back-end integration and most of the effort is focused on this aspect, due to which application design and development suffer. The same applies for Web development also.
Creating a mobile application that works well is a complex and time-consuming task and needs a lot of planning to ensure proper execution. Some studies show that up to 80 per cent of the implementation effort is dedicated to back-end development.
MBaaS comes to the rescue as a server side technology for mobile apps, as it provides custom SDKs and APIs, as shown in Figure 3.
MBaaS is gaining popularity not only in the developer community but also in enterprises. According to Gartner, by 2016, 40 per cent of the mobile app development projects will leverage mobile back-end services. TechNavios analysts also forecast that the global BaaS market, which was valued at US$ 0.87 million in 2014 is expected to reach US$ 29.16 billion by 2019, growing at a CAGR of 101.88 per cent.

Why use it?
Mobile Backend as a Service (MBaaS) reduces the time and complexity involved in building mobile applications by providing pre-built, efficient, cloud-hosted components for mobile back-ends. It allows developers to focus on core features.

Major players
MBaaS can be grouped in different ways according to business requirements or based on licensing and support models.
Some major MBaaS players are shown in Figure 6.
Apart from the few companies shown in Figure 6, there are many other MBaaS or BaaS providers in the market and their numbers are growing. It should be understood that no single service provider fits all sizes. An MBaaS provider is selected as per the specific and unique needs of individual organisations.
Some common features that are desirable in MBaaS are:

Pricing
The major factors for MBaaS pricing are:

Case study: Parse.com
Parse is a start-up company that was acquired by Facebook and provides MBaaS. According to a case study by Amazon, Parse provides server management for over 180,000 Android, iOS and Windows mobile applications, which run on more than 200 million mobile devices. One can see the hundreds of Parse customers at https://parse.com/customers.