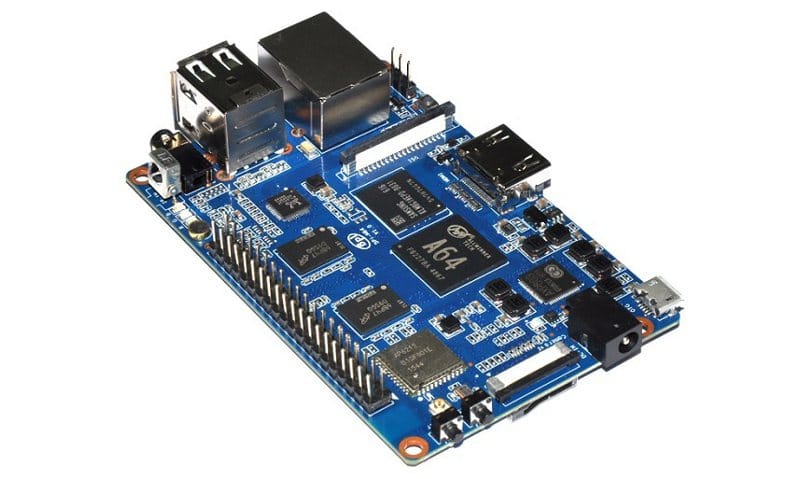 To rival the latest Raspberry Pi model, Chinese board maker Sinovoip has launched a new version of its Banana Pi. Called the Banana Pi BPI-M64, the new single-board computer features a 64-bit Allwinner A64 system-on-chip (SoC) with up to 2GB of RAM.

The Banana Pi BPI-M64 has four cores of Cortex-A53 at a clock speed of 1.2GHz. The board also includes a dual-core Mali 400 MP2 GPU and comes equipped with a microSDXC card slot that expands the built-in 8GB eMMC flash storage.

Similar to the Raspberry Pi 3, the new Banana Pi model has Wi-Fi 802.11 b/g/n and Bluetooth 4.0 connectivity support. There is a GPIO header which is pin-compatible with Raspberry Pi and two HDMI ports to support up to 4K video playback. Furthermore, the board has three USB 2.0 and a microUSB port with USB OTG support.

For producing content on a large screen, the 64-bit Banana Pi has DSI display interface support. Additionally, there is CSI camera interface to enable image and video production directly through the credit card-sized computer.

The Banana Pi BPI-M64 can run a variety of operating systems, including Android, Debian Linux, Ubuntu and Raspbian. However, there is no confirmation whether the new board would run Microsoft’s Windows 10 IoT core that already supports the newest Raspberry Pi version.

Sinovoip has not revealed the price of the new Banana Pi. But it is likely to be somewhere around the $35 price of the Raspberry Pi 3.