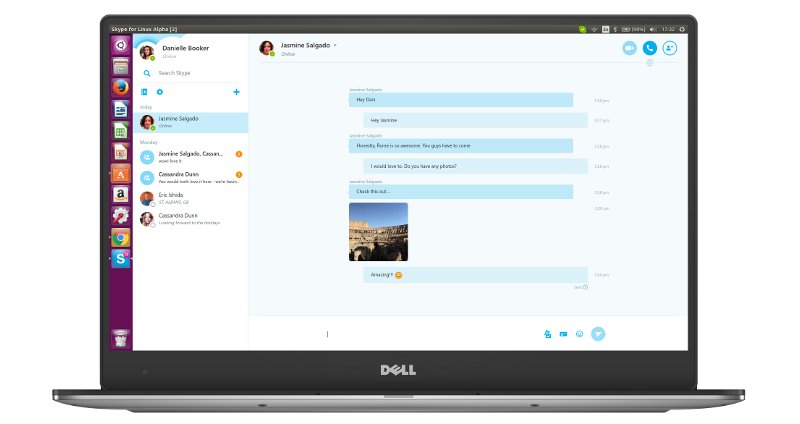 Months after its anticipation, Microsoft has finally released a new Skype for Linux client. The app isn’t as advanced as the one for your Windows or Mac system and is backed by open WebRTC project.

The new Skype for Linux emerges as an alpha version. This explicitly confirms the presence of some bugs and an inferior user experience over its counterparts on other platforms such as Windows, Mac and Android among others.

“As you may have guessed by the name, Skype for Linux Alpha is not a fully functioning Skype client as of yet. We’re sharing it with you now as we want to get it in your hands as soon as possible, so we can continue to develop the new version together. Once you’ve downloaded the app, you’ll notice that it’s very different to the Skype for Linux client you use today,” the Skype team writes in a blog post.

Some basic features that made Skype a popular VoIP client in the market are missing from the Skype for Linux Alpha version. These include the highly popular video calling support and 32-bit Linux compatibility. However, Microsoft is touting the new app to sport a “fast and responsive Skype UI” along with some new emoticons and options to share files, photos and videos. The video calling support is also likely to be arrived in the coming weeks.

Unlike some dated Skype versions for Linux platform, the new app is backed by an all new calling architecture. This new technology enhancement allows you to call directly your friends and family who are using the latest Skype apps on their Windows, Mac, iOS and Android devices but restricts the calling functionality for older versions based on the open-source platform.

While Microsoft is praising the new features, the Linux community has criticised the delay in the release of a full-fledged Skype version for the open source operating system. “Nice one, so you basically put Skype into a web renderer and release it like an application,” one of the Linux users commented on the Skype forums.

A community-based Skype version is reportedly delivering a similar experience from quite a long time. Called Ghetto Skype, the open source client is available on GitHub and has been using Electron framework to enable web-powered VoIP support.

In addition to the new release of the Skype for Linux, Microsoft has expanded its operations on Chrome OS and Linux by providing you an easier way to make free voice and video calls on Skype — without requiring an app or browser plugin. There is an ORTC technology that was already offering the plugin-free calling support on Skype for Web, Outlook and Office web apps.

You just need to visit the Skype website from your Chromebook or Chrome browser on Linux to start making one-to-one and group voice calls. Moreover, the Redmond giant is also in development to enable video calls and direct calls to landlines and mobile through Chromebook and Chrome browser in Linux.