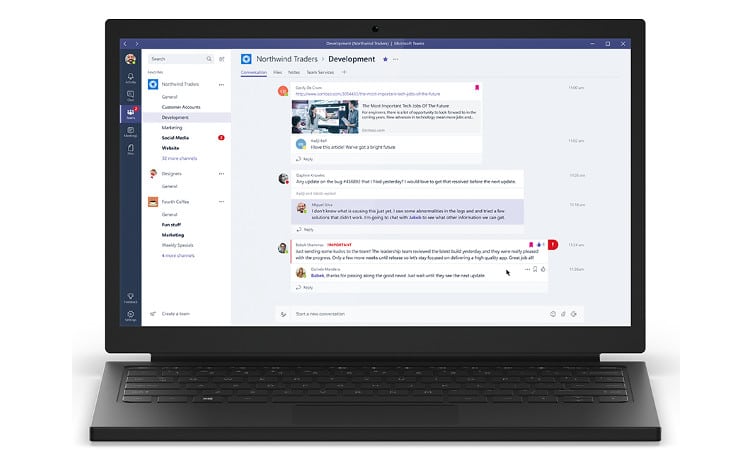 Interaction and collaboration are the two vital activities for any organisation to mark growth in this fast-moving world. While email services and social networks provide traditional channels to communicate, businesses today are seeking some advanced solutions to interact seamlessly. Microsoft Teams is one such solution for enterprises. It offers a chat-based workspace to bring different people in an organisation together and let them interact and share content.

Microsoft Teams is available through Office 365. Though the solution itself is closed source and a proprietary one — just like many other Microsoft offerings, developers have been provided with open APIs to customise the experience.

Using the cloud support from Office 365, Microsoft Teams allows organisations to jointly access various productivity tools such as Word, Excel and PowerPoint. There is the Microsoft Graph support to enable intelligent services on Teams. Additionally, Microsoft has integrated its Office 365 Groups to let enterprise employees transit from one collaboration tool to another.

Specifically to expand the reach of Microsoft Teams, there is the Microsoft Teams Developer Platform. “Developers can build apps and then test and distribute them inside an organisation using the developer platform. It also makes it easy for developer teams to integrate their own service, whether develop custom apps for enterprise or SaaS applications for teams around the globe,” Lall told Open Source For You in an email interaction.

Developers can integrate their apps into Microsoft Teams using the dedicated canvas within a particular channel called ‘Tabs’ or build some intelligent bots. Also, there is an Office 365 Connectors to extract information and rich content from external services.

“Developers can build connectors through incoming webhooks to generate rich connector cards. This enables teams to do things like track relevant Twitter feeds, collaborate on a coding project on GitHub or stay on top of tasks in Dynamics 365,” Lall said.

Analysts believe that Microsoft Teams is the “next progression” of how people interact and share between an organisation. It is considered as a step ahead of services like Skype, Yammer and Slack.

“With the help of Teams, Microsoft will bring together people, conversations, content and tools which teams need to collaborate on a single platform,” said Parv Sharma, research associate, Counterpoint Research.

Open platform is needed to grow

Parv presumes that developers engagements are quite important for a solution like Microsoft Teams. The Redmond company is already persuading developers through customisation tools. However, an open platform would succeed effectively.

“Teams needs to transform into a much more open platform integrate third-party developer solutions in order to succeed. It requires to help developers build an ‘a-la-carte’ of workspaces to align to different needs of the organisations,” Sharma told Open Source For You.

You can join the Microsoft Teams Developer Preview programme to integrate and showcase your offering for the collaboration platform. The initiative has brought over 150 partners at general availability that include Zendesk, Hootsuite and Intercom.

The Developer Platform provides you the way to create your own branded tabs, intelligent robots and deliver content and updates to channels.