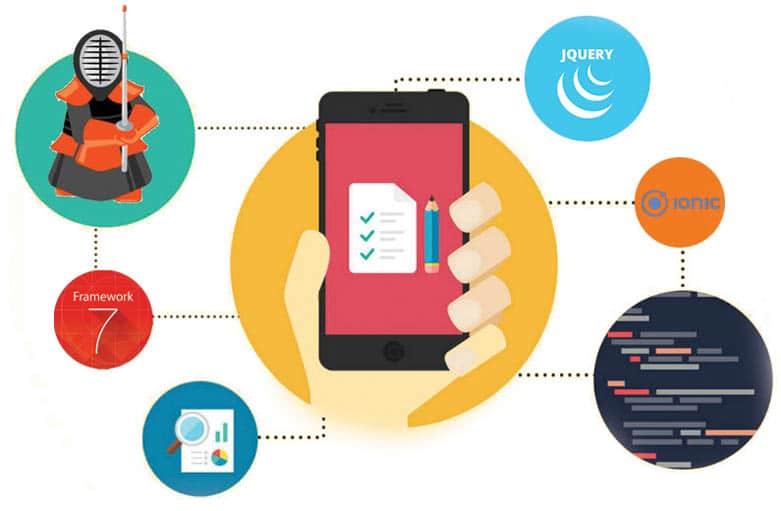 Mobile applications are either pre-installed on phones by the manufacturer, or delivered as Web applications using server-side or client-side processing to provide an application-like experience within a Web browser. Developing apps for different platforms, however, is a challenge, which can be addressed by using some of the best mobile application development frameworks discussed in this article.

For a large number of people, developing a high-end mobile application is a cumbersome task that requires a lot of programming skills and effort. Today, it is more important that the app you develop runs on all popular mobile operating systems. Hybrid mobile app developers are now able to write code once and build mobile applications that run on the main platforms with no extra effort. The same code for the mobile application that runs on Android and iOS can be reused for progressive Web applications and even desktop applications.

A framework is regarded as a complex software development environment. It includes many sub-components that help developers to create their respective apps. Sub-components may include tool sets, compilers, debuggers, application programming interfaces, different code libraries and many other components. A framework creates a strong base for mobile applications. Its professional usage simplifies the entire app development life cycle. Developers these days prefer to use frameworks to write apps instead of writing an application from scratch and dealing with thousands of lines of code to make the app multi-platform compliant.

In order to develop a mobile app that runs on multiple mobile operating system platforms, choosing the desired framework can be a complex task. Here is a list of some of the best open source mobile application development frameworks which are highly effective, helping developers to write apps in an easy manner.

Framework 7 gives app developers the opportunity to create iOS and Android apps with HTML, CSS and JavaScript in an easy and concise manner. It is not compatible with all platforms; rather, it mainly focuses on iOS and Google Material Design to offer the best-in-industry experience.

Ionic Framework is an open source software development kit (SDK) for hybrid mobile app development. It is developed on top of Angular.js and Apache Cordova, and provides developers with state-of-art tools and services for developing apps using various Web languages like CSS, HTML5 and Sass. Ionic offers a library of mobile-optimised HTML, CSS and JS CSS components, gestures and tools, and comes with pre-loaded components. Users can develop apps and customise them for Android or iOS, and deploy them via Cordova. Ionic includes mobile components, typography, interactive paradigms and an extensible base theme.

The Ionic Framework is a 100 per cent free and open source project, released under the MIT licence. It will always remain free to use, and is powered by a massive world-wide community. The framework has over 120 native features like Bluetooth, HealthKit, fingerprint authentication, and more, with Cordova and PhoneGap plugins, and TypeScript extensions.

jQuery Mobile is regarded as a robust framework to develop cross-platform mobile apps. It supports a wide range of platforms for app development like desktops, smartphones, tablets and e-book reading devices like Kindle. It even integrates various features like semantic mark-up, progressive enhancement, themable design and PhoneGap/Cordova support. One of the many features this framework offers is ThemeRoller, which helps you to create a unique design for your app.

jQuery offers many documents that will help you get in touch with this flexible framework. jQuery Mobile is built on the jQuery base. Therefore, you will have no problems with this framework if you are familiar with the jQuery syntax. The framework is powered by the Ajax navigation system. It ensures smooth animation of pages without any errors.

jQuery is a module-based framework, which allows you to create as many custom builds as you need.

Kendo UI Complete incorporates many products like Kendo UI Professional, as well as UIs for ASP.net MVC, JSP and for PHP.

NativeScript is a powerful open source framework for developing Android and iOS apps. Mobile apps based on NativeScript are built using various programming languages like JavaScript and TypeScript. It directly supports the Angular JS framework. NativeScript is basically designed to allow developers to re-use significant amounts of code when switching between developing Web and mobile phone apps.

NativeScript and all the required plugins are installed using the package manager, npm. Projects are created, configured and compiled via the command line. Platform independent user interfaces are defined using XML files. NativeScript then uses the abstractions described in the XML files to call the native elements of each platform. Application logic developed in Angular2 and TypeScript can be developed independent of the target platform as well. A NativeScript mobile application is built using the Node.js runtime and tooling.

Onsen UI is an open source framework for HTML5 based hybrid mobile app development based on PhoneGap/Cordova. It is also compatible with Angular and jQuery. Onsen UI provides a comprehensive set of Web-based UI components and features like a two-column view of tables and material design for unique app development. It also has a drag-and-drop GUI tool which is under development at Tokyo-based Asial, which has also developed Monaca.

React Native is an open source spin off of Facebook’s React JavaScript framework, which famously replaced the earlier HTML5 Foundation. As the name suggests, this high-end, iOS-focused program is more of a native app package than a cross-platform framework. But with its new Android support, it loosely fits our requirements, as you can essentially write once in JavaScript and port to both platforms. Currently, only OS X desktops are fully supported, although there are experimental Linux and Windows versions for Android development.

Intel XDK allows you to build cross-platform apps for each and every store. It includes Web services and plugins for content-rich, interactive and responsive apps that run on any device. This framework offers a complete range of tools that support development, emulation, testing, debugging and publishing. Recently, the developers made some big changes by supporting all the capabilities like developing mobile HTML5 apps (including Apache Cordova) for Android, iOS and Windows 10 UAP. They have now included software development capabilities for Node.js-based, on-board, IoT apps too.

Intel XDK provides a live preview of the app on the connected device while you are developing it, along with many other useful tools. You can create apps using a drag-and-drop approach, although this does create a lot of unnecessary code.