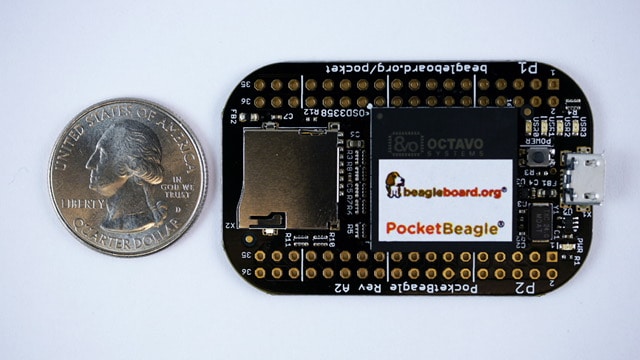 The BeagleBoard.org Foundation a nonprofit dedicated to developing open-source embedded hardware and software announces an innovativde creation. The foundation’s latest creation is the PocketBeagle, a single-board computer that runs Linux. It was debuted at the World Maker Faire this past September in New York City, and  won one of the first boards.

BeagleBoard.org makes a number of boards designed for different applications, such as robotics. These typically sell in the US $60 to $125 range. At $25, the PocketBeagle is designed to be a low-cost variant. But it’s not just a stripped-down version of the other boards, as it offers some interesting features of its own.

The PocketBeagle runs Debian Linux, and hence it is possible to develop applications in different programming languages, including Python, Ruby, or BoneScript. What’s really interesting about it is that in addition to a primary CPU that runs the Linux operating system (an ARM Cortex-A8 running at 1 gigahertz), the processor at the heart of the PocketBeagle also has two programmable real-time units (PRUs).