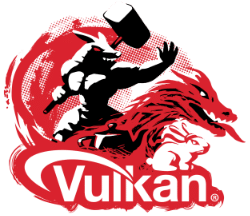 Vulkan 1.0 was actually released in February 2016. This OpenGL successor made a slow but steady foothold into applications and game engines.

Vulkan 1.0’s feature-set and functionality was never the reason for slow adoption. As opposed to the Microsoft-supported DX12 and Apple-supported Metal, the Khronos Group industry consortium is comprised of member companies that ratify specifications, and do not offer the same kind of unified development resources, tools, and tutorials.

Keeping in mind that Vulkan 1.0 primarily emphasised the software and specifications themselves, the Vulkan 1.1 release is coupled with further development of the Vulkan ecosystem.

“With enhanced developer tools, rigorous conformance testing and the public Vulkan Ecosystem Forum, Khronos is delivering on its goal to develop a complete and vibrant Vulkan ecosystem. Vulkan 1.1 is a response to prioritized industry requests and shows our commitment to delivering a functional roadmap driven by developer needs,” informed Tom Olson, distinguished engineer at Arm, and Vulkan Working Group chair.

Khronos has announced a new public “Vulkan Ecosystem Forum” to facilitate developer feedback and collaboration. This was further supported by Khronos’ efforts to expand platform support. As part of the Vulkan Portability Initiative,recently, an open-source collection of tools and libraries were released to port Vulkan applications to macOS and iOS.

The evolution of Vulkan from 1.0 to 1.1 is three-pronged: integration of developer-requested functionalities, driver support and seamless porting of Vulkan to more platforms, and then practical implementation by way of a developed ecosystem.    Read more…