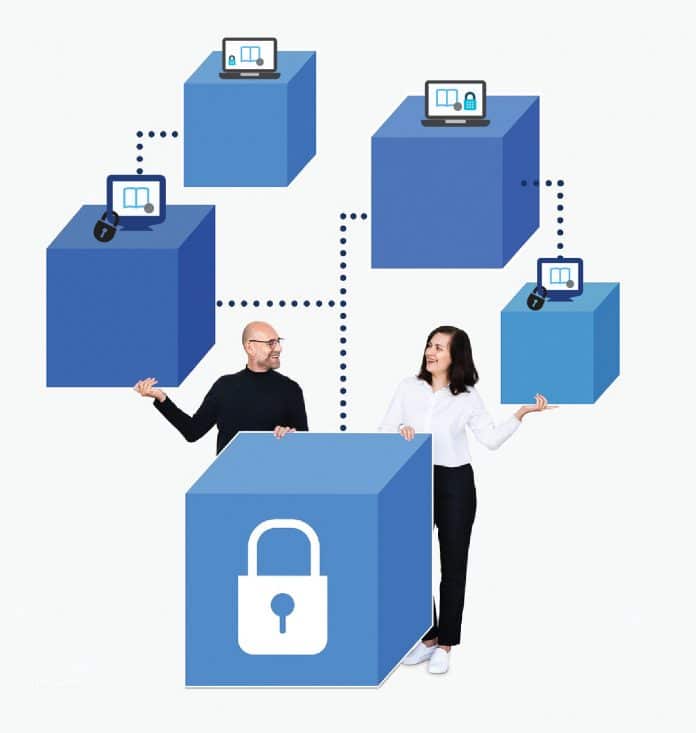 By virtue of being a distributed ledger in a P2P network, the blockchain is relatively more secure than data that is on a central server. It is made more secure by the use of powerful cryptography and algorithms. So decentralised applications based on blockchain technology provide excellent security for various types of data.

Blockchain technology is being widely used in the domain of cryptocurrency. A number of digital cryptocurrencies have gained prominence and are being shared throughout the world despite much criticism and controversies. These include Bitcoin, Ethereum, LiteCoin, PeerCoin, GridCoin, PrimeCoin, Ripple, Nxt, DogeCoin, etc.

The blockchain network has a block of records, in which every record is associated with dynamic cryptography so that all the transactions can be encrypted without any probability of sniffing or hacking attempts.Case studies

In case of a centralised application, if a hacker penetrates the server of a bank, then the details and records of all the customers can be copied. That is the main reason why government agencies should focus on decentralising their Web based applications.

The blockchain based decentralised applications can be used for the following:

Listed below are some of the leading FOSS tools for blockchain development.

There are other open source tools such as BigChainDB, Credits, Symbiont Assembly, Embark, Solidity, Truffle, etc, which interested readers can Google to learn more about.

Solidity is a powerful, high-performance programming language for writing smart contracts. It follows the object-oriented programming paradigm with a higher degree of security and performance, which can be integrated with assorted blockchain platforms. The Solidity code is compiled and transformed to bytecode, which is executed on the Ethereum Virtual Machine (EVM). Solidity programming has the key base of many programming languages and scripts including Python, JavaScript and C++ so that it can be integrated with multiple environments and platforms for integration with blockchains. To work with Solidity, there are many integrated development environments (IDEs) and editors that can be used including Remix, EthFiddle and JetBrains.

The URL of the Web based remix IDE is remix.ethereum.org and it can be accessed directly from Web browsers for writing, compiling and executing the smart contracts.

In the following source code, a new currency MyCurrency is programmed using Solidity. The new currency with its own set of rules, protocols and security mechanism can be initialised during code customisation.

On clicking on the Deploy option in the Remix IDE, the code is executed and detailed logs of the transaction can be viewed.

The detailed logs of the blockchain transaction can be analysed. There are multiple parameters in the transaction log including the gas limit, which in smart contract programming refers to the amount of work or throughput associated with the transaction.

NodeJS is a cross-platform open source platform for JavaScript based programming. It can be used for multiple applications including blockchain development, smartphone applications, distributed Web applications, NoSQL processing, Big Data analytics, machine learning, Internet of Things (IoT) and many other topics related to advanced computing.

For blockchain programming, NodeJS is integrated with Web3JS, which is the set of libraries and tools for interaction with blockchain based connections.

The Web3JS platform for blockchains and dApp can be integrated with the following instructions:

After installation, the code in JavaScript and Server Side Scripts is written with the smart contracts and deployed for the secured applications.

Truffle is another programming suite for the development of blockchain based smart contracts that can be installed with NodeJS and be executed on Ethereum Virtual Machine (EVM).

With the execution of the following instruction, the Truffle suite is associated with NPM:

After the installation of Truffle, the installed version can be checked in the terminal as follows:

A new project, MyBlockchain in Truffle can be mapped as follows:

In Truffle, the directory structure given below is followed to code the application:

A new file <filename.sol> is created in the contracts/ directory for the base coding of smart contracts in the following format:

The compilation of Truffle code is done as follows:

The Embark framework provides the tools and libraries for the development of decentralised apps so that blockchain based implementation can be executed. Embark can be used as an alternate to Truffle. To work with Embark, you need to integrate Node Version Manager (NVM) with multiple versions of NodeJS.

NVM can be installed as follows:

Once NVM is installed, the toolkit of Embark can be associated as follows:

After installation, the initialisation instruction is executed for the new project, as follows:

By using ‘embark run’, the dashboard of Embark is invoked.

The token generation can be further written in code as follows:

As in the above example, MC refers to the new currency symbol, which can be anything, depending on the requirements of the smart contract associated with the blockchain.

As blockchain based development is an emerging domain of research, there is a need to address different issues related to privacy and resource optimisation. In blockchain and other decentralised applications, the data is replicated to numerous devices and the issues of security and integrity do not arise. With the development and deployment of advanced algorithms, the performance of blockchain based implementations can be elevated further.

Darktable 4.0 Is A Significant Upgrade To The Open Source Lightroom...