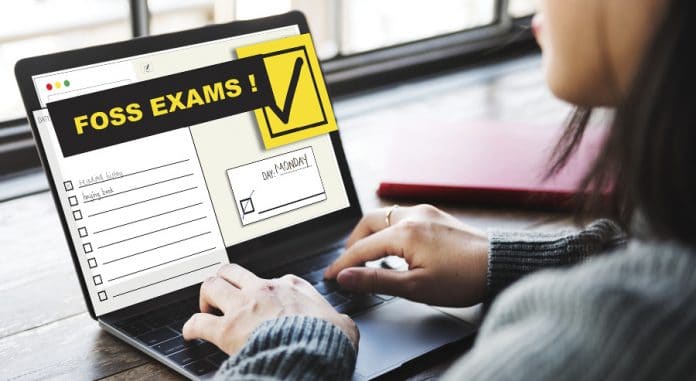 Evan Leibovitch is the director of community relations for the Linux Professional Institute, an organisation he helped found two decades ago “to support the growth of open source.” The institute has conducted half a million exams across the world since then.

I’d heard about the Linux Professional Institute (LPI) ages ago, and was glad that my path crossed with that of its co-founder, Evan Leibovitch. What made me happier was when Leibovitch took out a small Tux, the yellow and black penguin that has long been the FOSS mascot, and presented it to me when we met against the backdrop of the Creative Commons 2019 Summit in Lisbon recently.
On the LPI’s board are other big names like Jon ‘Maddog’ Hall, a programmer since 1969, who’s worked on UNIX since 1980 and on GNU/Linux since 1994; and others like Bdale Garbee, a contributor to free software since 1979, as well as being a big time Debian contributor.

These stalwarts seek to achieve their goal by “helping people get work in Linux and advance themselves in it” — in other words, by advancing professionalism in the operating system (OS).
“For most of the 20 years that the LPI has been around, we’ve been doing skills certifications based on jobs. So if an employer doesn’t know anything about the OS, but needs a third party to verify somebody’s skills, then this certification is the way to do it,” explains Leibovitch.

Here are some stats about this pioneering institute — sources at the LPI say it has conducted half-a-million exams over the past 20 years. In over 180 countries worldwide, there is at least one LPI certified person, and exams are held in seven languages. “If we were able to determine that there was enough demand for this in Hindi, we’d do the exams in Hindi,” Leibovitch says. The institute claims to thrive on international work. Leibovitch says the certifications are respected by employers and academic institutions, globally.

Says Leibovitch, “We’re not the only ones offering certifications out there. Red Hat is also doing skills certification. We are headquartered in Canada but operate globally. We work with a social mission to improve the OS by improving the people who work with it.” Certification, he says, is not an end in itself; what’s important is how you get there.

The LPI soon plans to launch a membership programme too. That will allow people to engage in professional development. In much of the IT certification world, if you don’t retake exams every five years, your certification expires. The LPI aims to take a different approach. Its membership programme will help to keep one’s skills relevant and current by encouraging people who’ve been certified to continue their professional development by taking courses, mentoring, participating in OS projects and getting involved in the community.

These plans will help the LPI to “resemble a legal association or an engineering society more than a conventional IT certification centre.” Those heading the LPI also believe in distro-neutrality. Someone who takes the LPI exams should know all versions of GNU/Linux, and not get locked into just one way of doing things, Leibovitch says.

He adds: “We don’t make money from training. We work with partners anywhere in the world, using all kinds of training methods, even online. By not engaging in competitive practices or having our own training material, we encourage third parties to make money off training or publications and hence we manage to work with others.”

The LPI exams cover certain topics. They begin with Linux Open Source System Administration (LPIC) at three levels — junior (Linux administrator), intermediate (Linux engineer), and senior administrator (Linux enterprise professional — mixed environment, security, or virtualisation and high availability). At the higher levels, you get involved with enterprise deployments and very high level intrusion detection. Each of the exams is for a different level of skills.

The LPI is also working to introduce certification for DevOps engineers. Leibovitch says they’re working with the BSD group to make their certification programme accessible worldwide, using the latter’s distribution network. “So the LPI will soon be delivering both BSD and Linux exams,” he adds.
A new programme that LPI is looking to come out with later this year is a non-technical certification called BOSS, or the Business of Open Source. It is aimed at policy makers and IT managers who need to know the reality about business, licensing and distribution models. It highlights the differences between BSD and GPL (General Public License). “When you’re from within the community, you might know those aspects very well. But IT managers doing the hiring, and deciding on buying choices and deployments, need to have something that gives them a specific target — something that’s factual, complete and fair,” Leibovitch explains.

Asked where the LPI has been attracting the most examinees from, Leibovitch replies: “LPI exams are going to be in high demand in any country where Linux and the OS is highly utilised. This is for anyone working on the cloud or on Android, since this is all Linux based. It’s also relevant for all those who want to demonstrate their credentials internationally.”

Right now, Leibovitch says that the LPI is “extremely successful in Japan, Brazil, Germany and throughout a lot of Western Europe, USA and Canada. In some countries like South Korea, its popularity was surprising to us. We do have a significant number in India, but not to the extent of what’s possible.”

How do students prepare for the exams? If examinees feel they can do it on their own, Leibovitch is okay with that. “We publish our objectives on the website. Then you decide if you can teach yourself, or if you have been working on it and only need to fill the gaps. Some want to buy a book or take training, and that’s where we want to bring in our partners who could offer training,” he adds.

The LPI is working with two school boards, in Michigan in USA and the city of Madrid in Spain, which are experimenting with an LPI-directed programme at the high school level. They’re working with academics, as well as with the private sector in publishing and training. “We will work with anyone who’s willing to. We want to encourage an ecosystem that will tailor itself to anything people need — online, classroom, or via books,” adds Leibovitch.

Leibovitch has been involved with promoting open systems and open standards, as well as with other community work. He helped create the Canadian Association for Open Source, and has also been involved with Internet governance via ICANN (Internet Corporation for Assigned Names and Numbers), which is about computing for the public good and from a consumer point of view. “Openness is important to me — in Internet domains, computer software, transparency, ethics and doing things the right way,” he adds.

The LPI exams are run by Pearson VUE (Virtual University Enterprises), a pioneer in the electronic testing industry. The results are immediate when tests are online. “In exam labs, we deliver in a classroom setting – old-fashioned pen and paper, which reduces the cost of testing. I look forward to working with some events in India,” says Leibovitch.