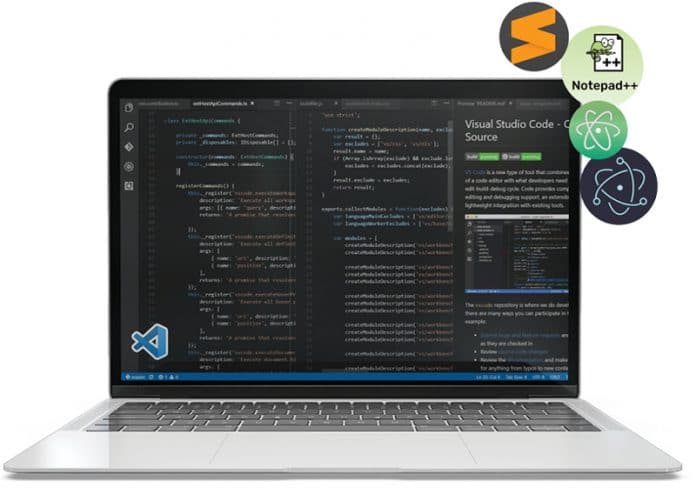 Since the release of Visual Studio Code in 2015, Microsoft tools and software have become a popular choice for most developers. There are a number of open source tools, however, that work very well with Windows, and should be used by developers who work with Windows software. Eight of these tools are discussed in this article.

The life of a developer pretty much revolves around coding. However, any generalisation is bound to be hit by exceptions, as we have several developer entrepreneurs emerging in the software industry now, like never before. Open source software helps budding enterprise developers to leverage the best software and tools to establish their businesses.

Let us discuss some of the essential open source software that all developers (pure or with entrepreneurial interests) should have in their code room. The unique features that make these tools worth using and how they help developers are also discussed in detail.

The popular open source software that go well with Windows are discussed briefly below.

The one thing with developing is that the moment you get an idea, you must be able to have it coded. The more you delay the job, the more you get frustrated and the coding loses its simplicity. Visual Studio does a great job in this aspect of coding. It is a code editor that never comes in your way and that’s the beauty of it. The smooth edit-build-debug cycle means you can quickly get your ideas running. The built-in debugger, as shown in Figure 2, lets you speed up the usual cycle with ease.

A few remarkable features of Visual Studio Code are listed below.

a. Side by side editing: You can open as many windows as you want, be these vertical or horizontal. There is also an option to alter the behaviour of the team by having side editors, as per your choice.

b. Minimaps: This is the code outline feature that gives the developer a bird’s eye view for easy navigation and understanding.

c. Exceptional architecture: VSC is an intelligent assimilation of language-specific, Web and native technologies. The internal consistency of the architecture adds to its rich customisation.

2. Postman
Postman is an API client that is used to develop, test, share and document APIs. It provides API management, construction and integration. These and many other exceptional features make Postman the apple of the developer’s eye.

Postman is a comprehensive tool that packs in almost everything to make a developer’s life simple and joyful. It supports every method of HTTPs, converts APIs to code version, modifies the API environment, and much more.

You can generate code snippets from the extensive list of available frameworks and languages. This comes in handy when the request you made in Postman is complete and you want to call it from your application.

3. Git
This is one of a class of multi-faceted tools that can guide enterprises to manage, deploy and complete projects with efficiency. It is among the top in its category with its lightning-fast speed and performance.
Branching is a remarkable feature of Git that reflects every change a developer makes to a code base. It allows creating, merging and deleting lines and branches instantly.

A pull request is a novel way to manage teams and coders of different levels of expertise. It is a request by which, say, Developer 1 asks Developer 2 to merge one of the latter’s branches with one of the former’s repositories. The pull request helps the project lead to keep track of edits and open up lines of communication between coders.

A faster release cycle is the natural consequence of distributed development, pull requests, a stable community and branches. Even a small change by a developer is communicated and encouraged. Hence, regular short-period updates are possible instead of having to revise or review big chunks of code.

4. Atom
Atom is a first-class text editor that is open source; it supports Windows, Linux and OSX. Atom was developed at GitHub.

Atom is synonymous with smoothness. It aids developers who work on many files simultaneously. The editor does it through the split-pane feature. You can create pull requests, branches, stage changes, commits and much more with Atom.

The tree view supports different indentations, for example, of JS, CSS, HTML, etc.
Some of its notable features are:

5. Electron
This is an open source framework that lets you build desktop suite applications. It leverages native Web technologies like JavaScript, HTML, CSS, etc, in such a way that you can focus on the critical aspects of the application.

A brainchild of Cheng Zhao who’s an engineer at GitHub, Electron is an amalgamation of two technologies — Chromium and Node.js. Initially called Atom Shell, it was later renamed Electron.
The defining feature of Electron is that you don’t need any essential skills to use it except at the advanced levels. The Node.js APIs, on which the file system is based, run on Windows, Linux and macOS X.

What makes desktop app-making challenging are the packaging, installation, updating, menu support development, management of notifications, dialogues and finally, the crash report optimisation. Electron takes care of all these aspects with simplicity so that a developer can focus on the core part of the app.
Electron is the choice of many developers working on Windows for its npm module, native menus, dialogues and ready-to-use Windows installer. The self-updating feature, plus crash reporting with Squirrel, make it attractive.

6. SubLime Text
SubLime Text is known for its clean, functional and fast code editing capabilities. The built-in features include the multi-edit mode, Vim mode, support for plugins, snippets and many others.

A few of its features are listed below.

a. File switching: Developers can switch between the files using a simple command like Ctrl+p. This is a fast way to open up new files.

b. Goto with Ctrl+r: This is a time saver to easily pick up the method you are looking for, from a large number of them.

c. Snippets: You can use the available snippets, or install and build your own. SubLime allows everything. It can quickly expand the word you type into a snippet.

d. Projects: You can drag any project from the whole list using SubLime’s project call and switch features. You can add projects, define the existing one, or switch between them.

e. Plugins and packages: You can find, install and manage packages with ease. Package control is installed through the command palette, which is another great feature of SubLime. Using Python, the placing of each package is scanned for plugins and reloads automatically when done.

7. Notepad++
This is a source text editor for Windows written in C++. Although the user interface (UI) of the text editor is ‘not-so-impressive’, it’s nevertheless easy to find your way around it.

Unlike similar software of the type, Notepad++ goes for a fully packed front screen. It follows a vibrant theme approach when compared to the minimalist policy followed by other software. So for a text editor with so much functionality in one screen, Notepad++ stands aloof.

One of the remarkable features of Notepad++ is that it supports more than 50 scripting, markup and programming languages. Users can define their code, highlight syntax, do code folding and so on.
Notepad++ is a very portable tool, and can work even from a USB stick. It makes auto-indentation a lot easier than other editors and supports brace highlighting as well.

The highly customisable user interface is a great feature of Notepad++, whether the user wants to create a split-screen, work in full-screen mode or apply themes from the Configurator.
Multiple cursors are a Notepad++ feature, and help in making code changes in several places at once. The user can find this feature in the Preferences menu and enable it from there.

8. Slack
Slack is the ultimate project management software that can make life easy as a developer, as a manager or as an entrepreneur.

Slack allows for all types of communication within a project team. The developers working in different directions can get a comprehensive view of the things they do. Channels are a fundamental feature of Slack and let you build teams on various work-related aspects.

The main features of Slack are listed below.
a. Communication: Both face-to-face and face-to-screen communication are possible.
b. Integrates file sharing: You can drag-and-drop files instantly, get and give reviews and feedback, etc.
c. Mentioning: It lets you use @mention or a user group to include direct connotations to team members and specific works, teams, etc.

There are plenty of other tools that developers use around the world. However, to list them all is beyond the scope of this article. The open source tools mentioned in this article need to be in the arsenal of every developer who wants a rewarding professional career. Check the tools and get the best out of them for a happy coding life.