Home Audience For U & Me The Programming Languages Alphabet 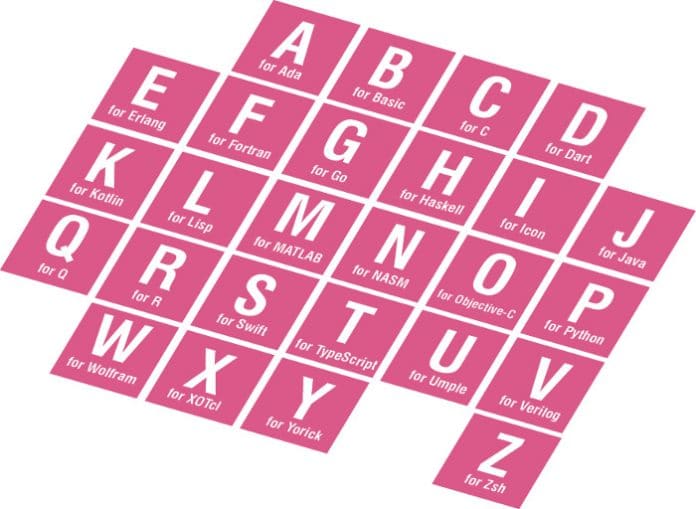 Ada is a programming language that supports both imperative and object-oriented programming paradigms, with safety and security as the main concerns. GNAT is an open source compiler for Ada which is part of the GNU Compiler Collections (GCC). Ada has the support of a small but stable developer community. The programming language Ada is named after Ada Lovelace, the daughter of Lord Byron (famous English poet). Ada Lovelace is considered a pioneer in computer programming for her work with Charles Babbage while trying to develop his unfinished yet famous Analytical Engine. Even though I have selected Ada, do remember that assembly languages are very important in programming but it is not single programming language; rather, they are a family of programming languages.

This is one letter where the number of influential programming languages is very high. There are programming languages like C++, C#, Clojure, COBOL, etc. But here the choice is obvious – it is none other than C, which was originally developed in 1972 by Dennis Ritchie at Bell Labs. Even after almost 50 years of existence, C is still widely used professionally as well as in academia. So, justifying the choice of C is unnecessary.

Go (also called Golang) is developed by Google. It is a popular programming language that features in the top ten list of many rankings. Go is similar to C, but with added features for security and garbage collection. Go has multiple open source compilers with BSD licences. There is no other programming language starting with the letter G worth mentioning other than Groovy, which is an object-oriented programming language heavily influenced by Java.

Haskell is a functional programming language that was developed in 1990. The Glasgow Haskell Compiler (GHC) is a popular open source compiler for Haskell released under the New BSD licence. Haskell figures relatively high in many rankings. The Hindawi Programming System is a collection of open source programming languages that use Hindi, Bengali and Gujarati scripts for writing programs.

The letter J in our programming language alphabet is definitely reserved for Java. The quote, “You can love me or hate me but you can’t ignore me,” is absolutely true for Java. Appreciative or critical, no real programmer can ignore Java. I don’t think I need to justify my choice and so I rest my case. But JavaScript is also worth an honourable mention. JavaScript is an interpreted scripting language which is a permanent member in the Top Ten lists of most rankings.

The letter M is for Maple, Magma, MATLAB, Maxima and Mathematica — the programming languages and mathematical software used to support serious mathematics rather than, say, finding the sum of two small integers and displaying the result on a Web page. Even though Maxima is open source software, I have chosen MATLAB, a proprietary commercial software. I believe the widespread use of MATLAB justifies its selection. M is also the letter that reminds us about machine languages and all the pioneers who wrote programs on punched cards.

N is another letter in this sequence whose removal will not affect the programming community much. Netwide Assembler (NASM), an assembler and disassembler for the Intel x86 architecture, is my choice here. NASM is Turing complete; hence, it can be considered a programming language. It is released under the BSD licence.

The choice for the letter Q is Q#, a programming language released by Microsoft for developing quantum algorithms. Q# is the newest programming language included in our list, with the first release coming in December 2017. It is influenced by both C# and F#. Recently, we have heard that Google achieved quantum supremacy and hence will make quantum computers a reality in the near future, hopefully. So, it is possible that Q# or similar programming languages will play a pivotal role in the programming world in the not-so-distant future. The other two programming languages in this category worth mentioning are QtScript and QBasic.

This letter too doesn’t have much to offer. But for the sake of completion, Umple represents the letter U in our alphabet. Umple is an object-oriented programming language used for modelling with class diagrams and state diagrams. It was first released in 2008, with the latest stable release in 2018. But do remember that the UNIX shell being Turing complete qualifies as a programming language.

Consider any decent programming language that has some followers and prefix the term with the word ‘visual’ and you will get a new programming language! I am not joking – we have Visual Basic, Visual Basic.NET, Visual C++, Visual FoxPro, and many more as proof. In spite of this vast choice, I prefer VHDL (Very High Speed Integrated Circuit Hardware Description Language) or Verilog, both hardware description languages. My description of hardware, often limited to the price, made the choice very difficult. A cursory glance over a few articles made me believe that Verilog leads the race between the two marginally and hence the choice. But I will be very happy to switch sides if somebody could convince me why VHDL is better than Verilog.

My ns-2 (network simulator-2) simulation days made me choose XOTcl from an otherwise insignificant list of programming languages. XOTcl is an object-oriented extension for the Tool Command Language (Tcl). XOTcl is used for topology generation in ns-2.

Z is another letter with no significant programming languages in the list. But since any tool that is Turing complete qualifies as a programming language, I am nominating Z Shell (Zsh). Z shell is an interactive login shell and a command interpreter for UNIX shell scripting. In the latest major release for Apple Macintosh computers, macOS Catalina has Zsh as the shell instead of Bash.