Home Content Basics Python Libraries that Developers Should be Familiar With 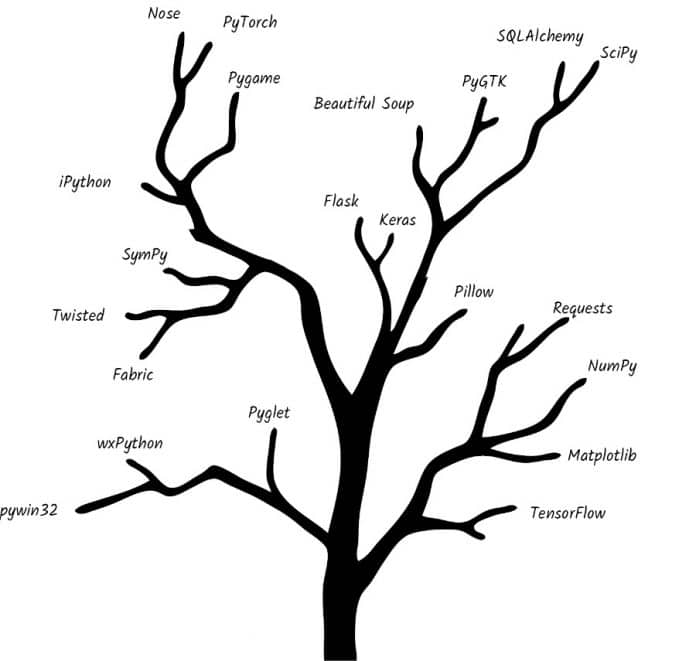 This article is aimed at newbie developers who want to master the Python programming language. It is not a complete reference work on Python libraries, but rather, highlights the various libraries that are available and briefly covers their functions.

Every language has its own libraries. To be a good programmer, it is not necessary to know all the libraries there are in any language. However, there are some libraries that every developer should know well.

The integrity of Python has led to many developers building fresh libraries for it. Because of the vast number of libraries, Python is becoming very popular among machine learning professionals too.
So if programmers get to know the following 23 libraries really well, they can accomplish a lot in their day-to-day jobs.

TensorFlow
If you are working on a machine learning (ML) project in Python, then you might have heard about this famous open source library known as TensorFlow. It was originally developed by Google in partnership with Brain Team. TensorFlow is used in every Google application for machine learning.

Matplotlib
A must for data testing and analysing, Matplotlib is an analytical plotting library commonly applied in the Python scientific computing community. It gives an object-oriented API for embedding plots into applications, using general-purpose GUI tool kits like Tkinter, wxPython, Qt or GTK+.

NumPy
This library provides advanced math functionalities and an integral package for scientific computing with Python. NumPy is regarded as one of the most popular machine learning libraries in Python.

Requests
This is a must-have for Python developers. It authorises you to send HTTP/1.1 requests, and to add headers, form data, multi-part files and restrictions with simple Python dictionaries; and to access the feedback data in the same manner.

SQLAlchemy
This offers a full suite of well-known enterprise-level endurance patterns, created for adequate and high-performing database connections, and modified into a simple and Pythonic domain language.

Pillow
A friendly fork of PIL (Python Imaging Library), Pillow is a free library for Python programming, which also adds support for opening, manipulating and saving different image file formats. It is available for Windows, MacOS X and Linux. Being user-friendly, it is a must-have for everyone who works with images.

Beautiful Soup
This is a Python package for viewing HTML and XML documents. It makes a parse tree for parsed pages that can be used to extract data from HTML, which is effective for Web scraping. It may have limited functionality but its XML and HTML parsing library is extremely helpful for beginners.

SciPy
This is one of the foundation packages that drive up the SciPy stack. It presents many user-friendly numerical routines, such as programs for numerical integration and development. The essential component of the SciPy library is that it is produced using NumPy. Its array makes the most use of NumPy.

Scrapy
This provides a fast, high-level screen scraping and Web crawling framework. It can be used for many purposes – from data mining and monitoring to automated testing.

Twisted
This is actually an event-driven networking engine written in Python and certified under the open source MIT licence. Twisted runs on Python 2 and a forever-growing subset also runs with Python 3.

Pyglet
This library provides an object-oriented programming interface that is helpful when developing games and various other visually-rich applications specifically for Windows, MacOS X and Linux.

pywin32
This is a Python library that provides some useful methods and classes for interacting with Windows.

iPython
This is based on an architecture that produces parallel and distributed computing. iPython enables parallel applications to be built, executed, debugged and monitored interactively.

Nose
This library gives an alternate test result and running process for system tests, one that is designed to simulate the action of py.test as often as is logically possible.

Flask
This Python Web framework is developed with a short core and many extensions. Flask is a lightweight, WSGI application framework that enables users to get started quickly and easily, with the ability to scale up to complex applications.

SymPy
This is an open source Python library for symbolic calculations. It intends to develop into a full-featured computer algebra system while keeping the system feasible in order to be coherent and readily extensible. SymPy is composed exclusively in Python and does not involve any external libraries.

Fabric
This is a Python library and direct-line tool for cutting down the operations of SSH for application deployment or systems administration tasks. It requires a basic collection of operations to deal with the local or remote shell commands and to upload/download files, as auxiliary functionality such as prompting the current user for information or when aborting execution.

Keras
Keras is regarded as one of the coolest machine learning libraries in Python. It has an easier system to express neural systems. Keras also has some of the best services for compiling models, processing data sets, and much more.

PyTorch
This is the most used machine learning library, helping planners to perform tensor computations with the acceleration of a GPU. It creates dynamic computational graphs and calculates gradients automatically. PyTorch offers rich APIs for determining application issues assigned to neural networks. As its name suggests, PyTorch is based on Torch, which is an open source machine library implemented in C with a wrapper in Lua.

A basic knowledge of these 23 Python libraries will help you kickstart the mastering of the libraries available in Python. You can even enrol in online courses to learn more about Python.