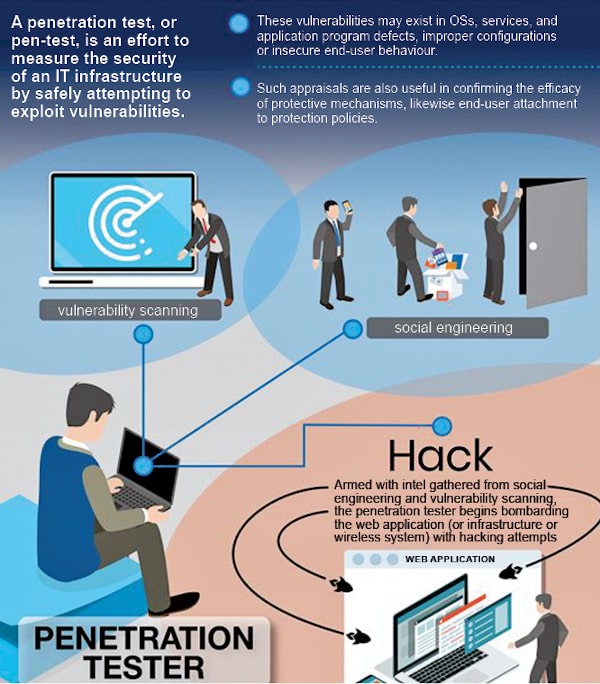 Penetration testing is a simulated cyber attack that professional ethical hackers launch to break into corporate networks to find weaknesses before attackers do. This process uses the tools and techniques available to malicious hackers. It can be automated with software applications or performed manually. In a nutshell, the process involves gathering information about the target before the test, identifying possible entry points, attempting to break in—either virtually or for real and reporting back the findings. The main objective of penetration testing is to identify security weaknesses. It can also be used to test an organisation’s security policy, its adherence to compliance requirements, its employees’ security awareness, and its ability to identify and respond to security incidents.

A penetration test can also highlight weaknesses in a company’s security policies. For instance, although an enterprise’s security policy focuses on preventing and detecting an attack on its systems, that policy may not include a process to expel a hacker. The reports generated by a penetration test provide the feedback needed by an organisation to prioritise the investments it plans to make in its security and for its application developers to create more secure apps.

The penetration testing process can be divided into the following five stages:

Planning and reconnaissance: This is the first stage of penetration testing, which involves the following activities:

Scanning: This is the second stage of penetration testing to understand how the target application will respond to various intrusion attempts, and includes the following:

Gaining access: During this stage, various attacks are performed, like SQL injection, backdoors and XSS, in order to uncover various vulnerabilities. In this stage, testers attempt to intercept the traffic, steal data and then analyse the results to assess the damage, if any.

Maintaining access: In this stage, various advanced persistent threats are performed by the pen testers to achieve a persistent presence in the system, and to uncover any hidden channels that could be used to steal an organisation’s sensitive data.

Analysis: This stage is the final outcome of the penetration test, highlighting the vulnerabilities and backdoors in the system as well as the hidden sensitive points, which could be catastrophic.

The following five are regarded as the top penetration testing methodologies and standards today.

This is a peer-reviewed methodology for security testing, maintained by the Institute for Security and Open Methodologies (ISECOM). The manual is updated every six months or so, to remain relevant to the current state of security testing. ISECOM says its main objective with the OSSTMM is to provide a scientific process for the accurate characterisation of operation security that can be used for penetration testing, ethical hacking, and other security testing. ISECOM focuses on verified facts to make sure that organisations using the OSSTMM for their own penetration testing methodologies can know they are making fact based decisions.

This framework contains a comprehensive guide for testers to identify security vulnerabilities within a network (and its components) from various potential angles of attack. This methodology relies on the tester’s in-depth knowledge and experience, as well as human intelligence, to interpret the identified vulnerabilities and their potential impact within the network. OSSTMM provides five channels to guide organisations to fully extend their security processes and determine how well they actually function. The five channels include:

This is the most recognised standard in the industry. This framework provides a methodology for application penetration testing that can not only identify vulnerabilities commonly found within Web and mobile applications, but also find the complicated logic flaws that stem from unsafe development practices.

With the help of this methodology, organisations are better equipped to secure their applications – Web and mobile alike – from common mistakes that can have a potentially critical impact on their business. Organisations looking to develop new Web and mobile applications should also consider incorporating this standard during their development phase to avoid introducing common security flaws.

This provides a manual that is best suited to improve the overall cyber security of an organisation. The most recent version, NIST 1.1, places more emphasis on critical infrastructure cyber security. Complying with the NIST framework is often a regulatory requirement for various American providers and business partners. NIST discusses penetration testing in SP800-115. The NIST methodology is less exhaustive than OSSTMM.

This penetration testing execution standard consists of seven main sections. These cover everything related to a penetration test – beginning with the initial communication and reasoning behind a pen test, right through to the intelligence gathering and threat modelling phases  (when testers are working behind the scenes in order to get a better understanding of the tested organisation). PTES also covers vulnerability research, exploitation and post exploitation (when the technical expertise of the testers comes into play and combines with their understanding of the business of the target organisation). Finally, PTES covers the reporting, which captures the entire process, in a manner that makes sense to the customer and provides the most value to it. The following are the main sections defined by the standard, as the basis for penetration testing execution:

The ISSAF standard  contains an even more structured and specialised approach to penetration testing than the previous standard. These sets of standards enable a tester to meticulously plan and document every step of the penetration testing procedure, from planning and assessment, to reporting and destroying artefacts. This standard caters for all steps of the process. Pen testers who use a combination of different tools find ISSAF especially crucial as they can tie each step to a particular tool. The assessment section, which is more detailed, governs a considerable part of the procedure. For each vulnerable area of your system, ISSAF offers some complementary information, various vectors of attack, as well as possible results when a vulnerability is exploited.

The goal behind penetration testing is to assume a hacker-like mindset, so that real-life attacks are simulated using the tools that are most likely to be used by the attackers. Conducting these tests is a time-consuming activity, and needs to be performed by properly trained individuals to get the best results.

In order to cut down on the time element, many organisations aim for automating certain parts of the process. Though the penetration tests are still monitored by a skilled security analyst or a team of analysts, many steps of a penetration test can be easily automated. For example, manually running scans on each system will take up a significant amount of time, while these steps can be easily automated by using a vulnerability scanner to scan multiple systems at once. On similar lines, automated exploit tools can be used to perform an attack.

Automated penetration testing tools have multiple key benefits for an organisation. To start with, automated scans can be performed more quickly than manual scans, and hence, the speed of detecting new vulnerabilities also increases.  Second, a security analyst will manually scan and test systems, one by one, which becomes a tedious process. Automated tools can cover a large number of systems for thousands of vulnerabilities.  Third, with automated tools performing most of the basic parts of penetration testing, your internal team is not overloaded with monotonous work. It can instead focus its time on looking out for advanced attacks.  Fourth, automated penetration testing tools can also play a major role in the compliance of certain standards or frameworks.

A number of commercial and open source automated penetration testing tools are available. In this article, we focus on the top five.

Metasploit was created by H.D. Moore in 2003 as a portable network tool using Perl. By 2007, the Metasploit Framework had been completely rewritten in Ruby. On October 21, 2009, the Metasploit Project announced that it had been acquired by Rapid7, a security company that provides unified vulnerability management solutions.

The basic steps for exploiting a system using the Metasploit Framework include:

Main features of the Metasploit Framework:

Sn1per is an automated scanner that can automate the process of collecting data for exploration and penetration testing. It uses such well-known tools as amap, arachni, amap, cisco-torch, dnsenum, enum4linux, golismero, hydra, metasploit-framework, nbtscan, nmap smtp-user-enum, sqlmap, sslscan, theharvester, w3af, wapiti, whatweb, whois, nikto and wpscan.d during a penetration test to enumerate and scan for vulnerabilities.

OWASP Nettacker is a Python based project that is tested on different operating systems including Linux, MacOS and Windows OS. The framework is compatible with both Python versions (2 and 3). OWASP Nettacker depends on the different packages in the requirements.txt file that are included in the framework’s source code directory.

Jok3r is a Python3 CLI application based automated testing framework for network infrastructure and Web black security tests. It quickly identifies the ‘low-hanging fruit’ type of vulnerabilities on most common TCP/UDP services and other Web technologies, and combines open source tools in a smart way.

Legion, a fork of SECFORCE’s Sparta, is an open source, easy-to-use, super-extensible and semi-automated network penetration testing framework that aids in the discovery, reconnaissance and exploitation of information systems, and is powered by 100+ auto-scheduled scripts.

Legion provides an easy-to-use graphical interface, unlike most tools mentioned here. It’s a modular framework, allowing you to add or customise functionalities. It’s another pen testing tool that’s written in Python, which means that it can also run on any system capable of running Python, i.e., it supports Windows, MacOS and Linux.