Home Audience For U & Me Quantum Computing: A Layman’s Perspective 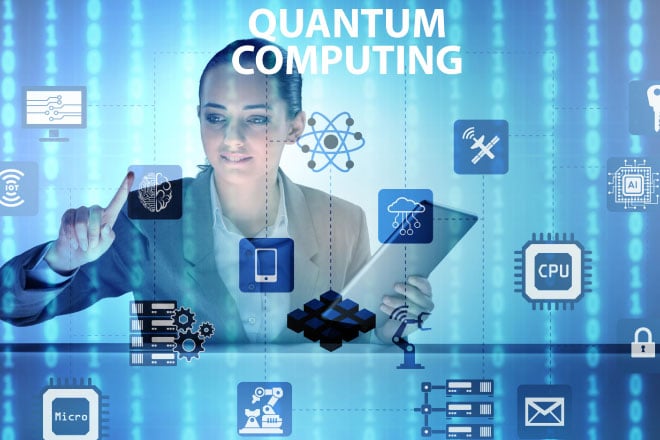 The quantum computing vocabulary
Let us begin by discussing the two terms that are often associated with quantum computing — quantum superposition and quantum entanglement. I don’t have the expertise or audacity to try to explain the above two concepts. Moreover, it takes a lot more than a short article to explain these. But let us, at least, go through the definitions of these two quantum mechanical phenomena to understand why a quantum computer is far more powerful than a classical computer (the computers we use today). According to Wikipedia, a quantum state is a mathematical entity that provides a probability distribution for the outcomes of each possible measurement on a system.

Quantum entanglement is the phenomenon by which the quantum states of a pair of particles are interdependent, irrespective of their physical proximity. Quantum superposition is the phenomenon by which a quantum system can be in a combination of several separate quantum states at the same time. Notice that the above two definitions are not rigorous enough to capture the full intricacies of these quantum mechanical phenomena. A quantum computer is a device that uses these quantum mechanical phenomena to perform computations. In quantum computers we have qubits (quantum bits) for data storage in place of bits used in the classical computers of today.

The quantum mechanical phenomenon described earlier called superposition makes qubits far more powerful than classical bits, which in turn makes quantum computers far superior to classical computers. What makes a qubit more powerful than a bit in a classical computer? In a traditional bit, we can store either a 0 or a 1. The corresponding basis values stored in qubits are represented by |0> and |1>. The power of a qubit comes from the fact that it can store a combination of the basis states of |0> and |1>, in addition to the basis states themselves, due to quantum superposition. Notice that a classical bit will be in either of the two states of 0 and 1, whereas the qubit can also be in a superimposed state of |0> and |1> and not just any one of them. The difficulty in manufacturing quantum computers arises from the fact that in order to make qubits, we need objects that can attain a state of quantum superposition between two states.

There are different ways to create a system capable of exhibiting quantum superposition. Some of the techniques involve suspending ions in vacuum by using an electromagnetic field, positioning single atoms in crystals, using photons in optical fibres, etc. But all these techniques are difficult to implement, especially when the number of qubits in a system increases. This makes the creation of quantum computers extremely difficult. Another term often associated with quantum computing is quantum supremacy. It is a term defined by John Preskill, a theoretical physicist, and it denotes the ability of a quantum computer to get a solution to a problem for which no solution is feasible by a classical computer. For example, for a classical computer it is extremely difficult to find the factors of a large semiprime (a number that is a multiple of two prime numbers). If the number is sufficiently large, even the fastest supercomputer in the world will take thousands of years to find the factors of semiprimes (this is what makes public key cryptography effective). A quantum algorithm called Shor’s algorithm can solve this problem of integer factorisation in polynomial time, making it a feasible solution.

At this stage, I would like to point out a misconception about the way qubits work. People often believe that we can store all the numbers between 0 and 2N-1 in N qubits — all at the same time. This is not the case. What we can say is that multiple readings of the N qubits in a quantum computer may yield different numbers, and the power of quantum computing comes from this fact. To further elaborate the additional power we can extract from a quantum computer, let us try to understand complexity classes.

A computational problem is said to be in complexity class P, if it can be solved by a classical computer in polynomial time. Let us say that if a computational problem is in class P, then we can solve the problem in a reasonable amount of time even if the problem input is sufficiently large, by using a classical computer. Examples for problems in class P include addition, subtraction, multiplication and division of numbers, sorting a list of numbers, searching for a number in a list, checking whether a graph contains an Eulerian cycle, etc. In general, we can say that problems in class P have a feasible solution. There are many other complexity classes also, all of which in some sense tell us how difficult it is to obtain a solution to a computational problem. For example, there are no known polynomial time (feasible) solutions to problems in class NP. Examples for problems in class NP include the Hamiltonian cycle problem, travelling salesman problem, clique problem, subset sum problem, etc. It is not known whether polynomial time solutions to these problems exist. In fact, the P=NP problem is one of the most important open problems in computer science. You could win a million dollars by solving it!

Having given the necessary introductions about complexity classes, let me dispel another myth about the power of quantum computers. People often incorrectly assume that a quantum computer will be able to solve all the problems in class NP in polynomial time. This is not what the experts believe.

In 2016, MIT (Massachusetts Institute of Technology) and the University of Innsbruck, Austria, together developed the first functional quantum computer. Though that quantum computer could only factorise relatively small numbers like 15 using Shor’s algorithm, it was a tremendous achievement as far as quantum computing was concerned. The next big milestone came in 2019. Google claimed quantum supremacy in October 2019. The tech giant developed a 53 qubit quantum processor called Sycamore, which it claimed achieved quantum supremacy by completing a computational task in 200 seconds. That computation would have taken at least 10,000 years for even the fastest classical supercomputer we have today, claimed Google. The report about the experiment, published in the famous journal Nature, can be found at https://www.nature.com/articles/s41586-019-1666-5#Abs1. Figure 2 shows Google’s Sycamore quantum processor mounted on a cryostat.

Though the news of such a quantum processor made quite a sensation in the media, the claim of achieving quantum supremacy was questioned by many. IBM claimed that the same task could be completed in under 2.5 days in a classical computer. The company also claimed that further improvements might reduce the time taken for the solution even further. Details regarding the claims made by IBM can be found at https://www.ibm.com/blogs/research/2019/10/on-quantum-supremacy/. IBM has also touched significant milestones as far as quantum computing is concerned. It has already developed tools like Qiskit (an open source SDK for working with quantum computers) and Quantum Lab (allows online code development for quantum circuits), which are available to the programming community for testing and development. Another big player in the field of quantum computing is Microsoft. Quantum Development Kit (QDK) and Q# (Q Sharp, a quantum programming language) are some of the important contributions made by Microsoft to quantum computing.

The development of these simulators has also led to the recent popularisation of quantum clouds, a platform that is trending nowadays. Yes, it is true! I have seen quite a number of advertisements offering free quantum cloud time and if entrepreneurs are pouring in their resources, there ought to be some truth behind these. Some of these quantum computer simulators are based on the quantum annealing technique. I believe that in the near future a lot of startups will come up with brilliant ideas to offer more and more quantum cloud resources. An example of quantum cloud services is the IBM Quantum Experience. It allows users to graphically build quantum circuits and develop quantum programs using Qiskit, an open source quantum software development kit (see Figure 3).