IAR Systems, the future-proof supplier of software tools and services for embedded development, today announced that its build tools for RISC-V supporting deployment in Linux-based frameworks have been certified by TÜV SÜD for functional safety development. The certification has been performed according to the requirements of IEC 61508, the international umbrella standard for functional safety, as well as ISO 26262, which is used for automotive safety-related systems. In addition, the certification covers the international standards IEC 62304 for medical software, IEC 60730 for Household Appliances, ISO 13849 and IEC 62061 for Machinery Control Systems, IEC 61511 for Process Industry, ISO 25119 for Agriculture and Forestry, and the European railway standards EN 50128 and EN 50657. 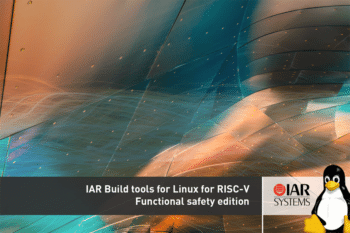 A common shared need for many organisations today is automated processes that ensure quality all the way from development into building and testing. This in combination with more and more features in embedded applications drive a need for scalable and flexible software development. IAR Build Tools for Linux make it possible to optimise resources when it comes to the time developers spend in their projects, as well as to manage and utilise licenses and servers in an optimal way. The tools can be easily integrated into different build systems, such as CMake and Ninja, and the command line build utility IARBuild streamlines building for easy integration with Continuous Integration engines like Jenkins and Bamboo, or with docker containers. With the integrated static analysis tool C-STAT, developers can ensure code quality throughout the development and testing process. C-STAT proves code alignment with industry standards like MISRA C:2012, MISRA C++:2008 and MISRA C:2004, and also detects defects, bugs, and security vulnerabilities as defined by CERT C and the Common Weakness Enumeration (CWE).

IAR Build Tools for Linux include the highly optimizing IAR C/C++ Compiler, IAR Assembler, Linker and library tools, IARBuild and runtime libraries. The IAR C/C++ Compiler adheres to a freestanding implementation of the C18  programming language standard and supports all C++17 features. In addition, C++14, C11, C89 and the IEEE 754 standard for floating-point arithmetic are supported.

With the functional safety edition of IAR Build Tools for Linux, IAR Systems provides a Functional Safety Support and Update Agreement with guaranteed support for the sold version for the longevity of the contract. Along with prioritised technical support, the agreement includes access to validated service packs and regular reports of known deviations and problems. More information about the certification is available at www.iar.com/safety.