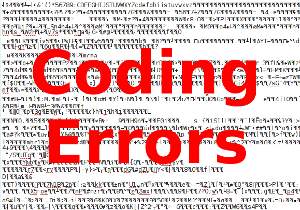 Programming/coding errors are a major cause of the software defects encountered after the software has been commercially released and is in use. Late detection of such coding errors after they have manifested themselves to end-users impacts software maintenance costs. Detecting a programmer’s error during development itself leads to lowered software maintenance costs, and helps improve the customer experience of the released software. Therefore, detecting bugs early in the development cycle is important.

There are certain kinds of common coding errors, which occur often, and a developer needs to keep a vigilant eye to avoid these. Let’s look at some of the more common variety.

Typically, programmers forget to check whether a pointer can be NULL before dereferencing it. This is known as a null pointer dereferencing error. Consider the following code snippet:

In the function foo, the variable result is set to the value obtained by dereferencing the pointer p. However, there is no check to see if p is non-null before dereferencing it. This is a bad coding error, since p is obtained as the return value from the function bar, and can be zero in certain cases.

This error, wherein the programmer does not check for a pointer being non-null before dereferencing it, is known as a “potential null pointer dereference error”. This is a difficult bug to catch at run-time, since depending on the inputs, p can be null or non-null. If the set of inputs we are using to test the code do not result in p being null, then this issue cannot be caught by testing. However, most static source-code-analysis tools can detect this issue.

In managed environments like Java, which have automatic garbage collection support, the programmer does not face the burden of explicitly having to free dynamically allocated memory after its use is over. However, statically compiled languages like C/C++, which do not have automatic garbage collection support, require the programmer to explicitly free the dynamically allocated memory.

It is important to correctly remember to free the memory after its use, while at the same time, you should not end up freeing it too early, lest you run into a “Use after free” error. Consider the code snippet given below:

On the other hand, consider the printf statement just before the return statement in function foo. This is a possible dereference of the pointer p after it has been freed, since if we reach here after passing through the else clause, p  would already have been freed — an example of a “Use after free” error.

Failure to release a lock can even lead to a deadlock. Therefore, programmers need to ensure that the resources they acquire are released as soon as their use is over, and no sooner than that. A release done too early, or too late (or perhaps never) can lead to either correctness issues, and/or performance problems.

Can you figure out the coding error in the above code snippet? Well, the programmer has made a mistake in specifying the terminating condition for the for loop. Assume that the variable p points to an array of size 10. The calling code passed the argument p and the size as 10. However, the for loop in the function initialise actually tries to initialise 11 elements instead of 10, and performs an out-of-bounds access when it tries to initialise *(p+10).

While the above code snippet is trivial enough for the error to be detected by visual inspection, such out-of-bounds accesses in real-life applications are extremely difficult to find. Tools that can detect such errors need to perform sophisticated inter-procedural analysis to detect these types of errors.

While out-of-bounds errors are typically caused by an off-by-one error in loop bound calculation, another major class of memory access error is “Uninitialised memory read”. Consider the code snippet below:

Detecting UMR errors requires tracking when a memory location is initialised. Detecting UMR errors through static analysis is difficult, and hence there are runtime detection tools to spot memory access errors like UMR. In next month’s column, we will discuss the various static and runtime analysis tools to detect software bugs.

The question comes from one of our readers, Sindoo. Here is a small code snippet, where getObject() is a method that returns an object of some class created with the “new” operator:

This code shows that the delete called on a void* does not know the type of the object. What would happen in this case?

This month’s “must-read book” is actually not a single book, but a series of columns from the C++ guru, Herb Sutter, titled “Effective Concurrency”, published in Dr Dobbs programming journal. These articles are available from Sutter’s Web page; look for articles titled “Effective Concurrency”. In fact, I would recommend all of Herb Sutter’s articles, if you want to be an effective programmer.

If you have a favourite programming book that you think is a must-read for every programmer, please do send me a note with the book’s name, and a short write-up on why you think it is useful, so I can mention it in this column. This would help many readers who want to improve their coding skills.