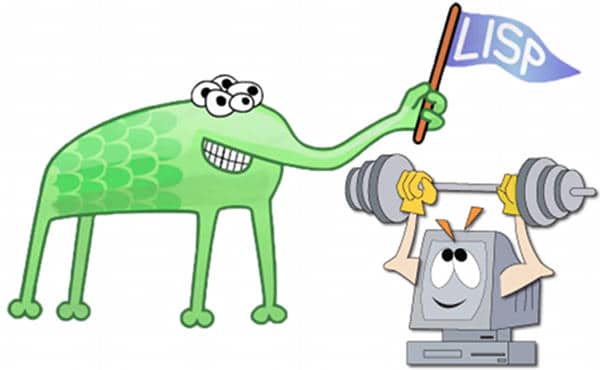 Lisp has been hailed as the world’s most powerful programming language. But only the top percentile of programmers use it because of its cryptic syntax and academic reputation. This is rather unfortunate, since Lisp isn’t that hard to grasp. If you want to be among the crème de la crème, this series is for you. This is the eighth article in the series that began in June 2011.

In rare moments of self-reflection, when I allow myself to doubt my skills as a Lisp evangelist, I sometimes wonder if I have left behind some of my fellow programmers who favour the object-oriented style of programming. Just because I have been focusing on Lisp as a functional programming paradigm, it doesn’t mean we don’t have a role for you in our plans of world domination. Read on to know where you fit in.

With an OO approach, programmers write code that describes in exacting detail the steps that the computer must take to accomplish the goal. They focus on how to perform tasks, and how to track changes in state. They would use loops, conditions and method calls as their primary flow control, and instances of structures or classes as primary manipulation units. OO tries to control state behind object interfaces.

In contrast, functional programming (FP) involves composing the problem as a set of functions to be executed. FP programmers focus on what information is desired and what transformations are required, by carefully defining the input to each function and what each function returns. They would use function calls, including recursion, as their primary flow control, functions as first-class objects and data collections as primary manipulation units. FP tries to minimise state by using pure functions as much as possible.

Conard Barski points out that the critics of the OO programming style may complain that object-oriented techniques force data to be hidden away in a lot of disparate places by requiring them to live inside many different objects. Having data located in disparate places can make programs difficult to understand, especially if that data changes over time.

If OO is what gets you going, Common Lisp offers the most sophisticated object-oriented programming framework of any major programming language. It’s called Common Lisp Object System (CLOS). It is customisable at a fundamental level, using the Meta-Object Protocol (MOP). It has been claimed that there’s really nothing like it anywhere else in programming. It lets you control incredibly complex software without losing control over the code.

Let the tears of joy flow…

#1: It is a layered system designed for flexibility.

One of the design goals of CLOS is to provide a set of layers that separate different programming language concerns from one another. The first level of the Object System provides a programmatic interface to object-oriented programming. This level is designed to meet the needs of most serious users, and to provide a syntax that is crisp and understandable.

The second level provides a functional interface into the heart of the Object System. This level is intended for programmers who are writing very complex software or a programming environment. The first level is written in terms of this second level.

The third level provides the tools for programmers who are writing their own object-oriented language. It allows access to the primitive objects and operators of the Object System. It is this level at which the implementation of the Object System itself is based.

#2: It is based on the concept of generic functions rather than on message-passing.

This choice is made for two reasons:

A key concept in object-oriented systems is that given an operation and a tuple of objects on which to apply the operation, the code that is most appropriate to perform the operation is selected, based on the classes of the objects.

In most message-passing systems, operations are essentially properties of classes, and this selection is made by packaging a message that specifies the operation and the objects to which it applies, before sending that message to a suitable object. That object then takes responsibility for selecting the appropriate piece of code. These pieces of code are called methods.

#3: It is a multiple inheritance system.

Another key concept in object-oriented programming is the definition of structure and behaviour on the basis of the class of an object. Classes thus impose a type system — the code that is used to execute operations on objects depends on the classes of the objects. The sub-class mechanism allows classes to be defined that share the structure and the behaviour of other classes. This sub-classing is a tool for modularisation of programs.

Method combination is used to define how the methods that are applicable to a set of arguments can be combined to provide the values of a generic function. In many object-oriented systems, the most specific applicable method is invoked, and that method may invoke other, less specific methods.

#5: The primary entities of the system are all first-class objects.

In the Common Lisp Object System, generic functions and classes are first-class objects with no intrinsic names. It is possible and useful to create and manipulate anonymous generic functions and classes. The concept of “first-class” is important in Lisp-like languages. A first-class object is one that can be explicitly made and manipulated; it can be stored in any location that can hold general objects.

What CLOS is not

It does not make for a great pickup conversation at the bar. I tried. It did not work!

It also does not attempt to solve problems of encapsulation. The inherited structure of a class depends on the names of the internal parts of the classes from which it inherits. CLOS does not support subtractive inheritance. Within Common Lisp, there is a primitive module system that can be used to help create separate internal namespaces.

The position class is useful if we want to create other sorts of representations for spatial positions. The x and y coordinates are initialised to 0 in all instances, unless explicit values are supplied for them. To refer to the x coordinate of an instance of x-y-position, you would write:

To alter the x coordinate of that instance, you would write:

The class-specific operations provided by generic functions are themselves defined and implemented by methods. The class or identity of each argument to the generic function indicates which method or methods are eligible to be invoked.

A method object contains a method function, an ordered set of parameter specialisers that specify when the given method is applicable, and an ordered set of qualifiers that are used by the method combination facility to distinguish between methods.

Generic functions can be used to implement a layer of abstraction on top of a set of classes. For example, the x-y-position class can be viewed as containing information in polar coordinates.

Two methods have been defined — position-rho and position-theta, that calculate the ρ and Θ coordinates given an instance of x-y-position:

It is also possible to write methods that update the “virtual slots” position-rho and position-theta:

To update the ρ-coordinate you may write:

This is precisely the same syntax that would be used if the positions were explicitly stored as polar coordinates.

You may define methods on the generic function class-changed to control the class redefinition process. This generic function is invoked automatically by the system after defclass has been used to redefine an existing class; for example, suppose it becomes apparent that the application that requires representing positions uses polar coordinates more than it uses rectangular coordinates. It might make sense to define a sub-class of position that uses polar coordinates:

The instances of x-y-position can be automatically updated by defining a class-changed method:

Inheritance is the key to program modularity within CLOS. A typical object-oriented program consists of several classes, each of which defines some aspect of behaviour. New classes are defined by including the appropriate classes as super-classes, thus gathering the desired aspects of behaviour into one class.

In general, slot descriptions are inherited by sub-classes. That is, slots defined by a class are usually slots implicitly defined by any sub-class of that class, unless the sub-class explicitly shadows the slot definition. A class can also shadow some of the slot options declared in the defclass form of one of its super-classes by providing its own description for that slot.

A sub-class inherits methods in the sense that any method applicable to an instance of a class is also applicable to instances of any sub-class of that class (all other arguments to the method being the same).

The inheritance of methods acts the same way regardless of whether the method was created by using defmethod or by using one of the defclass options that cause methods to be generated automatically.

I hope with this article I have managed to convince OO programmers that Lisp is generous enough to cater to your style of thinking. Stick with me, and I promise that you won’t be disappointed. So far we’ve seen how to fit the nuts and bolts into the engine. Next month, we’ll learn how to paint it a nice shiny red… I am referring to Graphical Programming in Lisp!