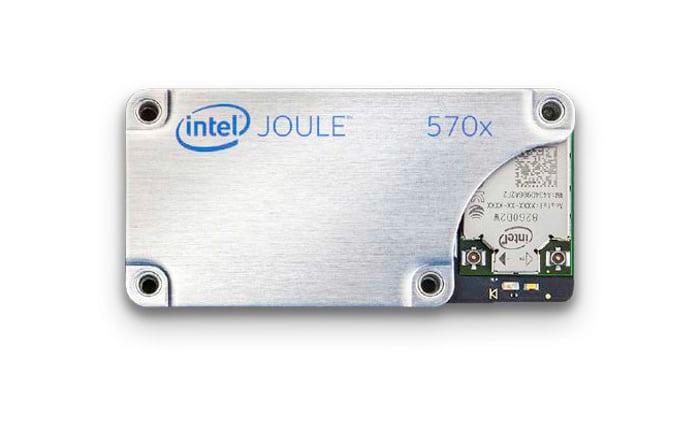 Intel astonished tech enthusiasts and software developers by unveiling the Joule as its newest compute module at the Intel Developer Forum earlier this week. The new developer board is competing against Raspberry Pi with its advanced computing performance and an all new Intel Atom processors.

Similar to Raspberry Pi, the Intel Joule comes in multiple variants. The 570x and 550x will be the initial two models. Both will come with Intel Atom (Broxton-M) SoC that has a quad-core CPU and Intel HD Graphics (ninth-generation) GPU.

The two Joule modules have connectivity options like 802.11ac Wi-Fi, Bluetooth 4.1, USB 3.0 as well as multiple GPIO, UART, MIPI and DSI interfaces. All this makes the board an ideal offering for computer vision, robotics, drones, IoT, VR, AR and micro-servers. Additionally, there is up to 16GB onboard eMMC storage along with a Linux-based operating system.

Intel has provided support for its RealSense cameras and libraries to let developers build human-like senses on the board. Further, Microsoft and Canonical are closely working with the chip maker to deliver some fresh software experiences through the new computing platform.

The high-end Intel Joule 570x development kit with the Intel Atom T5700-powered Joule module, carrier board and Wi-Fi antenna is already available for sale at $369. Whereas, the entry-level Joule 550x kit is scheduled to be launched in the fourth quarter. Other models are likely to emerge following the low-end version sometime in 2017.

Intel seems to be playing a safe game with the Joule as it is set to offer Microsoft’s Windows 10 IoT Core and Canonical’s “Snappy” Ubuntu Core broad its reach among developers. Nevertheless, Raspberry Pi already has quite a large community to make things difficult for the processor giant.

Having said that, Intel is in the field of computing modules since 2013. It brought Galileo as its first platform for the IoT world back in October 2013. The Santa Clara, California-based company also developed Edison development platform at the IDF 2014 to give developers an alternative to Raspberry Pi.