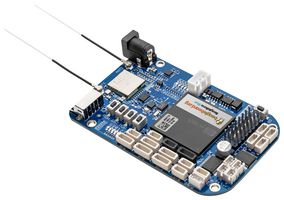 After the BeagleBone Black, element14 (by Premier Farnell) has now made available and is also shipping the BeagleBone Blue that is aimed exclusively at developers working on Robotics and Autonomous Vehicles such as drones. A major highlighting factor with the BeagleBone Blue is its Octavo Systems OSD3358 ARM Cortex-A8 processor that is clocked at 1GHz.

Other key aspects of the BeagleBone Blue include its onboard 9-axis inertial measurement unit and barometer, to enable the development of self-aligning and orientating robots that can be directed with the support of its 802.11/b/g/n and Bluetooth 4.1/BLE compatibility.

A key benefit of the TI AM3358 device is that it has two 32-bit programmable real-time units (PRUs) running at 200-MHz, thereby making it comparatively easier for developers to build robots.

To start-off, developers can use a pre-configured Wi-Fi access point, directly connect a battery, and simply open a web browser.  Those desirous of purchasing the BeagleBone Blue can check out element14’s official eStore.

“We are delighted to be making the BeagleBone Blue available to our customers. This product opens up new horizons, enabling makers and students with skills of all levels to have a go at creating their own robots or droids. Built specifically for use in the development of robotics, it’s easy to get started creating projects – either for fun or with a real-world purpose in mind”, stated Claire Doyle. global head of single board computers, Premier Farnell.

You can pick your own BeagleBone Blue from kitsNspares.com.