If you are interested in purchasing a tablet, this article will point you to the ten most popular Android tablets and inform you on their strong points.

Digitisation has made people everywhere use electronic devices like smartphones, computers and laptops to perform all kinds of tasks in a smarter way. Tablets are another way of accessing the Internet, playing games and communicating with others. They fit in your palm and are light enough to carry anywhere, easily. With a tablet, you can do as many things as you can with a computer or smartphone. You can browse the Web, play games, send and receive emails, and much more.
A tablet is a thin, flat mobile computer with a touchscreen display and many other features. The touchscreen display recognises finger prints or gestures, which it takes as inputs, replacing the mouse and keyboard. It is also equipped with many advanced features and sensors including digital cameras, microphones, etc. Tablets are typically larger than smartphones with screens measuring 17.8cm (7 inches) or more. They have the functionality of the modern smartphone and run on a dedicated mobile operating system. You can read a book that you have loaded onto the tablet, or you can play games and surf the Internet.

Today, Android devices dominate the world in comparison to BlackBerry and Apple devices. There are many versions of Android, with additional functionality and new interfaces coming out every day. The Android platform has been made available under a developer-friendly open source licence that gives more freedom and flexibility to device manufacturers when designing their products. Android is different from iPhone, BlackBerry or Symbian in primarily two aspects—flexibility and diversity. Android is more user-friendly and, being open source, anyone can access and customise it as per their needs.

Android tablets include almost all the key features found in a regular tablet PC, including office applications, games, Web browsers and many other programs. They are centred on applications or apps. Hence, the Android icons are prominent and the home screen is simple. You can delete and modify all the apps except the dialler, application tray and Web Earth. There are four buttons for navigation and a wonderful notification bar at the top of the screen.

The widget is the key feature of Android tablets and includes weather, calendar, clock, GPS and Bluetooth. In addition, you can customise the Android tablet to suit your needs. Geeks often replace the entire functionality of the Android operating system with a custom read-only memory.

There are many varieties of Android tablets available in the market. You can find many differences between Android tablets because they are manufactured and designed by different companies. Hence, it is very difficult to sum up their specifications. Android tablets are really just specialised computers. In general, most tablets contain the following hardware components:

How to choose an Android tablet

Before buying an Android tablet, you need to ask yourself a few questions, like how much are you willing to spend and whether you are prepared for a device that involves a sharp learning curve. Navigating an Android device is a learning experience. On the other hand, the operating system is friendlier and, being open source, you can tweak the settings and customise the device for yourself. Android tablets are budget-friendly, but there are dozens of different Android tablets from various manufacturers available on the market. The price of the tablet indicates the materials used to make it and the version of the operating system.

If you are looking for a tablet and thinking about buying an Android device, then there are many options for you. Let us look at some of the best-known Android tablets (a comparison of these tablets is given in Table 1).

Google Pixel C
This is perhaps the best Android tablet at its price and comes with many special features. Google Pixel C has a fantastic display, a fast and powerful processor, and a premium design. However, it is a bit heavy to carry and expensive. Its keyboard dock is not fully utilised by the Android interface. This tablet is equipped with a very good touchscreen. It has a clean stock Android interface, metal body and a great screen. It comes with a big 25.9cm (10.2-inch) display, a 34.2WHr battery and the Android 6.0 Marshmallow OS. The Pixel C is powered by NVIDIA’s Tegra X1 processor and comes with 3 gigabytes of RAM. It comes with a non-removable battery, and you can upgrade the device to Android 7.1 Nougat. 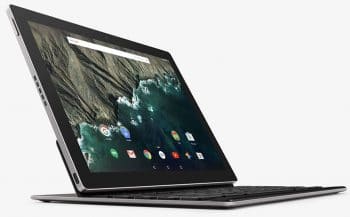 Samsung Galaxy Tab S2
This tablet comes with a thin, light design, a great screen, a good battery life and a decent camera. There are plenty of reasons to invest your money in the Samsung Galaxy Tab S2. You can use this tablet for both reading and Web surfing. The videos work better because of the power of its processor. The Tab S2 is available in 20.3cm (8 inches) and 25.4cm (10 inches) variants, with the smaller option being more portable and cheaper. This tablet is powerful and has a slicker version of Samsung’s Touch Wiz interface. 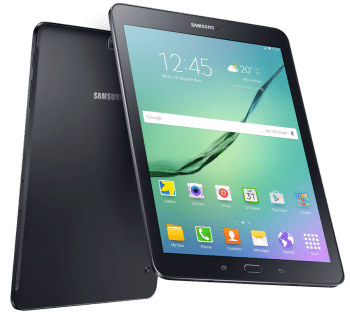 Sony Xperia Z4
The Sony Xperia Z4 tablet comes with a gorgeous display and a new improved user interface. It is one of the best
Android tablets in the market right now. It is waterproof, impressively thin, and has a super-sharp screen. In addition, the Sony Xperia Z4 has a nice-looking design. It has a great slate screen and impressive performance. Its user interface is good and it comes in two variants, with 64 gigabytes or 32 gigabytes microSD slots. It comes with a 2K display, and is one of the genuine alternatives to Apple’s iPad. 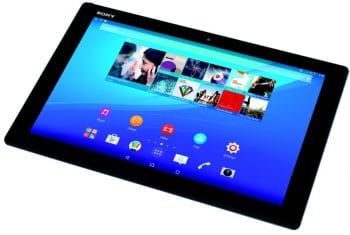 Google Nexus 9
Google created the Nexus 9 and this tablet is built by HTC. It runs the latest version of Android and you will continue to receive timely software updates for Nexus 9 tablets for another year. It has a 22.6cm (8.9 inches) display and an NVIDIA Tegra K1 processor. You can buy the Nexus 9 tablet with either 16 or 32 gigabytes of onboard storage. This tablet also comes with a big 6700mAh battery and weighs only 436 grams. Navigation, switching applications, playing games and streaming movies or videos in this tablet are a breeze. It also has a nice soft-touch material at the back that makes this tablet easy to hold, similar to the original Nexus 5 tablet. It comes with an 8 megapixel back camera and 1.6 megapixel front camera. It has a powerful 64-bit processor, Boom Sound speakers, a long lasting battery and speedy Android updates. 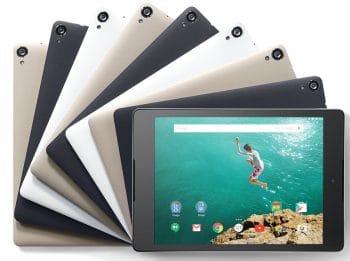 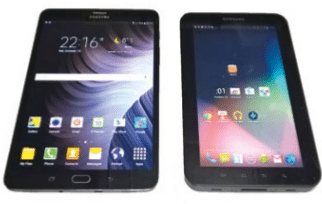 NVIDIA Shield K1
The specifications and design of this tablet are pretty much the same as other tablets. However, it additionally has a rubberised surface next to the speakers. It also comes with brushed metal lettering on the rear side of the tablet. This brand was always expensive, but now the company is trying to cut costs by not including the charger or stylus. The specifications of this tablet are listed below. 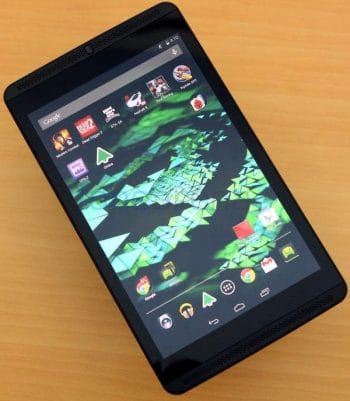 Asus Fonepad
Asus Fonepad is one of the sleekest tablets in the market. It has a 17.78cm (7 inches) IPS LCD capacitive touch screen with a resolution of 800×1280 pixels. You can use it to make calls over 3G networks. It runs on Android version 4.1, and you can download all the latest games and applications from the Google Play store. Asus Fonepad supports multi-touch, and has multiple sensors like the proximity sensor, G sensor and ambient light sensor. It comes with the Intel Atom Z2420 1.2GHz processor, enabling it to run graphics-rich games without glitches. 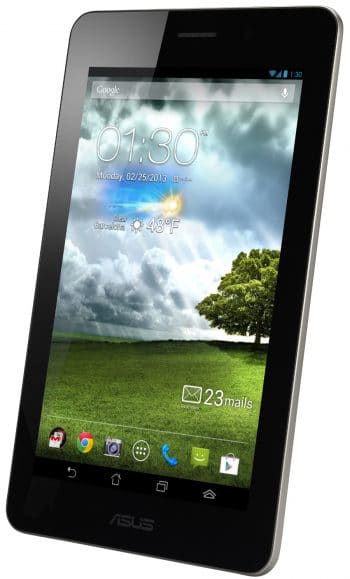 Samsung Galaxy Tab S
This tablet comes with an excellent screen and plenty of power to multitask, but it has less storage capacity. It has a thin screen and is very light to carry. This tablet is available in 21.3cm (8.4 inches) and 26.6cm (10.5 inches) variants. The Samsung Galaxy Tab S has a high speed 2.3GHz quad-core processor with 3 gigabytes of RAM. It also comes with a microSD slot, an 8MP rear camera and 2.1MP front snapper. It runs on the Android Lollipop operating system. Both the variants have fingerprint scanners for added security. However, the plastic body may put you off. This tablet is a bit cheaper because of its specifications. 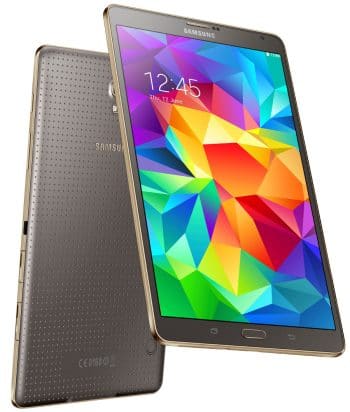 Lenovo Yoga Tab 3 Pro
This tablet is packed with media-focused features, and sports a unique and a distinctive design. It has a built-in stand, which is handy when using the integrated projector that allows you to enjoy big screen entertainment away from your TV. It is one of the best portable tablets in the market. 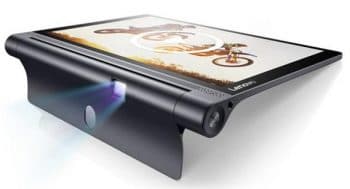 Sony Xperia Z3 Compact
This tablet has a slim design and is waterproof. It comes with a 20.32cm (8 inches) display and 3 gigabytes of RAM. It has a high capacity battery.