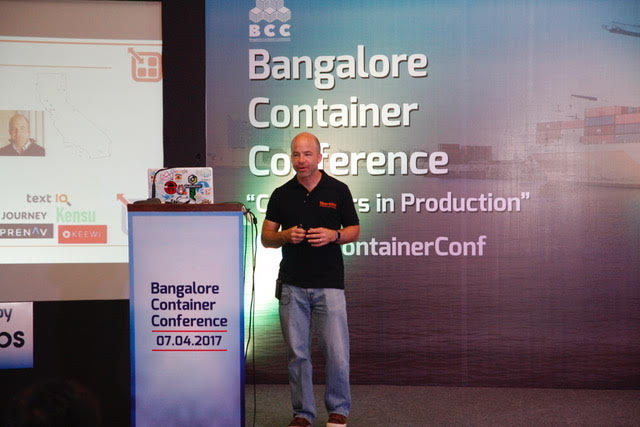 “Containers are eating the world,” exclaimed Hari Kiran, one of the organisers of Bengalore Container Conference (BCC) and co-founder of CodeOps Technologies.

In the recent past, container technologies have received considerable interest from the developer community. “It is Docker, Docker everywhere for the last few years,” Kiran told Open Source For You.

When asked about the existence of the BCC, Kiran explained why they organised the conference. “Given the fact that there is substantial interest in container technologies among developers in India, we realised that the time is ripe for organising India’s first conference on this topic,” he said.

The organisers claimed that all the tickets for BCC ’17 were sold out a month before the conference date. The conference hosted Evan Powell, chairman of OpenEBS, and Ian Lewis, developer advocate at Google, who travelled from the US and Japan, respectively, for keynote sessions.

In his opening keynote, Powell spoke about the joint relation between DevOps and containers. He explained how the DevOps industry is expected to significantly benefit from the container eco-system and technology. He also discussed important use cases, challenges and opportunities around deploying containers in production. Further, he mentioned innovative open source technologies (such as OpenEBS that provides containerised storage), and how developers can contribute to enhance existing container offerings.

Lewis, on the other hand, opened his keynote on “standards-based containerisation with Kubernetes” and explained why standards are important. He elaborated how they allow interoperability between systems and the right level of abstraction at each part of the stack. Also, he specifically mentioned about Open Containers Initiative (OCI) and detailed “cri-o”, a tool that provides integration between OCI compliant container runtimes and Kubernetes.

Organisations are increasingly adopting containers and related technologies in production. They want to learn from others’ success (and failures) and best practices. Hence, the theme of the conference was chosen to be “containers in production”. The conference had several talks by industry experts in container technologies related to the same theme.

Ritesh Modi, technology architect and senior technology evangelist, Microsoft, discussed the understanding and optimising Dockerfiles. He elaborated the methods and best practices that can be used to optimise both the Docker build process and the resulting Docker images.

Focusing on CloudFoundry’s approach towards containers, Sajith Ainikkal of Pivotal Software talked about building modern cloud-native applications without worrying about the hassles of ‘Day 2’ issues of managing virtual machines and container clusters and its adoption across enterprise segment.

As security is an important concern when using containers in production, Co-founder and Director of Appsecco Akash Mahajan tackled this critical topic through his presentation on “how to deal with application security in a container world?”

Tanmai Gopal, founder and CTO of Hasura, talked about Kubernetes as a framework for writing DevOps and microservices tooling. Deriving from his rich experience, he helped understand the Kubernetes API and the Kubernetes execution model and design philosophy. He even gave ideas on writing our own tools for fun and profit.

Following the expert talks, there was an interesting panel discussion on using “Containers in Production”. The list of panelists includes Powell and Lewis as well as Harshad Oak, Krishna Kumar and Manoj Ganapathi, who covered a wide range of topics related to the aspects of using container technologies in real-world contexts.

Alongside the break out sessions, there were two workshops where participants got their hands dirty trying out their favourite technologies on their machines.

Lewis of Google conducted a workshop on the topic “Kubernetes 101”. The code lab helped make sense of the ever-changing scalable application landscape. Lewis showed how to use Docker and Kubernetes to deploy, scale and manage microservices-based applications.

Apart from solving some vital problems of participants, organisers believe that BCC ’17 helped in providing insights.

“We got a few insights by organising BCC (which were derived from discussions and questions from the participants),” says  Ganesh Samarthyam, co-organiser of BCC. “First, there is a huge interest on Kubernetes and related topics from developer community in India. Second, beyond the hype about container-related technologies, there is a considerable need for addressing gaps in adopting them in production environments.”

The attendees provided positive responses to the BCC, as summarised by the comment from Freshdesk’s Ramya Authappan: “A day well spent! Informative talks and great discussions!”

Speakers found that the participants to be enthusiastic and knowledgeable. “It was a pleasure speaking at container conference” Microsoft’s Modi said.

Open Source For You was the media partner at BCC ’17.