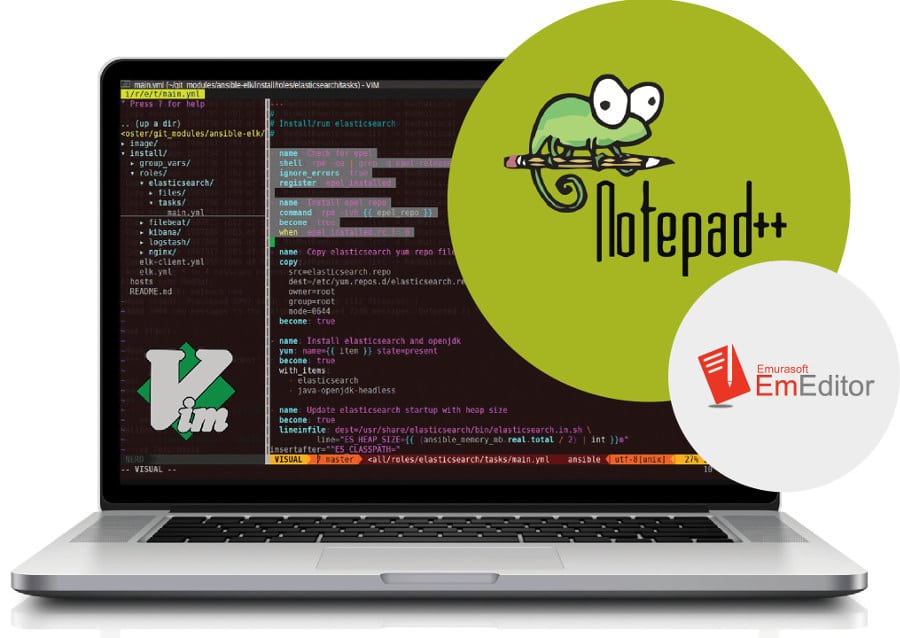 Handling large log files is problematic. Systems administrators must be able to open them to view and act upon the vital information they contain. Text editors are the best option for this task. Here is a review of a selection of these editors for our readers.

In almost every project we work on, we need to deal with files. Consider the following scenarios:

There may be various other scenarios as well but, generally, all these data and log files are text files. The difference between a log file, a text file and a data file is that a log file is generated automatically to keep track of some specific application, a text file is created by the user in a word processor, and a data file stores data pertaining to a specific application for later use. Data files can be stored as text files or as binary files, and are particularly helpful when debugging a program.

The need to handle large files carefully
The files generated in the situations mentioned earlier could be of any size, format or encoding. Besides, they may or may not contain the text in specific formats, such as comma-separated values (CSV), log data files (LDF) and master data files (MDF). These large text files may also vary with respect to the lines they have or the reason they need to be opened for. For example, the event log files for some common applications that generate a large amount of data could be more than 1GB in size and we may need to read them. As the file size increases, handling them becomes a tedious task. Generally, we come across the following issues while attempting to handle large files:

To interpret the information of these files carefully without facing such issues, we need some good editors that allow us to open, read and edit the files. So let’s discuss some basic editor tools, which could be handy for these tasks.

Notepad++
Notepad++ is an advanced and feature-rich sibling of the Notepad text editor that you find in the Windows OS. It is for those who want a very simple and easy UI with a great feature set, as it is clean, very fast and an excellent way to get work done. It is a lightweight replacement for Notepad, and is better than Microsoft Notepad in every possible way. It supports multiple tabs to open different files in a single window. It also supports multiple programming languages. Some of the languages supported by Notepad++ are C, C++, Java, C#, XML, HTML, PHP, JavaScript, VB/VBS, SQL, Perl, Python, UNIX shell script, etc.
Notepad++ is commonly known as the best HTML editor. It supports coloured lines and reports code error at the same instant. Besides, its functionality can be extended by using the hundreds of available plugins.

Glogg
Glogg is a multi-platform, open source GUI application tool for viewing and searching large, complex log and data files. It is a very quick tool as it reads data directly from disk and does not load it entirely into memory, which enables it to open very large files for viewing. Glogg is a read-only editor and does not come with a lot of features. However, it is very useful in the overall handling of large files. It can be interpreted as a graphical combination of Grep with fewer commands.

Vim
VI (Visual Interactive) is one of the main editors for UNIX systems and Vim is a multi-platform clone of this text editor. It has been written by the Dutch programmer, Bram Moolenaar, who is an active member of the open source software community. Vim stands for Vi Improved. It is considered one of the most popular text editors among developers and is perfectly customisable. It is famous for two reasons. First, it supports complete keyboard operations without any need for the mouse and, second, Vim is present in almost every UNIX-based machine. It is a free text editor, which needs a terminal shell environment, and it is also available as GVim, which is Vim with a built-in GUI.
For new users, it is sometimes hard to interact with Vim because this editor does not prompt the user for the next instructions. To learn the basic commands through gaming, you can refer to http://vim-adventures.com/.

ConTEXT
ConTEXT is a small, fast and very useful open source text editor for Microsoft Windows. It has been developed to serve as a powerful tool for software developers.

EditPad Lite
EditPad Lite is a general-purpose text editor. It can be used to easily edit any kind of plain text file. It displays content instantly because it uses pointers to access the file directly, rather than to read the entire file into memory at once. EditPad Lite has all the essential features to make text editing easy.

EmEditor
This is a powerful editor with some very great features like Unicode support and coloured syntax highlighting. It supports multi-platform files, and many files can be opened concurrently. It uses an effective approach to read large files as it spills the content onto the disk rather than loading it to memory. This helps it to open very large files with ease. One major feature of EmEditor is that it auto-detects if the CSV file has an uneven number of columns, and it tries to fix it at the same time. Its large file controller helps it to read large files at once.

LogExpert
This is a Windows tail program, which serves as a GUI replacement for the UNIX tail command. It is very good at reading large files, and is free for commercial as well as non-commercial use.

Other alternatives to consider

Now the cmd window will show you a screen with the contents of the file. This happens quickly for large files also, without any time lag. You can copy the details from there as well.