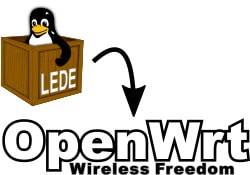 Todays open source router project that has gone live has a history.  It all started in March 2016, when a group of developers, unhappy with where OpenWRT created LEDE. They created the alternative Linux Embedded Development Environment. Their concern was that OpenWRT lacked a process to bring new core developers into the project at a time developer numbers were dwindling.

At the end of 2016, the two groups started discussing merging again, and in May 2017, they reached agreement on the terms of a merger. The OpenWRT and LEDE open source router projects have merged and promised a major release in the coming months.

OpenWRT has been known as a serious open source codebase for router firmware It allows users to overwrite vendor firmware, either for security reasons or to conduct their own low-level development.

OpenWRT/LEDE merged open source router project has now gone live. The announcement says the project will be governed under the rules of the LEDE project, and that the focus will be on small, frequent minor releases, as well as stability and release maintenance.

Support has ended for OpenWRT releases prior to 15.05 (meaning no security or bugfixes), and the project has warned that OpenWRT CC 15.05 patches will run behind time for a while since it’s “not yet fully integrated into our release automation”.

“The LEDE 17.01 release will continue to get full security and bug fix support for both source code and binary releases,” the project team announced.     Read more…