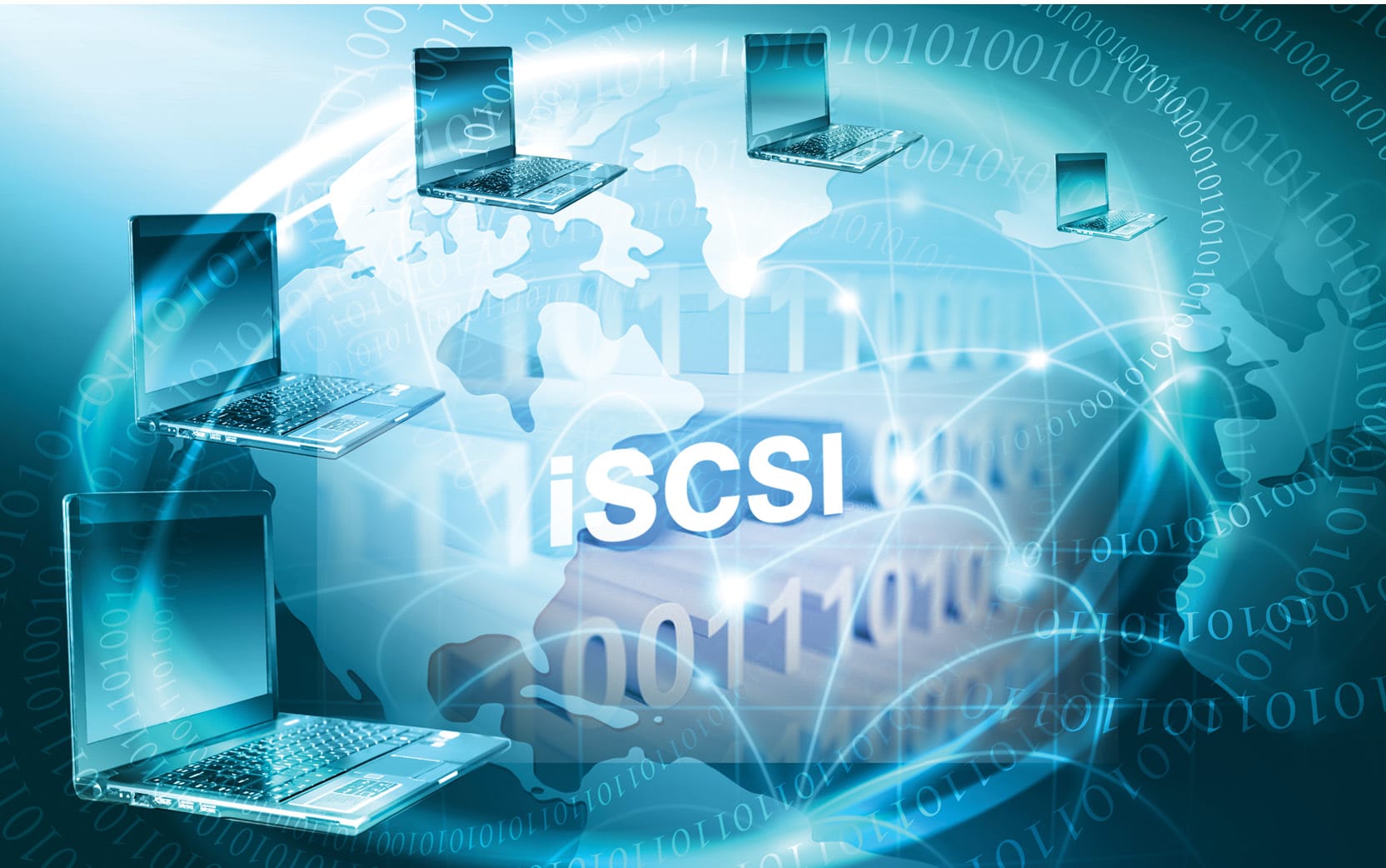 Enterprise-grade SANs require dedicated traffic infrastructure. The FC’s independent optical cabling and switches guarantee isolation. iSCSI should also be implemented on cabling that is independent of standard LAN traffic, since performance can fall due to bandwidth congestion on shared networks. Both the Internet and FC now offer copper and optical cabling options, allowing network consolidation combined with traffic classification.

Until recently, iSCSI was not considered an enterprise-grade storage option, primarily due to the use of slower 100Mbps and 1000Mbps Ethernet, compared to 4Gbps optical infrastructure. With the current 10Gbps or 40Gbps FC, bandwidth availability is now similar for both.

The use of iSCSI extends a SAN beyond the limit of local cabling, facilitating storage consolidation in local or remote data centres. Because iSCSI structures are logical, new storage allocations are made using only software configurations, without the need for additional cable or physical disks. iSCSI also simplifies data replication, migration and disaster recovery using multiple remote data centres.

1. Initiator: This is an iSCSI client, typically available as software but also implemented as iSCSI HBAs. Initiators must be given unique names.

2. Target: This is an iSCSI storage resource, configured for connection from an iSCSI server. Targets must be given unique names. A target provides one or more numbered block devices called logical units. An iSCSI server can provide many targets concurrently.

5. IQN: An iSCSI Qualified Name, this is a worldwide unique name used to identify both initiators and targets, in the following mandated naming format:

IQN signifies that this name will use a domain as its identifier. YYYY-MM is the first month in which the domain name was owned. com.reversed.domain is the reversed domain name of the organisation creating the iSCSI name. optional_string is an optional, colon-prefixed string assigned by the domain owner as desired while remaining unique, worldwide. It may include colons to separate the organisation boundaries.

6. Login: This authenticates to a target or to a LUN to begin the client’s block device use.

7. LUN: A Logical Unit Number, it numbers block devices attached to and available through a target. One or more LUNs may be attached to a single target although, typically, a target provides only one LUN.

8. Node: This is an iSCSI initiator or iSCSI target identified by its IQN.

9. Portal: This is an IP address and port on a target or initiator used to establish connections. Some iSCSI implementations use the terms portal and node interchangeably.

10. TPG or Target Portal Group: This is the set of interface IP addresses and TCP ports to which a specific iSCSI target will listen. Target configuration can be added to TPG to coordinate settings for multiple LUNs.

An overview of the iSCSI target

In original SCSI protocol terminology, a target is a single connectible storage or output device uniquely identified on a SCSI bus. In iSCSI, in which the SCSI bus is emulated across an IP network, a target can be a dedicated physical device in a network attached storage (NAS) enclosure or an iSCSI software configured logical device on a networked storage server. Targets like HBAs and initiators are end points in SCSI bus communication, passing command descriptor blocks to request or provide storage transactions.

To provide access to the storage or output device, a target is configured with one or more logical unit numbers (LUNs). In iSCSI, LUNs appear as the target’s sequentially numbered disk drives, although targets typically have only one LUN. An initiator performs SCSI negotiations with a target to establish a connection to the LUN, which responds as an emulated SCSI disk block device, which can be used in raw form or formatted with a client supported file system.

iSCSI provides for LUN masking by using ACLs to restrict LUN accessibility to specific initiators, except when shared access is intended. ACLs can ensure that only a designated client node can log in to a specific target. On the target server, ACLs can be set at the TPG level to secure groups of LUNs, or can be set individually per LUN.

Let’s go through a demonstration of target server configuration.

targetcli is both a command line utility and an interactive shell in which to create, delete and configure iSCSI target components. Target stacks are grouped into a hierarchical tree of objects, allowing easy navigation and contextual configuration. Familiar Linux commands are used in this shell. These include cd, ls, pwd and set.

The targetcli shell also supports TAB completion. An administrator can use TAB to either complete partially-typed commands or view a list of acceptable keywords at the current location in a command.

Run targetcli with no options to enter interactive mode:

Note: For such cases, a logical volume has been created: /dev/myvg/mylvm, although a simple partition can also be created.

Examples include using an existing logical volume, a disk partition, and a new file at a specified size. The backstores get displayed as deactivated.

Next, create an IQN for the target. This step will also create a default TPG underneath the IQN.

An administrator can use create without specifying the IQN to create. targetcli will generate an IQN similar to the following:

Specifying the IQN value provides the administrator the ability to use a meaningful namespace for their IQNs.

Next, in the TPG, create an ACL for the client node to be used later. Because the global auto_add_mapped_luns parameter is set to true (default), any existing LUNs in the TPG are mapped to each ACL as it is created.

The ACL configures the target to only accept initiator connections from a client presenting iqn.2018-01.com.example:client as its initiator IQN, also known as the initiator name.

Next, in the TPG, create a LUN for each existing backstore. This step also activates each backstore. Because ACLs exist for the TPG, they will automatically be assigned to each LUN created.

A number of LUNs assigned to a target means that when the initiator connects to the target, it will receive n number of SCSI devices.

Now, still inside the TPG, create a portal configuration to designate the listening IP address and ports. Create a portal using the system’s public networks interface. Without specifying the TCP ports to be used, the portal creation will default to the standard iSCSI port 3260.

Next, view the entire configuration, then exit targetcli, which will automatically save upon exit. The resulting persistent configuration file is stored in JavaScript Object Notation (JSON) format.

Now add a port exemption to the default firewall for port 3260, the standard iSCSI port, as follows:

In addition to ACL node verification, password based authentication can be implemented. Authentication may be required during the iSCSI discovery phase, and it can be unidirectional or bi-directional.

CHAP authentication does not use strong encryption for the passing of credentials. While CHAP does offer an additional factor of authentication besides having a correctly configured initiator name configured in an ACL, it should not be considered as secure enough, if security of iSCSI data is of concern. Controlling the network side of the protocol is a better method to ensure security. Providing a dedicated, isolated network or vlans to pass the iSCSI traffic will be a more secure implementation of the protocol.

An introduction to iSCSI initiators

In Red Hat Enterprise Linux, an iSCSI initiator is typically implemented in software and functions similar to a hardware iSCSI HBA to access targets from a remote storage server. Using software based iSCSI initiators requires connecting to an existing Ethernet network of sufficient bandwidth to carry the expected storage traffic.

iSCSI can also be implemented using a hardware initiator that includes the required protocols in a dedicated host bus adaptor. iSCSI HBAs and TCP offload engines, which includes the TCP network stack on an Ethernet NIC, and move the processing of iSCSI or TCP overhead and Ethernet interrupts to hardware, easing the load on system CPUs.

Install the iscsi-initiators-utils RPM, if not already installed, as follows:

2.) Discover and log into the configured target from the iSCSI target server.