iModel.js library can be used by IT professionals and developers to easily and quickly develop immersive applications that connect their infrastructure digital twins with rest of the digital world 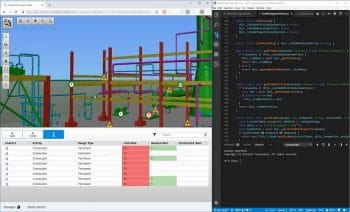 Bentley Systems, a global leader in comprehensive software solutions for advancing the design, operations of infrastructure and construction, has announced on Wednesday the release of its iModel.js library. iModel.js is an open-source initiative for improving the accessibility, for visualisation as well as analytical visibility of infrastructure digital twins.

iModel.js library can be used by IT professionals and developers to easily and quickly develop immersive applications that connect their infrastructure digital twins with rest of the digital world. The open source initiative is the basis of the company’s recently announced iTwin™ Services, which combine iModelHub, reality modeling software, and web-enabling software technology within Connected Data Environment (CDE) for infrastructure engineering.

“Bentley’s iModels have become a de facto standard for visibility into digital engineering models. iModelHub manages an iModel as a distributed database with an intrinsic ledger of changes – enabling alignment, accountability, and accessibility of its digital components – to form the backbone of an infrastructure digital twin,” according to the company’s press release.

Commenting on the development, Keith Bentley, Founder and CTO, Bentley Systems, said, “We firmly believe that iModel.js, and of course the foundation upon which it is built, is the most open, productive, intuitive, and powerful development environment for capital projects and infrastructure assets, ever.”

“With iModel.js, the well-refined techniques of mainstream cloud and web development can leverage the physical and virtual reality in digital twins with near-zero impedance. By open-sourcing the libraries we use to create our iTwin™ cloud services, we expect to foster a substantial and vibrant ecosystem of innovation,” he added.

The latest iModel.js library is a vast collection of JavaScript packages that develop on the most popular, open and flexible standards for web development and modern cloud. The library is written in TypeScript programming language, and leverages open technologies such as SQLite, NPM, Node.js, WebGL, Docker, Electron, Kubernetes, and HTML5 and CSS. The similar codebase can create cloud solutions and mobile, web, and desktop applications. The source code of the open source library is hosted on GitHub platform and is distributed under the license of MIT.

With the latest iModel.js, it is easy to create a web-based experience which displays interactive ‘nD’ views like 1D, 2D, 3D, 4D, etc, of iModels that are synchronised and assembled from BIM files and various other digital engineering models, and from data directly created with iModel.js.