Home Audience Admin How to Monitor and Manage Linux Processes

A program loaded into the memory of a Linux computer becomes a process. Processes need to be managed and monitored because they consume system resources like CPU time, memory and disk space. There are also security and safety implications. Monitoring and managing processes is, therefore, an important function of systems administrators.

A process is a running instance of a launched, executable program. It consists of:

The environment of a process includes:

An existing process duplicates its own address space (fork) to create a new (child) process structure. Every new process has a unique process ID (PID) for tracking and for security. The PID and parent process (PPID) are elements of a new process environment. Any process may create its own child process. All processes are descendants of the first system process, which is systemd in the case of the Red Hat Enterprise Linux 7 system.

In a multi-tasking operating system, each CPU (or CPU core) can work on one process at a single point in time. As a process runs, its immediate requirements for CPU time and resource allocation change. Processes are assigned as states, which change with the circumstances. The Linux process states are explained in Table 1. 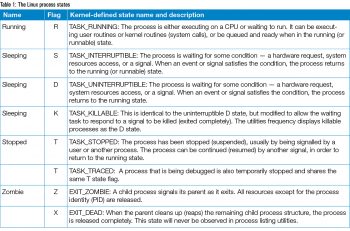 The ps command is used for listing current processes. The command can provide detailed process information including:

Important: The Linux version of ps supports three options/formats, including:

For example, ps –aux is not the same as ps aux.

A common display listing (options aux) displays all processes, with columns that users will be interested in; this includes processes without a controlling terminal. A long listing (options lax) provides more technical details, but may display faster by avoiding the user name lookup. A similar UNIX syntax uses the options –ef to display all processes. The output of some commands is shown in Figures 1, 2 and 3.

By default, ps with no option selects all the processes with the same effective user ID (EUID) as the current user, and is associated with the same terminal where ps was invoked.

A foreground process is a command running in a terminal window. The terminal device ID (tty) is the process’s controlling terminal. Foreground processes receive keyboard-generated input and signals, and are allowed to read from or write to the terminal (e.g., via stdin and stdout).

A process session is created when a terminal or console first opens (e.g., at login or by invoking a new terminal instance). All processes (e.g., the first command shell, its children and pipelines) initiated from that terminal share the same session ID. Within that session, only one process can be in the foreground at a time.

A background process is started without a controlling terminal because it has no need for terminal interaction. In a ps listing, such processes (e.g., services, daemons and kernel process threads) display a question mark (?) in the TTY column, while background processes that (improperly) attempt to read from or write to the terminal may be suspended.

Running jobs in the background

Any command can be started in the background by appending an ampersand (&) to the command line. The bash shell displays a job number (unique to the session) and the PID of the new child process. The command shell does not wait for the child process and redisplays the shell prompt.

The bash command shell tracks jobs, per session, in a table displayed with the jobs command as shown in Figure 4.

Background jobs can reconnect to the controlling terminal by being brought to the foreground using the fg command with the job ID (%job number).

The example sleep command is now running on the controlling terminal. The command shell is again asleep, waiting for this child process to exit. To resend it to the background, or to send any command in which the trailing ampersand was not originally included, send the keyboard generated suspend request (Ctrl-z) to the process. The suspend request takes effect immediately. The job is placed in the background. The pending output and keyboard typeahead are discarded.

The ps option j displays job information, including the initial command shell of each session. Since the sleep example command is currently suspended, the state flag displayed is T.

To restart the process in the background, use the bg command with the same job ID. The command shell will warn a user who attempts to exit a terminal window (session) with suspended jobs. If the user tries exiting again immediately, the suspended jobs are killed.

A signal is a software interrupt delivered to a process. Signals report events to an executing program. Events that generate a signal can be an error, or can be external events (like an I/O request or expired timer) or can be generated by explicit requests (e.g., using a signal-sending command or by a keyboard sequence).

Note: Signal numbers vary on different Linux hardware platforms, but signal names and meanings are standardised. For command use, it is advised to use signal names instead of numbers.

Each signal has a default action, which is usually one of the following:

Users signal their current foreground process by typing a keyboard control sequence to suspend (Ctrl –z), kill (Ctrl-c), or core dump (Ctrl-\) the process. To signal a background process or processes in a different session requires a signal-sending command.

Signals can be specified either by name (-HUP or –SIGHUP) or by number (like -1). Users may kill their own processes but root privileges are required to kill processes owned by others.