RDBTools is considered as the most popular management tool for Redis, with several enterprises using it to manage large RedisLabs clusters. 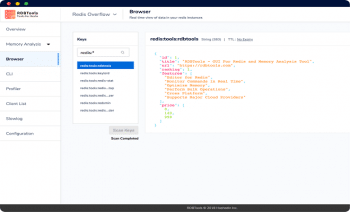 HashedIn is an IT services and consulting company that builds intelligent SaaS solutions.  RDBTools, a cross-platform graphical user interface (GUI) for Redis, was developed by the tech team at Hashedin’s Bangalore Tech Centre for the global market.

The acquisition of the software by Redis Labs in an all cash deal will put the Indian startup in the international arena.

Redis is an incredibly popular open source, in-memory database, typically used in high performance scenarios, with use-cases including application caches, message brokers and even as a primary database. Redis is currently being adopted by some of the world’s most reputed companies like Twitter, Snapchat and Github.

“Over the years one of the most popular requests from the Redis community has been a standard UI tool. After a short due-diligence process we found RDBTools by Hashedin as the most comprehensive tool available in the market today for monitoring and analyzing data within Redis. We are happy to add RDBtools to our portfolio of products, and as a commitment to our Redis community we will continue to develop and maintain the product going forward with the team that created it at HashedIn,” said Yiftach Shoolman, Founder & CTO – Redis Labs.

HashedIn Technologies had been developing expertise in Redis for some time, solving problems and developing solutions for Fortune 500 companies.

“Being a premier Redis Labs partner and having deep capabilities in Redis, RDBTools, a GUI tool was natural for us to build,” said Harshit Singhal, Chief Business Officer at HashedIn.

The software is the brainchild of Sripathi Krishnan, CTO of HashedIn Technologies.

In early 2012, Krishnan said HashedIn created an open source command-line tool to profile and debug Redis databases. This product became a hit in the open source community and large corporations such as Facebook and Alibaba found the solution seamlessly effective.

Today, RDBTools is considered as the most popular management tool for Redis. Several enterprises are using it to manage large RedisLabs clusters – including Myntra, Palo Alto Networks and Broadcom.