Home Audience Admin Use Group Office to Collaborate with Colleagues 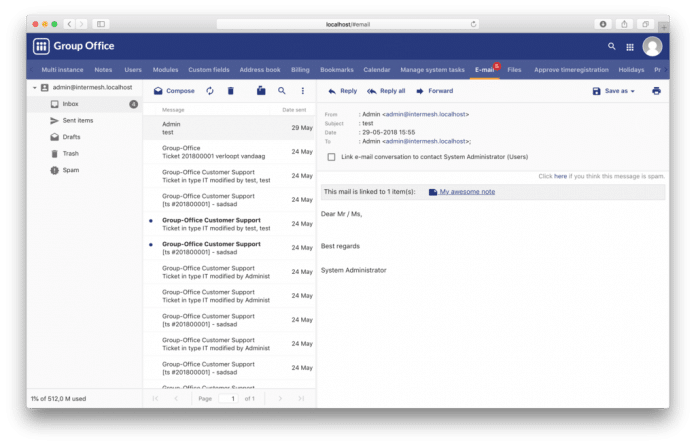 Group Office is an enterprise CRM and groupware tool, which is easy to use and is fully customisable. It is used to share projects, calendars, files and email online with co-workers and clients.

This article is about making IT managers aware about a simple, easy-to-install and maintain, open source, powerful, Web based email collaborative productivity tool called Group Office. It covers the major features needed for collaboration such as multiple email accounts with IMAP and S/MIME support, contacts, calendar, tasks, notes and file drive – all with the mobile and desktop sync client.

What is Group Office?

Group Office is an open source Web based PHP groupware application. Sharing includes all the synchronisation features for mobile and desktop use. The Group Office Community edition is released under the AGPL licence and is available on SourceForge for free download. Apart from support from the Group Office community, the developer company that created the app, called Intermesh, offers business-oriented modules like the helpdesk/ticket system, time tracking, projects, billing, etc. It also offers support contracts – both direct and through partners.

The Group Office Project made its public appearance in March 2003, and according to SourceForge, the project had over 400,000 downloads in 2012 itself. Group Office has been translated into 27 languages. Since 2010, Intermesh has primarily focused on developing Group Office modules.

Group Office 6.3 is fully loaded with new features, performance enhancements and a brand new look and feel, which is also very easy to customise. The new platform has a standardised API, a better user experience and a responsive interface for optimal display on any device. Other core enhancements with this release are:

Alternatives in the open source world

There are alternative collaboration suites available in open source like Zimbra Collaboration Suite, Kolab Groupware, Horde Webmail Edition, SoGO Groupware, eGroupWare, etc. But Group Office turns out to be a lot lighter on the server side. It is easy to use for admins and end users, with a modern look and all the synchronisation features. There’s support for everyone to build their own modules. Apart from being open source, it is very modular too, which means it’s easy to customise and extend.

One can turn features off and on. It also enables any developer to create new modules for the platform. There is a frontend for the Postfix mail server – for example, if one wants to build a Linux based mail server using Dovecot and Postfix.

Some key features planned for the road map of upcoming new releases of Group Office include Core to support Blob storage, UI enhancements (touch friendly), and support for a new backend with Flux, which will be released for each module. The email module is to have threaded view, speed enhancements via local caching of message headers, as well as new integration support for Collabora Online, Google Drive, Microsoft OneDrive, Dropbox, and external WebDAV.